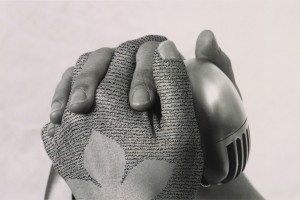 The National Museum for Women in the Arts (NMWA) – based in Washington DC – is the only museum in the world devoted to the exhibition and promotion of historic and contemporary art by women. In honour of the thirtieth birthday of NMWA and the tenth anniversary of the British associated charity UK Friends of NMWA, the charity is sponsoring an exhibition of photographs  from the museum’s collection at the Whitechapel Gallery in London.

The exhibition (18 January – 16 April 2017), Terrains of the Body, marks the first time that such a sizeable body of photographic work from the museum will be shown in Europe. One could say that the partnership between the museum, UK Friends of NMWA and the Whitechapel is cleverly matched, for the partners share an interest in breaking and nourishing fresh artistic ground.

The Whitechapel Gallery is housed in an attractive art nouveau building joined, since 2009, with its next-door neighbour, once a Victorian library. The Whitechapel was the first art gallery built to showcase modern and contemporary art, and to bring great art to the people of East London, an area that at the time of the gallery’s foundation in 1901 was known for its overcrowded slums with many immigrants, breweries, slaughterhouses and Jack the Ripper murders. The founder of the gallery was Samuel Barnett, a local vicar, social reformer and philanthropist.

Local life in the twenty-first century still retains a vibrant, multicultural atmosphere, although gentrification is spreading rapidly. Many galleries, artists’ workshops, fashionable shops and restaurants are being established. Property prices are on the rise.

Showcasing American art is part of the gallery’s history. For example, it held the first major exhibition in Britain of Jackson’s Pollock’s work, and it has also showcased the paintings of Mark Rothko, Ralph Rauschenberg, Helen Frankenthaler and Joseph Cornell. The Whitechapel has presented work by the renowned and controversial photographer Nan Goldin, and the pioneering sculpture with neon by Keith Sonnier. This year the gallery mounted an exhibition of paintings, furniture and ceramics by Mary Heilmann.

The Whitechapel is renowned for its ‘firsts’. In 1939, the gallery exhibited Picasso’s Guernica, marking the painting’s only presentation in Britain. The gallery was also the first art institution in Britain to display the work of the Mexican artist Frida Kahlo (1982) and mount major shows of the work of Gilbert & George and Richard Long (1971).  Alas, the gallery does not have a permanent art collection – acting instead as a kunsthalle – although it has archives of photographs, correspondence and ephemera relating to its history.

Terrains of the Body features photographs and a video by 17 well-known contemporary artists from all over the world, which are part of NMWA’s collection. The global context is encouraging in terms of addressing gender imbalance in the field of photography, as it indicates that there are women photographers from all five continents whose work is gaining recognition.

One could suggest that ‘terrains’ refer to the physicality of body as a photographic means of expressing feelings, qualities or narratives, be they social or political perspectives. The female body, or parts of it, becomes a symbolic landscape.
On the whole, the images are cleverly contrived, staged, far from spontaneous. Regardless of one’s experience of photography, one is instinctively intrigued by the originality of each contribution, its unconventional way of presenting the female body as a means of expression. Some of the photographers incorporate self-portraiture in their images – as Clara Peeters did over four hundred years ago.

Images by Dutch photographer Rineke Dijkstra (born in 1959) portray adolescent girls looking slightly self-conscious; their poses are stiff and their limbs constrained. One image is set against a calm sea, another a garden. They bring to mind the purity and apprehensiveness of adolescence, and Dijkstra’s ability to catch an honest portrait when the sitter’s guard is down.

Both Brazilian Adriana Varejão (born in1964) and Iranian Shirin Neshat (born in 1957) use tattooed body parts as metaphors for highlighting disturbing political and social histories. The photograph On Guard shows Neshat’s hands clasping a microphone. On the print she has inscribed Farsi poetry on one of the hands. The image evokes dichotomies in Iranian society: communication and silence, and freedom and expression.

The most acclaimed photographic work of South Korean Nikki S Lee (born in 1970) is her series of ‘projects’, each one focusing on an American sub culture, such as mid-westerners, tourists, the elderly, yuppies, and the hip hop. Each project reveals Lee in snapshot images, posing with people whom she identifies as part of the subculture. She transforms herself physically – with makeup, dress and postures – in order to ‘fit in’. Lee is drawn to see herself in other “people’s shoes”.

Mexican Daniela Rossell (born in 1973) depicts the wealth of another sub culture – the rich and famous of her native country (among whom she grew up). This sub culture – a rarefied social phenomenon – is not commonly documented visually. Rossell’s Medusa features a youngish woman wearing a diaphanous, long green dress, sprawled over a double bed; her auburn coloured hair is arranged in segments over the sheets as if each part was a serpent. She appears oblivious to the ‘baby’ encased in a ‘Moses’ basket placed beside her. Some view Rossell’s images as posters of corruption.

Although disparities concerning gender within the commercial realm of art are slowly diminishing, they still exist. Terrains of the Body helps to address the imbalance, and fosters new ways of looking at the world, encouraging us to contemplate intellectually and emotionally through the physicality of the female body. Its fresh approach complements the pioneering efforts of both the National Museum of Women in the Arts and the Whitechapel Gallery. I am looking forward to more exhibitions in Britain of work from Washington’s bastion of women’s art.

Guerrilla Girls: Is it even worse in Europe? Appropriately timed for display is the exhibition (until 5 March 2017) at the Whitechapel Gallery exploring diversity in arts organisations. It was created by the Guerrilla Girls, a group of anonymous feminist activists established in 1985. Each member takes the name of a woman artist from the past as a pseudonym; and she hides her identity in public under a gorilla mask. The women produce posters, banners, stickers and billboards, and partake in public projects exposing sexism in the arts. The Guerrilla Girls believe they have made a ‘difference’ because as a subject they are part of gender studies curriculum and thousands of copies of their art history book have been sold all over the world. The exhibition features posters of statistics gleaned from a 2016 survey of 383 arts establishments across Europe conducted by the Guerrilla Girls.

The image is a detail from On Guard from the Turbulent series, by Shirin Neshat, 1996. Gelatine silver print with ink, 11 x 14 in (28 x 36 cm). Gift of the Tony Podesta Collection. C Shirin Neshat.