In Franco Zeffirelli’s film Tea with Mussolini, there is a scene that takes place during a memorial reading of poems by Elizabeth Barrett Browning in the English Cemetery in Florence. The setting is Elysian: avenues of crumbling marble tombs and wild flowers. So when in Florence last, my companions and I ventured along where once the city’s medieval walls stood to this tiny island of graves amid urban sprawl.

We were effusively greeted by Julia Bolton Holloway, an English nun, who looks after the site. She led us to the library in the gatehouse. Here shelves are stacked with Florentine history books and others written by and about those buried in the cemetery. On site is a workshop for making copies of a sculpture of Elizabeth and Robert Browning’s 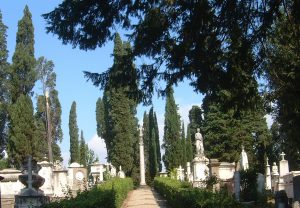 The Swiss Evangelical Reformed Church bought the land, then outside the city walls, from the Grand Duke of Tuscany in 1827 for the burial of non-Catholics. In those days, “English” was the generic word for foreigner. The cemetery was closed to new interments 50 years later when the city wall was torn down. It then came within the city limits of Florence; and it became illegal to bury the dead there.

Rambling along its paths, we passed Barrett Browning ‘s grave, sculpted by Lord Leighton, and those of Fanny Trollope, friends of Florence Nightingale and William Holman Hunt’s wife, Fanny. Sister Holloway warned us the Swiss owners are considering closure. Fortunately, the restoration fund is increasing; there is a petition calling for the cemetery to remain open and declared a UNESCO World Heritage Site. It was a visit L’Accademia could not rival.

This article was first published in the Financial Times magazine, 11 December 2006.