For Christmas my husband gave me The Penguin Book of Christmas Stories. I started to read the book on New Year’s Day. The book is cloth bound in snow white with an imprint, in deep navy, of pine trees and stars and deer and hares and birds. The festive selection is quite eclectic and surprising. It takes us all over the world, from this century to many centuries past. We meet St Anthony in a fairy tale and Truman Capote in an autobiographical story about a seven-year-old boy helping an elderly cousin to make fruitcake at Christmas in the 1930s and their tender friendship. We are immersed in the writing of Italo Calvino, Dylan Thomas and Saki and more such memorable authors. The tales are far from saccharine; some are flooded in bitterness with ripples of hope flowing through; others are painfully poignant.

The first story, The Fir Tree (translated by Tiina Nunnally), by Hans Christian Anderson, is about a fir tree. In its early youth, the tree is hungry for stature, frustrated by its size. ‘Oh, if I were a big tree like the others,’ the little tree would sigh.

‘The tree took no 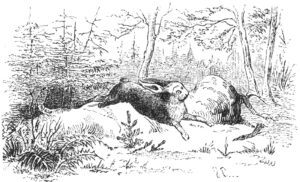 pleasure in the sunshine, in the birds, or in the crimson clouds that sailed overhead both morning and evening,’ so the tale tells us. How fervently the little tree wanted to be a magnificent ship’s mast, shorn of its branches, and travel across an unimaginable sea, which the stork said was much too complicated to describe. ‘Enjoy your fresh growth and the young life inside of you,’ said the rays of sunlight’.

When the sparrows told the little fir tree about the trees they see in the windows of houses in the town in parlours, ‘decorated with the loveliest of things: gilded apples, gingerbread, toys and hundreds of candles’ the little tree knew where, in her mind, her glorious path lay. If she could be so splendidly adorned, more fertile paths would assuredly follow.

Finally, one day the little now big fir tree was taken away from the forest. ‘An ax bit deep into its marrow.’ The tree then realized that she would never see her friends of the forests again.

The little now big, tall fir tree was brought to the town and placed in a wooden tub filled with sand which was stood in a beautiful room with Chinese vases with lions on the lids and silk covered sofas. And, it was lavishly adorned. The paper gold star at the top was truly grand and made the little fir tree feel so, so happy. Soon the children took all the decorations, for they were really presents, off the tree in a frenzy of excitement.

Suddenly the little now big fir tree felt very lonely, deeply lonely, especially when after Christmas it was dragged out of the parlour and up the stairs into a dark attic to live for months in the company of mice and rats. When telling companions about where she came from: the forest where the ‘sun shines and the birds sing’, she realized how special her youthful life in the forest had been.

Then one day the little fir tree was dragged down the stairs. Once outside, she could feel the rays of sun and smell fragrant roses. Alas, her boughs were withered and yellow. A child playing in the courtyard referred to the tree as ‘the horrid old Christmas tree’.

The dried up little now big fir tree was chopped into little pieces and once lit flared up under a copper cauldron. Before long she was a heap of ashes. The little fir tree’s destiny was inevitable, but how sad that she had never allowed herself the joy and wonderment of enjoying the life of the forest, her origins. Impatience was her enemy.

The moral of the tale may be different for each of us. Maybe it says we should not be greedy and be satisfied with what we have; cherish every passing moment. Is it asking us if a short spell of glory is worth the sacrifice of a simple life? Is it a call for patience rather than impatience? It could be a call in our times for us to be environmentally sensitive and treasure our natural resources.

After I finished reading the story, my mind jumped to the Norwegian spruce tree which has been erected in Trafalgar Square for the Christmas season. The tree stands there at the end of its life, but while it overlooks the Square, it is revered for why it came to be with us, rather than liked because it is a giant ornament. In its old age, it is admired for its raison d’etre.  Poetry is created annually in its honour. 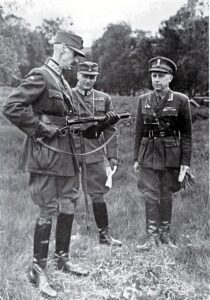 has donated a spruce tree to the British people for Christmas, as a way of saying thank you to the British for their support during the Second World War. In 1940, Norway was occupied by Nazi Germany. The British helped Norway resist the Germans, and the Norwegian navy helped the Allies fight the German forces. Indeed King Haakov and Crown Prince Olav of Norway and Norway’s government lived in exile in London throughout the war.

The Metro newspaper has reported that the ‘tree giving tradition started in 1943 when Lieutenant Donald Buller evaded German detection to deliver radio equipment to allied agents on the heavily patrolled Norwegian island of Batalden’. He returned to Britain with Christmas trees as presents for the British government and the Norwegian king. This inspired the annual tradition. Here is a short film on YouTube showing the first lighting up Christmas tree ceremony in Trafalgar Square in 1947. https://youtu.be/XvFV87ZjpYg. You will be fascinated to see how much more formally one dressed and behaved in 1947 at the ceremony, how the nature of the ritual has changed.

The tree is usually over twenty metres high and fifty to sixty years old or older. It comes from the forests surrounding Oslo. Local people refer to the tree as the ‘Queen of the Forest’. 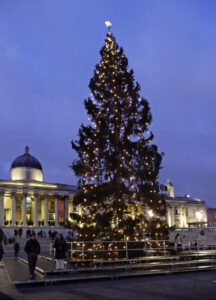 The felling of the tree is part of a ceremony attended by the British Ambassador to Norway (who is called Richard Wood), the Mayor of Oslo and the Lord Mayor of Westminster. After felling, the tree is driven by a lorry to the Port of Brevik from where it is transported to Britain by ship across the North Sea and then taken along the motor way in the early morning to Trafalgar Square. A hydraulic crane is used to erect the tree. The tree is decorated with many lights. The lighting up ceremony takes place on the first Thursday of December. It includes speeches, carol singing, readings and performances from the Salvation Army. The tree remains until Twelfth Night when it is taken down and recycled for compost.

Sadly, this year the tree has been criticized for looking ‘half dead’ and ‘spindly’ but when I went to see it, it looked healthy. What was stark about the tree was its contrast to the majestic stone buildings, including the National Gallery and St Martin in the Fields church, surrounding it.

Since 2009, poetry written about the tree by children attending Westminster’s primary schools is shared with one of the United Kingdom’s renowned children’s poets. The poet creates a poem inspired by the children’s work celebrating the present of the tree from Norway. The poem is read out towards the end of the lighting up ceremony by local school children and displayed on panels around the base of the tree. The project is organised by The Poetry Society.

This year the poem is ‘and a tree’ by Kate Wakeling who writes poetry for children and adults. She was nominated for the Carnegie Medal in 2018. Her second collection of children’s poems Cloud Soup was a Book of the Month in the Guardian and the Scotsman in 2021.  As writer-in-residence with Aurora Orchestra, Kate helped to create the Far Far Away series of children’s storytelling concerts. Collaborating with composers, such as Cecilia McDowall, is a growing part of her work. For copyright reasons I should not put the entire poem here, but I will share the last three verses with you.

“and a tree is a lesson
in the meaning of roots,
and how out of the mud
swell the sweetest of fruits,

and a tree is a story
of hope and repair,
or perhaps more a question;
a wish or a prayer,
for a tree (plus a tree)
shows us how we might share,

and what we must keep.”

If only the little fir tree could have had a conversation with Ms Wakeling and read ‘and a tree’, life in the forest would have taken on a different meaning for her. Hopefully, she would have appreciated the value of our natural resources and herself as a living source of life and beauty. She could have learned to love herself for what she is. For me the poem has a nuanced spiritual message. Our Lord would tell us that we must be thankful for what we have and thankful for all things green and beautiful, all creatures great and small. Some say that a biblical meaning of coniferous trees is that they represent the triumph of light over darkness. What might the story and the Norwegian tree mean to you?

On the first day of the New Year, 2023, such reflections are especially inspiring.

Spruce and fir trees are both conifer trees which are part of the pine family.

The first image is by Vilhelm Pederson (1820 – 1859), a Danish painter and illustrator. It is free to use as it in the public domain and the author’s life ended over 70 years ago.The second image is of King Haakon VII, Crown Prince Olav and Hans Reider Holtermanm, a Norwegian military officer in Scotland during World War II. It is in the public domain. The third image is by Christine Matthews. It shows the Norwegian Christmas tree in 2008 in Trafalgar Square, with the National Gallery in the background. It is licensed for reuse under the Creative Commons Attribution-ShareAlike 2.0 license.