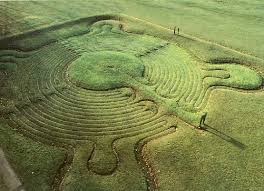 For thousands of years people have been mystified by labyrinths and beguiled by their offspring, the mazes. One might well ask: are they not the same? Why differentiate them? Indeed, Samuel Johnson in A Dictionary of the English Language, published in 1755, defined labyrinth as ‘a maze; a place formed with inextricable windings’. He quoted the poet John Denham who used the words interchangeably: ‘my soul is on her journey, do not now divert, or lead her back, to lose herself in the maze and winding labyrinths of this world’. For maze, Johnson writes ‘a labyrinth; a place of perplexity and winding passages’. The Oxford English Reference Dictionary, published in 2001, follows Johnson’s footsteps, defining maze as ‘a complex network of paths or passages; a labyrinth’, while for labyrinth it notes ‘…a maze’. However some authorities specify, with reason, differences between the two phenomena, considering their shape, location and history, albeit there are exceptions to the rule.

It is suggested that the labyrinth is a single path with a definite start, leading to a goal. The path may lead away from the centre and then towards it again, twisting and turning. It is unicursal, rather than multicursal or branch like, as is its descendant the maze. The labyrinth has no dead ends. Followers do not choose between this way and that way in order to reach the centre, as one does with a maze.

The labyrinth is regarded as a more solemn undertaking associated with ritual and spiritual and religious journeys. Jill Purce in The Mystic Spiral suggests that the labyrinth is ‘at once the cosmos, the world, the individual life, the temple, the town, man, the womb…the convolutions of the brain, the consciousness, the heart, the pilgrimage…’ The maze, in contrast, is viewed as a relatively more secular enterprise, its business is to bewilder, amuse and enchant.

Images and constructs of the earliest known labyrinthine shape, the spiral, and its square like versions, date from Neolithic times and are found all over the world, at Hopi Indian sites, in Hindu temples and Taoist shrines, in Roman mosaics and Catholic and Episcopal cathedrals, to name but a few examples. They have been carved into rocks, turf and wood and engraved in metal. We see them created from stone, set in tiles, drawn and painted.

The most famous mythical labyrinth was thought to have been at Knossos where King Minos, son of Zeus, ruled. It is the origin of the legend of Theseus who slayed the brutal Minotaur lurking within, and thereby ensured an end to Athens’s obligation to sacrifice seven youths and seven maidens every nine years to the bloodthirsty beast. This labyrinth may have actually been a series of winding passages.

In Britain, labyrinths have been found drawn on doorsteps and the floors of byres, dairies and houses in order, it is believed, to keep witches and evil spirits at bay. The idea was that the complicated design would act as a barrier to ease of entry. One name for the designs, says Janet Bord in Mazes and Labyrinths of the World, was ‘tangled threid’. She quotes the verse: ‘Tangled threid and rowan seed gar the witches lowse their speed’. In Cheshire such designs were traced in sand on a bride’s doorstep in order to thwart non-fertile influences. On the shorelines of Scandinavia we find labyrinths made with rock barriers. It is believed that sailors would walk along the paths before setting off to sea in the hope that the winds would be gentle. Fishermen prayed for a good catch. The symbolic action was meant to influence what happens in the real world and provide assurance.

In many cathedrals built during the twelfth to sixteenth centuries one finds a labyrinth with eleven rings of paths doubling back on each of the four arms to portray the Christian cross. The most famous example is at Chartres Cathedral in France. The cathedral labyrinth was sometimes referred to as ‘the road to Jerusalem’, and its centre ‘Jerusalem’. People who could not go on a pilgrimage because they were ill, weak or short of funds would walk along the path to the centre – take a symbolic pilgrimage – and in this way receive the blessing of forgiveness and hope.

The presence of labyrinths at many burial grounds prompts Gailand MacQueen in his book The Spirituality of Mazes & Labyrinths to ask: did our ancestors believe that the spiral would guide the dead to new life? Is the centre meant to be heaven? Does the moving outward journey head towards rebirth and reincarnation? Another question arises if we accept that the shape did not evolve from one source to another: what is it in mankind’s nature that inspires its creation?

The birth of the maze as we know it may have been in the fifteenth century when labyrinthine permutations began to appear in the grounds of palaces, castles, chateaux, villas, and great houses. MacQueen suggests that the evolution of the secular maze from its sacred ancestor may have occurred because religious expression became less of a physical experience, less experiential. As more and more people learned to read, religious devotion was more likely to be expressed in words. Perhaps religious leaders disdained the labyrinthine experience because they associated it with paganism. Moreover, artistic creation was no longer necessarily a function of religion or religious contexts. It was appreciated for its own sake. The ‘new’ mazes were works of art, definitely not examples of great spiritual revelation but rather the artistry of the garden designer and a showcase for his or her wealthy patron who had the funds to pay for their creation and maintenance. These were usually multi-pathed, patterned and symmetric, landscapes of purposeful trickery, often home to statues, vases, benches, seats and fountains. Gentlemen and ladies of leisure enjoyed them.

The early mazes were likely to be knee high, formed from clipped yew, box or privet, thyme or lavender. In the late Renaissance and shortly thereafter tall hedge mazes began to appear. Their height made the game of finding the way in and out that much more fun and challenging. One of the most famous examples is the trapezoid shaped one planted by William III in 1690 at Hampton Court Palace outside London which has inspired the development of mazes all over the world, some of which are almost identical copies of it. Indeed, this maze was one of the first mazes that detached the perimeter hedge from the goal, thus defeating the ‘hand on wall’ technique of finding your way through the maze, which required following the ‘wall’ with your left or right hand, around corners and dead ends and turns. If you never took your hand away from the wall, you would reach the centre. This maze is famous for its mention in Jerome K. Jerome’s Three Men in A Boat. Having been assured by their leader that finding the way in and out was so incredibly simple – ‘hardly worth the twopence charged for admission’ – a large group of visitors were lost for hours!

In many English public parks Victorian hedge mazes were constructed which inspired others to be built in relatively more public places abroad. The maze at Piedmont Park, Oakland, California had at its centre a three level pagoda. The oldest surviving hedge maze in America, dating from 1916, is in the Vizcaya Gardens, Miami, Florida.

The social and economic changes brought about by the two world wars meant that in many cases the cost, resources and labour required to maintain mazes were prohibitive. So alas it was not until the late twentieth century that their construction came back into fashion and many involved innovative and elaborate schemes. At Longleat House, near Warminster, England, there is one with nearly two miles of pathways and six bridges; the maze at Chatsworth House, Bakewell, Derbyshire, is made from over a thousand yew trees. The one at Leeds Castle, Maidstone, Kent, England was the first hedge maze with an underground passage with a grotto, which one must follow to exit. Some mazes are the shape of a dragon, tortoise, rhinoceros horn, maple leaf or footprint.

A tall maze may be composed of panels of timber. This is easy to construct, budget conscious and mobile. During the early twentieth century panel mazes were often featured at inland and seaside fun fares, especially those in America where timber was inexpensive and easily obtainable. Panel mazes enjoyed a hey day in Japan during the 1980s. At Dobbies Maze World in Atherstone, Warwickshire, England, one maze has barriers of trellises with climbing plants; another has bamboo and rhino reed barriers. At some ski resorts in Colorado, panel mazes are built for the summer period and removed in the winter to make way for parking.

Another type of temporary or seasonal tall maze is the maize (corn) maze. Maze designer Adrian Fisher notes its rapid spread across America and elsewhere in the 1990s. It offers ‘a cost effective form of farm diversification at a time of falling crop prices’. Their duration is usually about eight weeks, between the time when the corn is full height and the stalks turn brown and dry.

To make the puzzle more puzzling, some designers, in the past and present, have used mirrors as barriers in conjunction with imaginative, thematic tableaux, featuring for example scenes from magical gardens, woodlands or outer space. Water and inflatable plastic have also been used as barriers. The use of soundtracks with music, narrative and lighting sequences enhances the maze experience

Flatter mazes, those we walk upon in sight of one another, are also popular. Indeed, turf mazes existed in the past and were often found on village greens or in the countryside. They symbolised the path of life. Few survive today, as the grass, needless to say, wears out easily.

For ease of upkeep or for the sake of creativity, some contemporary turf mazes have been created so that a grass strip is the barrier. The walkways may be embedded brick, stone, tiles, gravel or mosaics. Both barriers and walkways of other modern mazes may be made from one or more of these materials. Some of the designs are rather intricate, such as that of the Tudor Rose Maze at Kentwell Hall, Long Melford, Suffolk, England.

Exploring the maze is a social occasion, leading us away from the stress of modern life, making us laugh and relax. We are entertained during a pleasurable interlude, one of surprise and novelty thanks to the maze maker’s imagination. And although we adventure far away from the solemnity and spirituality of the labyrinth, perhaps it is the joy of the ‘journey’ we need to experience in order to understand and find comfort in our perplexing world – in some way what the labyrinthine path tried to do. I wonder what Dr. Johnson would have thought of all this amazing enterprise.