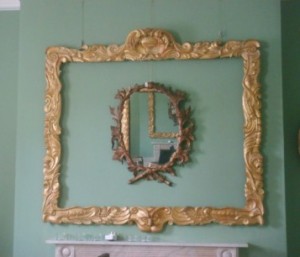 I befriended the gilder Martin Body, of Giltwood Restoration, in a most appropriate setting – at a reception given by a bank established in the late 17th century as a goldsmith-banker (see Notes below). The reception was at Two Temple Place, a recently opened public exhibition space in a magnificent neo-Gothic mansion facing the River Thames, once owned by William Waldorf Astor. On display was the work of William Morris and his colleagues.

While we were both admiring a stained glass panel, Martin and I started talking. Nonchalantly, Martin noted that as a gilder he was a great admirer of Morris and his colleagues, as through their artistic and entrepreneurial endeavour they encouraged and spawned a craftwork revival. Probably in exasperation with my endless questioning about his work, Martin offered me the gilt-edged opportunity to visit his studio.

The studio is part of Martin’s house, a four-floor classic Georgian townhouse in a peaceful London square in Camberwell, south London. The furnishings are an eclectic and complementary mix of antiques and modern pieces. Martin tells me stories about the history and personal discovery of many of the pieces.  In the kitchen there’s an old oak dresser displaying a collection of Barnstaple Pottery (also known as Royal Barum Ware or Brannam ware, after its maker Charles Brannam). Martin is especially fond of the puzzle jugs – only if one covers certain holes in their pierced necks, can one pour without spilling.

Martin had initially wanted to be a wood carver but, after studying conservation and restoration at the City and Guilds of London Art School, he was offered an apprenticeship with a gilder. He enjoyed the work so much that eventually he established his own firm in 1988, mostly using the water gilding technique for conserving antique furniture and frames, historic and contemporary sculpture and architectural features. His client list includes museums, such as the Foundling and the Victoria and Albert, galleries, churches, livery companies and multi-purpose institutions, for example the Royal Institution and the Wellcome Trust. Individuals include private clients, art dealers and contemporary designers.

The ground floor studio is roomy, light and airy, clean and tidy – the work of an organized and productive mind: materials in one place, objects in another, and extensive work surfaces.  For the sake of security the glass wall fronting an area where the public passes is really a series of textured opaque and toughened glass blocks or squares. ‘They let the light but not the eyes in,’ comments Martin. He usually works on his own, but for large-scale wood repairs or working at heights with scaffolding, he may employ other craftsmen.

Indeed, gilding – the decoration of works of art or architectural features with metal, usually gold, or specifically adhering thin metal sheets to a surface – is an ancient craft. The earliest known applications were in Mesopotamia and pre-dynastic Egypt. Not only is gold quite beautiful, but it doesn’t tarnish as silver and other metals do. Its opulence is long lasting, ever present, a symbol of wealth, power and prestige. 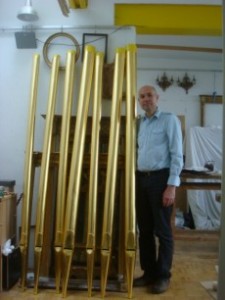 Martin usually gilds wood, sometimes working on plasterwork (ceilings, for example) or metal (as in cases of gilding a weather vane or organ pipes). He explains that: ‘yellow pine or lime are most frequently found. The French often used oak, Italians sometimes poplar. Mahogany wouldn’t be used. It would be polished, as it was an exotic import. The most detailed carving can be done in lime owing to its fine grain. Oak is a slower wood to carve. Baltic pine – slow growing and evenly grained – was used in the 18th century for making mirror frames’.

Gilded surfaces are found on ivory, glass, canvas (icons and altarpieces, for example), paper, parchment (illustrated manuscripts), stone, metal and leather, as in bookbinding. One may decorate gilded surfaces with ornamental punches that are tapped lightly with a hammer, creating rosettes or leaf shapes, for example. Patterns may be created with a stylus.  Paints or glazes are also used as decoration.  The surface underlying the gilt is called the substrate.

When practical and in the interest of historical accuracy, Martin aims to replicate the gilded surface of an object as it was when first created.  In many instances he is asked to restore objects to which gilding has been reapplied or even where gold paint (made with a bronze-based powder) has been used to create a gilded look. For the sake of gilded beauty and accuracy these layers are removed – first cleaned, using a brush or soft cloth, possibly chemicals, and then dry stripped (with a fine blade and maybe sandpaper, rather than chemicals) to reveal the underlying surfaces and the colour or tone of the gilding to which repairs can then be matched.  Humidity and temperature, for instance the warmth of central heating and damp, cause gilding to deteriorate and flake.

Gold leaf is very rarely applied directly onto a surface. The preparation of the surface depends on its nature – whether it’s wood or metal, for example. For wood, gesso is first applied as a primer. This is a mixture of white chalk or chalk-like powder, water, and size – a gelatinous or glutinous substance, often made from rabbit skin. The gesso creates a perfectly smooth surface, though it’s not meant to obscure definition. Eight or more layers may be applied for the best burnished gilding.

Afterwards, bole, which is a soft, fine-ground clay, usually a shade of red, mixed with size, is applied to add a colourful sense of richness to the gold leaf. During the reigns of Charles II (r. 1660–85) and Queen Anne (r. 1702–14), when white gold gilding was popular, a putty coloured bole would have been applied. When dry the surface is then brushed and ready for the gold leaf application. The applied gold has a matt finish. After about an hour and a half the gold can be made glossy and reflective, by burnishing the surface – which effectively presses the leaf so that it fits smoothly on the surface. The burnishing tool is a polished agate stone attached to a wooden handle. The shape and size of the burnishing tool depends on the nature of the gilded surface – whether it’s flat or carved, for example. Martin patiently demonstrates with a wooden surface.

The gold leaf comes in books, costing (at the time of my visit) £21 each, and each containing 25 leaves of 23.25 carat (see Notes below) gold leaf; each leaf is nearly 4 by 4 inches. Books of imitation leaf contain 25 leaves, of about 6 by 6 inches, and cost roughly £5. In the past ten years, gold and imitation gold leaves have doubled in price.

To apply the leaf, Martin takes the gold leaves from the book and places them on a gilder’s cushion. He uses a gilder’s knife to cut the leaf. He picks up the pieces with a thin squirrel-hair brush or ‘tip’, drags water across the object and places the leaf in position. He stores the tiny flakes of gold brushed away from the restored pieces in a jar. They look like fairy dust. The contents at present are worth some £400. One day he’ll take them to a jeweller’s in Hatton Garden. Martin purchases materials from a wholesaler in Birmingham.

Martin explains a little about oil gilding, a quicker and less expensive process than water gilding. It works especially well for exterior areas – it’s resistant to corrosion resulting from the sun and rain – and on flat surfaces, such as ceilings, as well as on plaster work and metal. After cleaning the surface to be gilded, shellac is applied if the surface is porous and then the glutinous substance – size – mixed with oil rather than water. The gold leaf follows.

I note that when I read about the art of gilding, none of the so-called experts seem to describe exactly the same process – so frustrating when you’re trying to fully understand it! Quickly, before Martin replies, I add that as he’s actually a professional gilder, what he describes and demonstrates is what I take to be the real thing! He laughs, and we agree that words are no substitute for bearing witness and ultimately trying your hand yourself.

Indeed, in light of this Giltwood Restoration runs gilding courses throughout the year for up to four people at a time. Traditional methods of gilding are explored: preparing the gesso and bole, burnishing, handling the leaves. Students are not necessarily artisans or art students. Some are filmmakers, scientists, doctors, homemakers, actors and lawyers and they come from all over the world. People may plan to take a course while on holiday, or before or after attending a conference.

Gilding is therapeutic, Martin reflects, and labour intensive. One has to enjoy the art of patience, I suggest, appreciating the wondrous fact that gilding is rooted in both the ancient history and present culture of societies the world over. It isn’t bound in time or space. Perhaps this is what makes the gilt and the gilded truly golden.

A goldsmith-banker was a maker and dealer in gold who held and lent money on deposit subject to interest; the receipts issued were known as goldsmith’s notes, payable on demand and circulated instead of gold coins.

A carat is a unit of measurement: one carat is a one-twenty-fourth part of gold in an alloy (a mixture of two or more metals). Hence, for example, 18 carat is 18 parts of gold and six parts of another metal or metals. Gold is too soft usually to use on its own, so it is hardened by adding copper, silver, nickel and/or zinc. The yellow colour of gold may be softened to pale yellow by mixing about half the gold with silver, or the colour may be deepened or made to look richer if it is mixed with silver and copper. High-quality jewellery is usually 18 carat gold; 9 carat and 14 carat qualities are also sold. Some wedding rings are 22 carat gold.

This article first appeared in Cassone: The International Online Magazine of Art and Art Books in the June 2012 issue.