Even though John Wesley, who founded the Methodist church, would not have intended his own chapel and house in London to be outstandingly beautiful, they please, almost enchant, both the eye and soul for their simple unassuming elegance. Wesley’s comment that the chapel was ‘perfectly neat but not fine’ is perhaps an understatement.  One appreciates too the peaceful, calming air of its setting, despite its location on a busy road.

Wesley considered that the poor, urban and rural, had been neglected by the traditional clergy who, ensconced in gentlemanly smugness, were betraying the true purpose of the faith to serve all mankind. He believed one should live a holy life in which luxurious consumption was an anathema. He distrusted the rich and probably perceived patronage of the arts as the province of the privileged. Gilded triptychs, ornate silver communion vessels, marble statues, and ceilings elaborately painted with religious themes wouldn’t have been a burning priority.

Wesley’s first London base was an old cannon factory, known as The Foundry. It had not been in use since 1716 when it was damaged by an explosion. Wesley bought the lease and undertook repairs. The building accommodated a congregation of some 1500, storage for Wesley’s publications, a school, dispensary, living quarters for preachers and widows, and rooms for Wesley.  When the lease drew to an end, the City of London granted Wesley a lease for a site upon which he could build a new chapel. The site was part of a field, with four windmills upon it for grinding corn, which had been recovered from swamp by dumping soil from the excavations for St Paul’s cathedral.

The Chapel was completed in 1778; also sited were two houses, one since demolished, to accommodate visiting preachers and provide Wesley with a winter London base. Today the Chapel is regarded as The Mother Church – the Cathedral – of World Methodism. A small chapel, referred to as the Foundry Chapel, annexed to the main Chapel, contains pews from the original Foundry and an organ similar to one that was made for Handel, which belonged to Charles Wesley, John’s brother. Charles is acclaimed for his inspiring hymns (including Hark the Herald Angels Sing); he was also a fervent Methodist.

The rectangular-shaped Chapel has five front bays, and two storeys, one with a gallery. It was designed by the architect George Dance, the Younger, one of the founding members of the Royal Academy and once the Surveyor to the City of London. (Sir John Soane was one of his pupils.) The gilded white plasterwork ceiling with rosettes, subtle fanning and fluting is especially commendable. It was believed to be the widest unsupported ceiling in England at the time it was constructed. Indeed, the present one is a replica using casts from the original, damaged by fire in 1879.

The mahogany carved communion rail and centrally positioned pulpit are original, the latter being initially 15 feet high with three sections (and since lowered). The height of the pulpit and its central position reflect the importance Methodists attached to the power of the word. Other threats to the structure of the building, besides fire, have been the swampy ground underlying it and the ticking of the wood-boring Deathwatch beetle in the roof, necessitating the installation of new roof beams and concrete foundation piles.

A precentor holding a tuning fork led the singing until the end of the 19th century, when an organ was installed. Originally, the pillars supporting the gallery were ships’ masts given by King George III, but in 1891 they were replaced with pillars of French jasper. In the apse are memorials to the two Wesley brothers and other prominent Methodists. The stained glass windows include two dedicated to American bishops. Around the length of the gallery is a motif in relief supposedly chosen by Wesley: a dove with an olive branch in its beak encircled by a serpent following its own tail.  Speculation concerns Wesley’s intended meaning: eternity, goodness, peace, or creative life force?

Many memorable services have occurred in the Chapel. In 1951, the former British Prime Minister Margaret Thatcher, who was brought up as a Methodist, was married there. In 1978, Queen Elizabeth II attended a service at the Chapel marking its extended refurbishment. She was the first reigning monarch to visit. 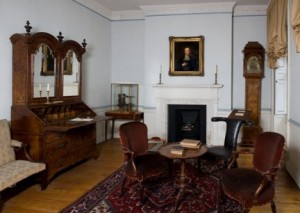 Wesley’s sympathetically restored house would have suited a middle-class Georgian family. After being welcomed at the house, we are directed downstairs to the former housekeepers’ quarters, where items belonging to Wesley and his family are displayed, such as Wesley’s gown and preaching bands (neckwear), and a letter of advice and a collection of poems written by Wesley’s father. One case exhibits ‘Wesley pottery’: plates, jugs, loving cups (two-handled vessels) and a chapel.  We also visit the 18th-century kitchen, furnished with the dresser and kitchen table once used by the Wesley household. Street standpipes would have provided water for cooking and washing, as there was no running water.

Once upstairs, we view the dining room, where there is a modern reproduction of Wesley’s chamber horse, a type of exercise machine. Wesley believed that bouncing upon it daily (in lieu of the real thing) helped to keep the lungs clear. Wesley liked and advocated plain, healthy fare – drink and meat in moderation. He supported the medical philosophy of the day, which advocated matching one’s bodily intake to the climate in which one lives. For example, people living in England, which has a cold, damp environment, should eat cold and non-spicy food, such as bland salads. Cold water for bathing, he believed, increased strength and stamina. It is not surprising that Wesley stipulated that servants and visitors should be ready for morning prayers at 5 am. and in bed by 9 pm.

In the back parlour, or sitting room, we find built-in cupboards with drawers underneath, rather than open shelves, an unusual feature in a house of this period. Wesley occupied the three rooms on the first floor. There is a small bedroom with prints of John Wesley’s family and a reproduction Hepplewhite ‘field bed’ (four poster bed with an arched canopy), a prayer room with a Queen Anne walnut ‘low boy’ and a kneeler, and Wesley’s study or drawing room, with Wesley’s bureau and a portrait by William Hamilton RA of Wesley. One can sit on the ‘cock-fighting’ chair in the ordinary way, or straddle it so that the one’s arms rest on the padded top of a sloping back, which is fitted with a board as a support for writing. Wesley used the electrical machine displayed for treating depression (‘shock therapy’), epilepsy and other ailments, in his dispensary.

On the second floor are the ‘Preachers’ bedroom’ and drawing room, with a tallboy for storing linen and clothes. Clothes were laid on the pull-out shelf in the middle and brushed to remove dirt and dust before they were worn. Guests also used the floor above, which is not open to the public. After Wesley died the house continued to be used as the minister’s manse until 1898 when it became a museum. Wesley is buried behind the chapel in a small leafy graveyard.

While walking home after my visit, I passed through Bunhill Fields, the graveyard across the way where John Bunyan, Daniel Defoe and William Blake are buried.  I imagined men, women and children, carrying their lanterns in the early hours of a dark winter morning, arriving at the Chapel to pray with Wesley. A painting of the scene would shed light upon the power of his words.

It is unlikely that Wesley would have encouraged, or indeed have approved of, the Methodist Art Collection, created over 30 years ago by the Methodist Church in Britain. The Collection includes more than 40 works by artists such as Elisabeth Frink, Graham Sutherland and Ceri Richards.  Its purpose is to encourage people to think about the Christian message, each creation reflecting the life and work of Christ, in a specific, broad or abstract context. The Collection is not oriented towards Methodists in particular; some of the artists are not Christian. A ‘visual encounter is often more intriguing…less doctrinal, more open-ended and enables a conversation’, believes Geoff Cornell, a Trustee of the Collection.

For Wesley believed passionately in the power of the word, rather than the image, to spread the gospel, and this he encouraged through itinerant preaching and his own publications. Hymns also fired the spirit of piety. Indeed, while the present Methodist Church in Britain acknowledges its  ‘fine tradition of praising God through music and speech’, it recognises its historic lack of involvement in ‘movement and arts’.

John Wesley was the son of a scholarly Anglican rector, a former nonconformist. His saintly, scholarly but strict mother, Susanna, the daughter of a nonconformist minister, was a major influence upon his life. He studied at Oxford and was ordained in 1728.

Wesley organised medical care and distributions of food and clothing for the poor. He encouraged preventive medicine (exercise, fresh air, cleanliness, etc.) and the use of natural remedies, some of which he dispensed. Over 20 editions were printed during his lifetime of his book of medical advice, Primitive Physick.

Photographs of the interior of the Chapel and John Wesley’s study ©The Museum of Methodism and Wesley’s Chapel.

This article first appeared in Cassone: The International Magazine of Art and Art Books in the June 2013 issue.