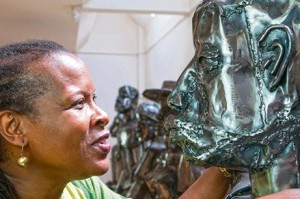 S0kari Douglas Camp’s mod­ern house and adjoining studio call to mind a chapel. Designed by her husband, the architect Alan Camp, the building has a simply patterned brick façade, tall, arched windows, rounded glass, and brick rooftops. Inside, the double­ height kitchen and dining areas form the ground­ floor living space. There is ample room for people to gather.

The substance and scale of Douglas Camp’s home is reflected in her sculpture. Her huge steel piece All the World is Now Richer, which commemorates the abolition of slavery, and salutes its survivors, is touring the UK this year. It will be featured at Cheltenham racecourse over the August Bank Holiday (2014), as part of the Greenbelt Festival.

Born in Nigeria, and educated in the West, Douglas Camp’s work has a decidedly international flavour. Her pieces are in permanent collections in the British Museum in London, the Smithsonian in Washington, DC, and the Setagaya Art Museum in Tokyo.

Sokari was shortlisted for the Fourth Plinth in Trafalgar Square in 2003; and, two years later, was appointed CBE. She is currently a governor and honorary fellow of the University of the Arts, London.

The sculptor is also a storyteller. ‘I love context, and I like to tell,’ she says. ‘I want to talk to the world. My mother was a great source of inspiration. When I was a child, she told us wonderful stories. She was better than TV. She would sing the stories. Art speaks — to have art is as essential as breathing.’

Douglas Camp ‘speaks’ predom­inantly with steel, but also with plastic, wood, feathers, acetate, glass, paint, silver, and gold leaf. ‘Steel is so elastic and flexible,’ she says. ‘It has rhythm. You can draw with it, and cut parts of it out easily. It can appear both light and heavy.’ Indeed, she can make metal look as delicate as silk or lace.

The curator Meryl Doney, who, in 2007, organised an exhibition of her work at the Wallspace gallery in London, says that, although Douglas Camp ‘works with tough materials, she’s not at all tough in a traditional sense of the word — an angry young woman. She’s a small, charming person’.

Her sculpture — mostly of people, sometimes objects, all reflecting human experience — addresses a multitude of social, political, and spiritual issues, as befits her background.

‘My father was a Kalabari chief, and a fisherman, who was away for long periods of time, marketing his fish,’ she says. ‘I loved his boat, a dugout canoe with a thatched roof and a wood­burning stove in the middle. He had ten wives — my mother was one of them. Each time he travelled, he’d take a different wife with him. She would tend to the cooking, and help him steer, and paddle the boat.

‘My mother sold palm oil at local markets. My elder sister, a civil service employee, married an English anthropologist, Robin Horton. They were very much in love. When my mother became unwell, I went to live with them, and was immersed in an academic world of philosophers, and artists, all sorts of people. Robin’s grand­ father and uncle were impressionist artists.

‘Robin gave me my first set of paints, at a time when Nigerian artists were not only bursting with confidence, but on the international art scene, when there was an emerging renaissance of Nigerian art. I realised that art could be a job.

‘When my sister died in childbirth, Robin went to pieces. Having me to care for gave him a sense of purpose. It was the white man and me. Some people thought that our relationship was perverse. He sent me to boarding school in England: first, to an all girls’ Roman Catholic school in Oxford. But I was very unhappy there — the nuns were more interested in teaching us to be good wives than providing a decent education.

‘Then Robin sent me to Dartington Hall School, where I really enjoyed making jewellery, life drawing, pottery, sculpture.’ After Dartington, she studied at the California College of Arts and Crafts, Oakland, and then came to London to concentrate on sculpture at the Central School of Art and Design, and the Royal College of Art. She met her husband in Nigeria. The couple have two daughters, both of whom are artists.

Religion is particularly im­portant to Douglas Camp. Despite having been raised as a Baptist, she regularly attends her local Anglican church, in south London, and helps out at Sunday school.

‘It’s wonderful teaching the younger children what it’s all about. I love meeting and getting to know so many different people. Church cleanses me. It gives me peace, the strength to care for, and love, my family, the faith to do my job.’ Arguably, it also motivates her to engage with ‘big’ problems in both Nigeria and the West, and to create her own visual language.

A case in point is her larger­ than­ life mobile, Battle Bus: Living memorial for Ken Saro­-Wiwa (1941­ – 1995). It pays tribute to the Nigerian environmental and human ­rights activist, who tried to stop the petroleum industry from causing environmental damage in the Niger Delta among the Ogoni people. His execution, on false charges, by the military government provoked international outrage. Saro­Wiwa’s words are inscribed on the bus: ‘I accuse the oil companies of prac­tising genocide against the Ogoni,’ thereby ensuring that his voice, and Douglas Camp’s, travel with the bus.

The work was commissioned by an organisation that promotes social justice and environmental safe­guards, Platform. The bus is a vehicle ‘of hope, and information’, turning ‘Nigeria’s shame over Ken Saro­Wiwa’s [treatment] into some­ thing constructive’, Douglas Camp says.

Another resonant piece, Church Ede, owned by the Smithsonian Museum, is a Kalabari funeral bed, traditionally decorated with lace for a Christian wake, and a reminder of Douglas Camp’s father. The stick­like figures, bed frame, and bed give the creation a frail, mournful air. The (motorised) mourners wave the flies away with their handkerchiefs, and the bed shakes with the force of the father’s spirit. The fact that the father’s body is not featured makes his absence that much more painful.

In some of her sculptures, Douglas Camp captures the day ­to­ day rituals of ‘ordinary’ women, sometimes strolling with, or car­rying, their children, or shopping in a south ­London market. For her, they are the unsung heroes, coping daily, with dignity, with poverty, strife, degradation, and disappoint­ment. The sturdy, sinewy bodies, square jaws, and angular faces of the women express their steely determination to survive. ‘Women tolerate the most extraordinary things,’ she says.

Another significant strand of Douglas Camp’s work depicts Kalabari masquerade performers, of the people with whom she grew up. Masquerades are ceremonial events, with music and dance. Participants wear masks and costumes that enable them to communicate with, and embody, ancestral spirits, losing their every­ day identity. Human and animal features — repulsive, frightening, comic — together with symbolic, traditional patterns, are characterised by the masks. They are worn so that the face looks at the sky, effectively attracting the souls of spirits.

Douglas Camp’s configurations make the sculptures look as if they are vibrant phenomena — in a sharp contrast to the static ethnographic displays in museums, which represent masquerade by showing only the masks. She sets the masks within their context.

It is particularly significant that this has been created by a masterful woman using the ‘stuff’ of industrial technology, often seen as a male bastion. The Ekine (masquer­ade) society of the Kalabari people, although founded by a female deity, does not welcome women as performers, or costume designers. It is taboo for women to be able to identify the performer. Douglas Camp effectively blows the whistle on such misogyny, in both hemispheres.

Douglas Camp imbues some of her work, such as Freud — White Sacrifice, with a hint of mockery. In this sculpture (which stands by the family’s dining­ table), Sigmund Freud, in suit and top hat, his face dour, with a sickly pallor, sits with his legs crossed. He is attached to a couch, on which lies a woman, with her arms crossed over her bared breasts.

By the use of a mechanism, the bed can be turned round and round, implying that Freud is exploiting women’s vulnerabilities, gnawing away at their self-­esteem. The piece seems to ask whether or not Freud’s physical aloofness encourages the healing of a confused soul. 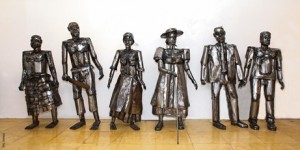 All the World is Now Richer is touring the UK next year. It will also be shown at Bristol Cathedral; St George’s Hall, Liverpool; and in Norwich.

It not only commemorates the abolition of slavery, but pays tribute to the strength, bravery, and con­tribution to our heritage of people with slave ancestry. In a wider context, it celebrates all people of colour who overcome prejudice.

‘People’s fear of black skin, even today, is amazing,’ Douglas Camp says. ‘I remember seeing a little girl recently who looked petrified when she came to face to face with a black person. I know that black people have done bad things, but they haven’t done that many bad things.

‘We are stig­matised only because of our colour. I feel the stigma every day, as I am black every single day of my life. I want to change this view, and for people to celebrate our achieve­ments, not our failures; how we’ve survived in spite of denigration and victimisation. I want people to appreciate the breadth of the black story, not just think of it as another tale of slavery.’

The more ­than ­life-size figures represent successive stages of the saga of slavery. Each one casts a ‘shadow’ formed by a quotation, formed out of steel, from Prescott’s statement.

The first figure is clad in indi­genous robes. Alongside him are two slaves: a formidable and muscular male plantation worker with a machete, and a domestic serving woman.

The next three figures are from the post­-liberation era: a Sierra Leonean woman in 19th ­century Creole dress; a man in a contemporary executive suit — ‘He proves that black men can live this role just like white men, become high achievers. In a way, though, he’s a slave, a slave to his work’ — and a young man dressed in a T­ shirt, casual trousers, and trainers, the final figure in the sequence. ‘He’s free, mobile, with no ties and no worries,’ explains Douglas Camp.

Douglas Camp is trying to find a permanent home for the figures. She has set her sights on the South Bank, London.

Douglas Camp has recently been placed on a shortlist to create a memorial to the 19th century black American civil ­rights activist Octavius Catto. The memorial would stand outside the Town Hall in Philadelphia.

‘Some people question why I, or anyone, should have the right,’ says Sokari, ‘the arrogance, to want to put something in the public realm. But I believe there’s value in what I am doing, what I’m trying to say. The world is full of prayer, of hope.’

This article first appeared in the Church Times, 9 August 2013.