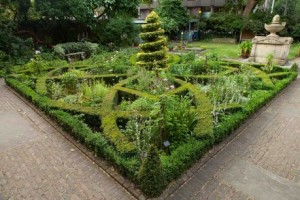 The road from Waterloo to the Garden Museum is loud, busy and sooty. Cars whizz by as if on an autobahn. I’d like to turn around and go home, but, as a gardener, the idea of the museum is compelling. I have read so much about it and always wanted to visit. Lambeth Palace, which abuts the museum, eventually looms into view.  Soon I enter a small park facing the entrance to the museum, which in its previous life was a church, later deconsecrated and abandoned with a jungle of weeds and rubbish in the graveyard.   Once past the iron gates, one immediately senses a tranquillity, a spiritual ascendance. Maybe the railings are magical sound barriers.

The museum was established in 1977 (and officially opened in 1981) in order to create the first museum in Britain devoted to the nation’s garden history, to save the church of St Mary’s from demolition, and to pay tribute to former parishioners John Tradescant  (1570–1638), one of the first British pioneering gardeners and plantsmen, and his son, also John (1608–62), who followed in his footsteps.  The family tomb rests in the garden. The Tradescants regularly allowed members of the public to view their gardens, orchards and curiosities. Their home, with its vast collection of birds and beasts, amassed from all over the world, was known as ‘the Ark’. It’s said that the rarities were recognised as a unique educational asset: ‘of all places in England [it is] best for the improvement of children in their education, because of the variety of objects which daily present themselves to them…’ wrote a schoolmaster contemporary.

After the death of John Tradescant the Younger, the collection of rarities inspired the establishment of the Ashmolean Museum in 1683 by a rather conniving and self-aggrandising neighbour, Elias Ashmole, whom many felt acquired the rights to the collection by means verging on the sharp. It’s believed that Ashmole tricked his second wife, Hester, the younger Tradescant’s widow, into signing a Deed of Gift, enabling him to assume control of the collection.

An idea of the encyclopaedic extent of the collection is given by the account of a German traveller, Georg Christoph Stirn, written in 1638. He lists such gems as two ribs of a whale, ‘a very ingenious little boat of bark’, a salamander, a chameleon, a remora (a fish with a sucking disk on its head enabling it to attach itself to a shark or whale or ship’s hull), a lanhado (which I’m having trouble identifying!) from Africa, a flying squirrel, ‘a piece of mummy’, an elk’s hoof with three claws(!), a human bone weighing 42 lbs., ‘the robe of the king of Virginia’, ‘a scourge with which Charles V is said to have scourged himself’.

The museum’s garden was for the most part designed by the museum’s President, the Dowager Marchioness of Salisbury. Its heart and Lady Salisbury’s pride of place is the knot garden. Lady Salisbury is renowned for reviving the gardens of her late husband’s family home, Hatfield House, a stately red brick Jacobean house 20 miles north of London. John Tradescant the Elder is credited with having developed the gardens of Hatfield House for her husband’s ancestor, Robert Cecil, first Earl of Salisbury, adviser to Queen Elizabeth I.  Indeed, in common with the Tradescants, Lady Salisbury has no formal horticultural qualifications.

Lady Salisbury reveals that the planting scheme was inspired by Tradescant’s lists of plants bought for Hatfield, his bills and details of his travels, all of which she found in the family archives. The family’s 16th- and 17th-century books describing and illustrating gardens of those ages were also great guides. Lady Salisbury determined that a memorial garden for the Tradescants should be a formal one and feature plants of the 17th century, with at its core, a ‘knot’, a garden design used at both Hatfield and Cranborne, another family home, by John The Elder.

The knot garden is outlined in box hedges. To mark the Tradescants, an initial ‘T’ on each side is planted in silvery grey cotton lavender, Santolina chamaecyparissus.  The garden features plants of interest for every season, starting with snowdrops, crocuses, Hepaticas and Narcissus, and including Scillas, tulips and the Fritillaria imperialis, 16th- and 17th-century roses, Martagon and Madonna lilies, and herbs. The walls of Lambeth Palace and the church partly enclose the garden.  To add the sound of running water, Lady Salisbury found a stone wall-fountain in Italy, which is mounted on the lower east wall.

Elsewhere in the garden are other plant species introduced into Britain by the Tradescants, such as the scarlet runner bean, red maple and tulip tree. The Tradescants are also credited with introducing the Yucca, the London plane tree, the Acacia tree, Michaelmas daisies, the yellow double daffodil, the white lupin, the Virginia creeper, the Phlox, the spiderwort (termed Tradescantia), and the pineapple and apricot.

Hester Tradescant commissioned the tomb upon the death of her husband.  It is unquestionably quite original and individualistic. Apparently Samuel Pepys intended to obtain an engraving of it and drawings of the tomb are preserved among Pepys’ papers, which are held in the library of Magdalene College, Cambridge. Embellishments on the tomb such as oak trees, ruins, broken columns, a crocodile, shells, pyramids, a hydra and skull reflect the father and son’s interest in plants and rarities. Vice Admiral William Bligh, he of the mutiny on the Bounty, once a Lambeth resident, is also buried in the churchyard.

There is much speculation about John Tradescant the Elder’s personal history and why and how he became a gardener of repute. There is no record of his having served an apprenticeship as most recognised gardeners did at the time. We know that his first ‘break’ into the trade was with Robert Cecil, working at Hatfield House, and thereafter he worked for William Cecil, the second Earl, at Salisbury House in the Strand, London. For Edward, Lord Wotton, he worked at St Augustine’s Palace at Canterbury.  In 1623 he entered the service of George Villiers, first Duke of Buckingham, gardening at the Villiers family’s residences in Essex and Rutland. His final posting was at Oatlands Palace in Surrey, the home of Henrietta Maria, Charles I’s consort, as Keeper of his Majesty’s Gardens, Vines and Silkworms.

His son, John, took his place upon his death. He was better educated than his father, having had a classical education as a pupil at King’s School Canterbury. It is extremely likely that he would have acquired his horticultural skills – undertaken an informal apprenticeship – by working with his father.

Through their illustrious contacts, the Tradescants were able to take advantage of opportunities to accompany diplomatic, political and trade missions abroad, in order to obtain botanical specimens and curiosities. John the Elder enjoyed several voyages to the Low Countries and France, and later in his life one to Russia, and another to Algiers – this mission was to ‘quell the Barbary Pirates’.  John the Younger is particularly noted for his voyages to Virginia.

In 1988, the interior of the church was extensively transformed into an event venue and temporary and permanent exhibition centre. One feels rather elated while looking, wandering among arched columns, along pale stone walls, stepping over memorial tablets and bathing in light emanating from attractive stained-glass windows. But unfortunately space and financial resources are still limiting and at any one time the museum is able to display only a small proportion of objects from its collection of some 10,000 items – paintings, watercolours, photographs, tools, ephemera and historic artefacts – reflecting the history and culture of gardening and landscaping in Britain during the last 400 years.

I saw a temporary exhibition exploring the work of Dan Pearson, a present-day landscape and garden designer and columnist. His projects include landscaping for King’s Cross, the Millennium Dome with Sir Richard Rogers, and a mountainside ecological park in Japan. Other temporary exhibitions have focused on Japanese gardens, urban gardening and the gardener Beth Chatto, for example. Upstairs, on a mezzanine floor, are items from the permanent collection. The late 19th-century and early 20th-century tools are particularly intriguing: a spade with a foot bar, a combined trowel-rake, a two-handled long hoe, and for the ‘gentleman’ gardener, a walking stick with a spudder, one with a pruning saw and another with a ‘slasher’. All these are unlikely to have existed in the days of the Tradescants.

Although the estate of the Tradescants now lies beneath the foundations of south London houses, shops, warehouses, office blocks and roads, their green and fertile legacy thrives in the nation’s balcony window boxes, back gardens, parks and commons.  When my husband and I were just married the first bit of green we planted was the Virginia creeper. It never occurred to us that this was once considered an unusual and coveted discovery, a fertile treasure that wasn’t taken for granted.

For more information about the Garden Museum, please refer to http://www.gardenmuseum.org.uk/.

This article was first published in Cassone:  The International Online Magazine of Art and Art Books in the June 2014 issue.