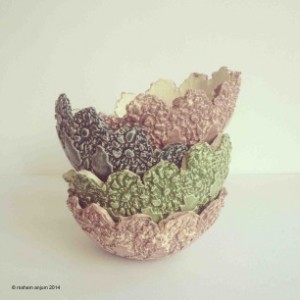 Recently I attended a talk at Hoare’s bank about a project it helps to fund that enables women potters in Sri Lanka to sell their wares to British retailers. Buyers include Jamie at Home (Jamie Oliver), David Mellor, Habitat, and the Cinnamon Club Indian restaurants. The bank allocates profits towards an associated trust (the Golden Bottle), which grants awards to artistic, educational and environmental ventures.

The speaker was Maham Anjum, a ceramist and former scholarship student of Central St Martins College of Art and Design, and the Royal College of Art (RCA).  She has been directing the project for nearly 11 years. Anjum was drawn to a career as a ceramist because she believes in the importance of art in the rhythm of the every day and its civilising effect. The rarefied fine art world does not offer this attraction. Indeed, before coming to Britain 18 years ago, Maham studied for a fine art degree in Karachi, where she grew up. Maham speaks from experience.

After the talk, Maham explained to me, ‘pottery has been made and used for thousands of years. It’s part of our heritage. We cook with pottery; we serve with pottery; we eat with pottery. Pottery is art, creating it is an art – aesthetically satisfying as well as functional’. Pottery doesn’t have to be purely ornamental, she emphasises. Clay, its primary material, is found all over the world; it can be used for a broad range of products. It’s big business, art for art’s sake, high tech, low tech.

For her MPhil at the RCA, Anjum envisioned a project reflecting her values, and so she developed the idea of working with artisanal potters, helping them to develop processes, techniques and designs that could be produced simply and marketed abroad. Through her educational and professional association with the design group Queensberry Hunt she established contact with women potters in the village of Rukmale (pronounced ‘rookmalay’) near Colombo, Sri Lanka. Queensberry Hunt has worked with porcelain factories in Sri Lanka for years and through them the firm had discovered craft potters. David Queensberry, Senior Fellow and former Professor of Ceramics at the RCA, was Anjam’s dissertation supervisor.

Maham was in like-minded company. The firm believes that the art of design, which ‘gives form and function to the products that we use has more impact on our lives than any other art’. Queensberry Hunt has undertaken projects for manufacturers such as Spode, Portmeirion, and Waterford Wedgewood Royal Doulton UK.

‘At first the women didn’t think we were serious,’ Anjum recalls. ‘They thought we were funny, peculiar. Why was this woman here? Their work was becoming increasingly difficult to sell locally; they couldn’t believe that people from faraway, so different from them, would find their wares attractive.’

Rukmale has a population of 3000–4000. Most of the women potters with whom Maham works are the family breadwinners. They are in their 40s, 50s and 60s. Mothers-in-law work with daughters-in-law. This helps to keep the skills in the family. (The nature of pottery-making differs from region to region.) Daughters are rarely part of the team, as they tend to move away from the home upon marriage. Daughters-in-law move into the area to join their husbands.

When Maham first contacted the women, almost instinctively they were making the same shapes they had known all their lives, never contemplating change or experiment. One afternoon, in the early days, when Maham was working with Matilda, a ‘master potter’ in her late 60s, she suggested to Matilda that ‘she change her pot ever so slightly, take in the wall of a piece. By doing so, we turned it into a tea light holder. When Matilda took it off the wheel she said, “oh, why didn’t I ever think of this”. I hugged her with joy. The other women in the room were shocked. The potters are the second-lowest caste, certainly not meant to be embraced by strangers, especially me’. 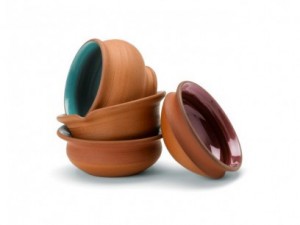 The products sold in Britain are all terracotta and glazed on the inside. Their shapes are based on traditional designs, which have been, in response to Maham’s inspiration, altered slightly to increase their appeal to British customers. Maham never intended to change the designs radically, merely enhance them. Respecting the sensibilities of the women with whom she works is vital to her.

The tea lights sell well. Their glazed inside helps to reflect the candle light. Some have a ring of tiny holes running around the outside, which further enhances the warmth of the light.  The traditional bowls for sweets have been altered slightly so they can stack and are marketed as bowls for nibbles, and unusual and useful gift packages that are easy to store.  Cooking and serving bowls in various sizes are also popular.

One design, the potato pot, is shaped on the potter’s wheel, then the bottom is shaped and rounded by being ‘beaten’ with a flat-based wooden tool against a knobbed stone anvil. The beating enables the clay-based material to expand and contract when placed over an open flame, making it less likely to crack. The potato pots are then fired at a low temperature, 850 C, by the women, in a wood kiln on site.

Clay is sourced locally from a nearby river. The local factory purifies the clay by filtering out foreign material such as debris and organic matter. During firing, impure clay can cause uneven glazed surfaces, cracking and swelling – ‘bloating’. The clay is stored until used in plastic bags.

The potters’ wheels are based in a communal area. They may be electric or foot operated – ‘kicked’. The women work for a few hours in the morning and in the afternoon. They determine collectively who will make what. This is how the women have always organised their trade. Once a week the wet ware and the fired potato pots are collected by the factory, some 200 kilometres away, and the wet ware is shelved until it is dry – greenware. The pottery (excluding the potato pots) is then fired in an electric industrial kiln at 1000 C – ‘biscuit fired’ – and afterwards checked for cracks. All the pottery is then glazed, i.e. a thin coating of a vitreous substance is sprayed all over the inside. This process adds colour or gloss and makes the pottery waterproof. The pottery is fired again at 1150 C. It may take three to four months for an order to be completed and boxed for shipping to the UK.

The factory pays the women for their work per piece. Before the project became a reality the women were paid 37 pence per pot, now they are paid £1.15 for each pot. Still, the local demand for their wares is drying up. Nowadays many Sri Lankans use steel and plastic utensils and cookware as they are regarded as signs of affluence. Terracotta pots might still be used for cooking and for traditional feasts, weddings and ceremonies, but on a limited scale. The potters need their foreign market.

Health and safety at work have improved immensely since the project began. The women now dust and sweep their working areas regularly. This reduces the chance of contracting silicosis from the dust, a hazard of pottery making. Backache and stiff limbs are less prevalent thanks to benches and tables; rarely do the women work while sitting on the ground as they used to.

Maham says, ‘the women have a new lease on life; I feel personally rewarded by their increased sense of self-esteem. It’s phenomenal. They’re amazed by the fact that their work is featured in magazines, newspapers and on the Internet’.

The potters have used their increased earnings in sensible ways. When Maham visits the women at home she notices that there is more fruit on the table, more furnishings and practical household appliances. Some of the potters have invested in a pineapple farm. One woman, Kanti, has bought a sewing machine, which her mother-in-law uses for making clothes for the local school children. Kanti also contributes to her daughter’s university fees.

Indeed, most of the younger women would rather go to university than become a potter. But perhaps with Maham Anjum as a role model some will see how being a potter can be rewarding in a productive professional and philanthropic context. Instead of studying to be a lawyer or an accountant they could study applied art, establish their own ceramics firms and create ‘pots of fortune’.

Beating a pot is a technique used extensively by potters in South and SE Asia, and Africa. It stretches and thins the original shape using an anvil and paddle. The shapes and methods of using these tools differ between regions. The process improves the resistance of the pots to thermal shock by causing the particles of clay (platelets) to divide into thin layers (laminate) and by causing the occurrence of subcritical cracks within the piece. These physical phenomena enable heat to be diffused – rather than ‘shock’ – when the pot rests on an open flame, effectively rendering the pot less likely to crack when exposed to fire.

The round-bottomed potato pot can be used for cooking on an open, gas hob (not electric or ceramic), baking and serving. Place the potatoes in their skins in the pot, cover and cook for about 30 minutes.  Shake the pot every 10 minutes. The cooked potatoes have a soft, creamy centre, a crisp skin and smoky flavour. You can use the pots for dry grilling; clean them with water and a soft brush. The potters clean them with ash.

The photographs of ornamental bowls by Maham Anjum and the Rukmale nibble bowls for Jamie at Home (handmade by the potters and designed by Maham Anjum), courtesy of Maham Anjum http://www.mahamanjum.co.uk/about/.

This article first appeared in Cassone: The International Online Arts Magazine of Art and Art Books in the July 2014 issue. The feature has also appeared in the C. Hoare and Co, Newsletter, July 2014, http://www.hoaresbank.co.uk/news/jenny-kingsley-article.