Decorators may be compared to doctors. It is useless to put yourself under their direction unless you mean to carry out their regime; if a patient takes an allopathic dose one day and a homeopathic dose the next, it is extremely unlikely that on the third day he feels any benefit from either.

(Rhoda and Agnes Garrett, Suggestions for House Decoration in Painting, Woodwork and Furniture, 1876) 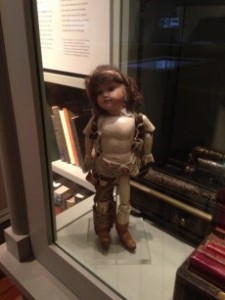 ‘Even for me it was an eye opener,’ said my friend Emma, an architectural historian and conservator. She was referring to the Elizabeth Garrett Anderson Gallery (EGA), near King’s Cross, London, which explores the world of the first Englishwoman to qualify as a doctor. ‘There I learned that Garrett’s sister Agnes (1845–1935) and cousin Rhoda (1841–82) were the first women to establish themselves as architectural decorators. I’d never come across them in my work. They’ve been hidden from history, despite their success.’

Many members of the doctor’s enterprising family were involved in the women’s suffrage movement and ensuring equal opportunities for women in education and art. The gallery has a wealth of explanatory panels, touch screens, photographs, memorabilia and architecture exploring the cultural, social and political life of Victorian Britain.

The gallery is part of what was the New Hospital for Women and later renamed the Elizabeth Garrett Anderson Hospital. John McKean Brydon (1840–1901), a relation of Skelton Anderson, Elizabeth’s husband, designed the hospital. (Brydon also designed the Victoria Art Gallery in Bath.)

Drawings of the building were exhibited at the Royal Academy. The building committee sought the advice of Florence Nightingale and Douglas Galton on hospital hygiene and sanitation. Good ventilation in the wards was deemed essential. The premise of the design was that the wards – ‘pavilions’ – should be detached on three sides, with windows on the longer sides facing each other, each pavilion on either side of a corridor. The hospital, opened in 1890, was the first purpose-built hospital devoted to the treatment of women by women doctors.

The Grade II listed hospital was built in the Queen Anne ‘revival’ style, with red bricks, and complementary cornices and quoins defining the edges of the blocks. The white-painted windows, set flush against the brickwork, were each divided into 12 small panes. Inside, behind them, was another set of windows with hoppers at the top and pairs of casements below to allow for adjustments in ventilation.

The interiors were intended to be aesthetically pleasing in an ideal middle-class domestic setting: bright, cheerful and homely, favouring strong intimations of the Art and Crafts movement. Agnes Garrett, the sister of Elizabeth Garrett Anderson (1836–1917), was chosen to enhance the interior.  The hospital managing committee warmed especially to her proposal, among several tenders received, that a dado of blue tiles should run along the corridors and staircases and decorative ‘Italian’ casts of women and children should be hung in the four large wards. Agnes also arranged for what Brydon referred to as ‘tasteful coverlets’ for the beds and screens, the material for both featuring a Morris or Liberty-type pattern, and for each patient to have an oak cupboard with integrated towel rail, bookshelf and wall light. In the wards were plants and stoves with open hearths, adorned with Delft-like tiles. The bathrooms had concrete floors and walls with varnished paint above cream glazed tiles.

The entrance hall, restored to its near-original state, is one of the two gallery areas. It is lined to a height of about five feet with dark-stained wood panelling, and wallpaper with a raised surface pattern above.  At the far end there’s an arched door case with a paned fanlight, situated a few steps above hall level, leading into the central block. Near the arched door case is a framed wood fireplace, inset with marble, Delft tiles and a round convex mirror. The fireplace stands at an angle across the wall between the doorway and the three-windowed alcove. In this bay once stood a statue of ‘opportunity’ by Henry Leifchild. The floor has black and white tiles in a pattern of diamonds and squares.

A handsome wooden door case leads into the other part of the gallery, once used as a library, meeting and reading room by the Association of Registered Medical Women (now the Medical Women’s Federation), founded in 1879. The chimneypiece, with geometric panelling, designed by Agnes, apparently complemented the style of the bookcases that once lined the room. On the wall hangs a recreation of the Garretts’ wallpaper, ‘Laburnum’. Also displayed are ceramic plaques, designed by Agnes, featuring the names of donors such as Henry Tate, which were hung in the hospital.

It is fortunate that some of Agnes’ work for the hospital is on view, as little concrete evidence of the contribution the Garretts made to the field of interior design survives. There are few personal papers shedding light on the nature of their commissions, sales and exhibitions.   Existing written references to their work by friends, family and clients give some insight.

They did decorative work for the London home and Sussex country house of the composer Hubert Parry. Furniture, such as a day-bed, bookcases, corner cupboard, footstools, armchairs, that the sisters designed for James and Margaret Beale’s London home, can be seen at Standen, the Beales’ former country house, now run by the National Trust.  The decorative work of the ceiling of the first floor back room of 2 Gower Street (once the Garretts’ home and offices), currently owned by the University of London, is attributed to the Garretts. The ceiling centre features a delicate pattern of flowers edged with portraits of poets.

Regarding the Garrett style, Elizabeth Crawford notes in her book Enterprising Women: The Garretts and Their Circle, that the Adam-style ceiling complemented the Inigo Jones, Wren and Sheraton-influenced furniture the Garretts designed. They favoured restrained, refined furniture designs, with characteristics such as velvet upholstery, square tapered legs, and mirrored backgrounds for cabinets reflecting ornaments and china on display, placed in uncluttered, unpretentious settings.  ‘Never go out of your way to make a thing or material look like what it is not. If a chimney piece or a pillar is made of wood do not paint it to imitate marble… If your doors are made of deal do not grain them to imitate maple,’ they advised. Their market was assuredly middle-class families with discriminating taste, who could not spend an indiscriminate fortune. The Garretts’ business was favourably compared to that of Morris and Co.

The Garretts’ achievement is especially notable given that Victorian middle-class women were expected to be a good wives and mothers, or at least accommodating spinsters, supported by family or earnings as a governess. Neither Rhoda and Agnes expected to marry. Rhoda was the daughter of a penniless vicar whose second wife did not welcome her presence. Agnes helped her father, a malster and brewer, manage his business interests. She enjoyed a comfortable middle-class home in Suffolk.  Perhaps what prompted the women to become architectural and interior designers was the desire to enter a business where there were no other women working. The trade could be deemed most appropriate for women.

Elizabeth Crawford quotes a revealing comment made in 1876 by Rhoda to an audience of the National Association for the Promotion of Social Science: ‘woman’s sphere and woman’s mission is one of the most important problems of the present day, but here, at least, in the decoration and beautifying of the house, no one will dispute their right to work. If women would rightly undertake this work and would study to understand the principles upon which all art – decorative art as well as the higher branches of art – is based, they would not only thereby increase their own source of happiness, but in thus extending the gracious influence of the home, they would help to raise the position of household art, and thus render a real service to the nation’.

Agnes has commented upon ‘the necessity of a thorough and systematic training in any work which [women] intend to do’. Unfortunately, it took several years before Agnes and Rhoda were able to secure apprenticeships.

The Garretts first worked with the furniture maker, mural decorator, stained glass and tile designer Daniel Cottier and afterwards with Brydon. From the mid 1870s they lived and worked at 2 Gower Street in Bloomsbury. In 1879 they opened a warehouse nearby for housing the furniture, carpets, wallpaper and textiles they created.

In 1876 the Garretts co-wrote Suggestions for House Decoration in Painting, Woodwork and Furniture, the second volume of the 12-volume Art at Home series published by Macmillan and edited by the Reverend W.J. Loftie. Six editions were published in Britain, and one in America. In 1878 furniture and interior designs by the Garretts were exhibited in at the Universal Exhibition in Paris. In 1888, Agnes exhibited an interior setting with carpets, furniture, metalwork, wallpaper and woodwork with the Arts and Crafts Exhibition Society. Rhoda served on the committee for the Society for the Preservation of Ancient Buildings.

Perhaps architectural design is natural medicine for the soul? An enlightening experience awaits.

Please refer to http://www.egaforwomen.org.uk/gallery.html. for information about opening hours.

The photograph is of a doll with spinal brace and leg splint used for teaching by the first British orthopaedic surgeon, Maud Forester Brown, 1930s, at the EGA gallery.