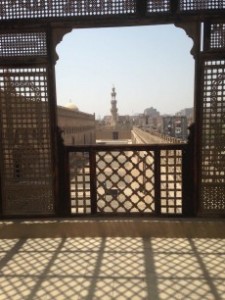 Recently, we went to Cairo for a long weekend to visit our son, Patrick, who was working there as a journalist for a British newspaper. When I was growing up in New York, the Middle East seemed like alien territory, mythical, unreachable. The only personal link I had with the area was through friendship with a neighbouring Israeli family. In those days, people went to the Caribbean for a holiday; they did not go to the Valley of the Kings.

In Cairo, we stayed in a hotel that did not feel like a hotel, but more like a guesthouse; this made the new world seem less distant.   Hotel Longchamps occupies two floors in a six-storey apartment block.  The half German and half Egyptian owner, Mrs Bakri, is the quintessence of efficiency and the art of warm welcome. During breakfast, I imagined Lawrence Durrell sitting at the next table, eating his boiled eggs. (For a while the author worked in Cairo as a public information officer for the British embassy.)

The hotel is in Zamelek, an island in the Nile across from central Cairo – a ‘smart’ residential enclave, where wealthy Egyptians live in modern flats or apartments in 19th century villas. Many embassies are sited here. Nonetheless, as throughout Cairo, one passes half built, crumbling blocks sited between decaying belle époque mansions with baroque, neoclassical and art deco architectural elements.

We quickly realized that by boldly weaving one’s way through cars and motorcycles, we could cross the streets easily, and this became second nature. Indeed, it is easier to walk through the roads than along the pavements, many of which are chipped, potholed and crumbling. 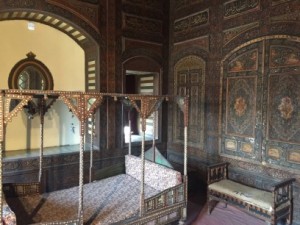 One of the most illuminating stops was the Gayer-Anderson Museum, where, incidentally, part of the James Bond movie The Spy Who Loved Me was filmed. The museum was once the home of its namesake, the British Army officer and doctor Major Robert Grenville (‘John’) Gayer-Anderson (1881–1945), who was fascinated by the Arab way of life and, in particular, Egypt, his ‘adopted land’. After qualifying as a doctor in 1903, Gayer-Anderson was commissioned into the Royal Army Medical Corps and, in 1906, seconded to the Egyptian army. In 1923–24, he served as the Oriental Secretary to the High Commissioner, Lord Allenby, after which he retired from the army. It was probably in 1935 that King Farouk granted Gayer-Anderson the honorific title of Pasha (akin to a high-ranking civil or military officer) and permission to reside at Bayt al-Kretliya, the present day Museum. When Gayer-Anderson returned to Britain in 1942 because of ill health, he bequeathed – or one could say returned – Bayt al-Kretliya, to the Egyptian nation.

The house comprises 16th century and 17th century buildings linked by a bridge-like passageway.  Displays of antiquities, English, Oriental and Middle Eastern artistry and craftsmanship, including furniture, glass, textiles, weaponry, smoking pipes, utensils, ethno-medical equipment, such as birthing chairs, feature in the rooms, most of which are arranged and decorated as they could have been in Gayer-Anderson’s time. He collected the objects during his travels. In the library, there is a drawing of him with a sphinx-like head.

The interior design of the house is typical of Egyptian houses of the prosperous, being a ‘response’ to the country’s cultural and climatic conditions. The airy, spacious rooms are inward looking, arranged around a central hall-like room. Other houses’ rooms may be arranged around a courtyard with fountains and arcades. Typically, the windows are small, many covered with mashrabiya (wooden lattice screens), which enable the women of the house to observe without being seen, and air and cool breezes to gently flow through. Internal mashrabiya, enclosing a balcony, also enable women to observe menfolk, unseen. There are rooms that once would have been solely for the use of women, to put on makeup, dress and converse amongst themselves. Many of the ceilings and doors are decorated with gilded, colourful, intricate geometric and floral designs, bounded with strips of wood.

The house abuts the Ibn Tulun Mosque. Ibn Tulun, the son of a Turkish slave, founded the Tulunid dynasty (868–905 AD). He was sent to Egypt to govern on behalf of the Abbasids of Baghdad. This breath-taking brick and plaster mosque (built 876–79 AD), quite staggering for its size (it covers some six acres), simplicity, and potent air of peacefulness, features a minaret with a staircase spiralling around its outside (rather than typically in the interior). Climbing to the top reveals a panoramic view of the city and the mosque’s courtyard with an enclosed ablutions fountain, arcades, and surrounding crenellated walls.

One finds the tourists at the Egyptian Museum, a massive salmon pink Neo-Classical edifice. The Museum, hailed for its collection of over 120,000 treasures reflecting ancient Egyptian history, is poorly lit; the panels are not as informative as they could be; most lack any sense of narrative. It is like a warehouse of ill-revered and randomly displayed objects.  The famed highlights are the Tutankhamen Galleries, the jewellery rooms and the Royal Mummies. We soothed our disappointment by winding our way through souks, past the tentmakers and spice stalls, to ride along the Nile, on a broad sailed felluca – with the bright orange sun setting in the background, the stuff of old fashioned romantic films. 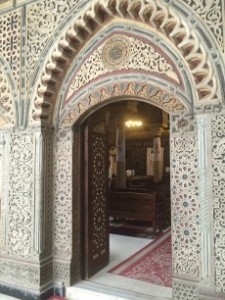 In what is referred to as Coptic Cairo are a cluster of religious establishments, many of which are elaborately adorned with gilded icons and geometric and floral patterns and intricately carved wooden panelling and screens.  In particular there is The Hanging Church, so called because it is suspended over the gate of a Roman fortress and distinguished for its wooden roof in the shape of Noah’s Ark and pulpit resting on 15 slender columns. The Church of Saints Sergius and Bacchus is where the Holy Family supposedly rested during their flight into Egypt. The Ben Ezra Synagogue, originally a church, was sold to the Jews in AD 882 in order to pay the annual taxes imposed by the Muslim rulers at the time.

The Coptic Museum has an extensive collection of Christian and especially Coptic antiquities, which are clearly displayed and identified.  The Muslim invaders after AD 641 called the Christians ‘Coptic’  and later used the term for the monophysite church, which has a slightly different theological perspective of Jesus Christ from that of the other Christian churches. The Copts place great emphasis on the divine nature of Christ, as opposed to His human incarnation.

We arranged to visit the pyramids on the outskirts of Cairo with a guide. Our guide was an extremely informative and charming man. There were no visitors other than at Giza.  When we were at Saqqara to see the ‘Red’, ‘Step’ and ‘Bent’ pyramids, we felt as if we were floating on warm air, atoms among the sands, infused with a sense of slightly surreal silence.

There are roughly 100 pyramids in Egypt, dating from the Old Kingdom to the Middle Kingdom. The massive pyramid-shaped tombs are devoted to the pharaohs or their consorts. They were probably constructed mostly by farmers, rather than slaves, during the flood season, when the Nile covered the fields, and thus materials could be transported through the waters of the river. Ropes, pulleys and levers helped to lift and lower the stone blocks into place. The pyramids used to be encased in white limestone, but little of this remains. For centuries Cairene builders stripped them of the limestone to use for buildings in Cairo. Exploring some of the tombs entails steep climbs and ascents and stooping underneath low ceilings, and can be claustrophobic, but once inside one can appreciate the pyramids’ enormous bulk and precise design.

I am embarrassed to admit that we were apprehensive about visiting Cairo because of the political situation. Once there we didn’t feel as if we were in a region of conflict. We encountered so much kindness. We are indebted to Patrick for the opportunity to step into an unfamiliar region, appreciate it visually and artistically, understand why the people do what they do, what they treasure, what they fear, what makes them hope and despair. Understanding breeds sympathy and helps to prevent wars; but I’m not so sure that this is as obvious as people assume.

Visit Casual Cairo Detours for reasonably priced and personally tailored tours. The owner is very helpful, pleasant and just ever so slightly self-deprecating.  The Kingsley’s stayed at the Hotel Longchamps; there are also the usual luxury hotel chains in Cairo. For practical information about the Gayer-Anderson Museum, visit www.sca-egypt.org. In the Fitzwilliam Museum in Cambridge one can see Egyptian antiquities collected by Gayer-Anderson, which he presented to the Museum in 1943 (in all some 7500). So far, nationals from the UK, EU and USA (and certain other countries) may obtain a Visa upon arrival ($US), but this is subject to change; one should verify Visa requirements well before departure. Details from the Egyptian consulate.

This article first appeared in Cassone: The International Online Magazine of Art and Art Books in the July 2015 issue.