I have an obligation to the people who have given me permission not to simplify the material in the service of some personal ideology which they may not share. And I take that very seriously, because when someone has confidence enough in me to let me hang around – either the person that’s in charge of the place or the person who’s involved in a particular sequence – I feel an obligation to treat them fairly however subjective that term may be. 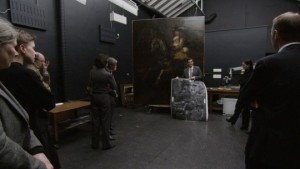 For over 40 years, Frederick Wiseman has been making documentaries about institutions and places. His filmography includes films about a boxing gym in Texas, an Idahoan state legislature, a high school in Philadelphia, the Paris Opera Ballet, a small town in Maine and a hospital for the criminally insane.  The National Gallery, his latest achievement, is about the gallery that sprawls majestically along the north terrace of Trafalgar Square.

Its origins date back to an early 19th century campaign to establish an art collection for the ‘enjoyment and education of all’.  The first paintings in the collection were works by Italian, Dutch, Flemish and British artists.  Private donations and Trustees’ acquisitions expanded the collection. The first part of the building, the home for the collection, opened in 1838. It has been extended over the years. The site was chosen because ‘it could be reached by the rich driving in their carriages from the west of London, and on foot by the poor from the East End.’

The gallery now houses some 2,300 works of European art dating from the 13th–20th centuries. The exception is Men in the Docks by the American artist George Bellows, which was acquired in 2014 to mark the beginning of an American collection.

Annually the gallery now attracts some six million visitors; it is the fourth most visited museum in the world. It is a non-governmental body, with charitable status.  The gallery is meant to maintain and enhance the collection, in the interests of the present and posterity, and provide opportunities for all age groups, the socially excluded, the privileged, the uninformed, the visual arts specialist and those with special needs to appreciate the paintings. Admission should be free, and opening hours should be extensive. (The gallery does charge for special exhibitions.)  The gallery arguably has a duty to dilute lingering auras of omnipotence and strive to be welcoming rather than intimidating.

Wiseman filmed over a period of three months in 2012. His three-hour achievement, edited from 170 hours of footage, reveals how the gallery imaginatively and earnestly captures and sustains the interest of its visitors. We witness life in the gallery, and a glimpse of it outside. One scene shows a line of people, well wrapped up, damp and shivering in the cold and rain, waiting to attend the exhibition Leonardo Da Vinci: Painter at the Court of Milan. Other frames reveal Greenpeace activists scaling the roof and unfurling a banner saying ‘It’s no oil painting, save the Arctic’ in protest against a sponsor’s drilling. (The culprit was Shell.)

There is no voiceover, no narration, no soundtrack, no diagrams, no tables, no captions, no graphics, and no interviews between the filmmakers and the ‘stars’; the scenes, some lengthy, some pithy, appear seamless, though they are not in chronological order. Yet, the film does not appear disjointed; a sense of coherence flows throughout.

As a filmmaker, Wiseman says that he does not wish to be didactic, but we learn a lot from what we see and hear in the studios, classrooms, galleries and meeting rooms. People appear to be unaware of the fact that they are being filmed, as if the filmmakers are invisible.

We look at great art from both afar and close up. We watch restorers chiselling and gilding frames. Conservator Larry Keith holds up X-ray imagery of Rembrandt’s Portrait of Frederick Rihel on Horseback, which reveals a man standing in a landscape 90 degrees anti-clockwise beneath the finished painting. Using a recycled canvas for a commissioned portrait is an unusual undertaking by Rembrandt, although he did re-use canvases for self-portraits. We see a man varnishing another work by Rembrandt with sweeping broad strokes. All retouching, we learn, is done on top of a varnished surface. If the next generation of restorers disagrees with the accuracy of the restoration, all can be washed off easily.

A docent discusses the puzzling placing and meaning of the elongated skull at the foot of Holbein’s The Ambassadors. A colleague explains how Rubens’ depiction of light, including the flickering of a candle, in Samson and Delilah, reflected the nature of the sunlight and breeze coming through the room in which the painting was to be placed.

Blind and partially sighted people navigate with their hands a reproduction of a painting by Pissarro printed in relief, while an enthusiastic docent talks about the picture’s painterly elements. In another setting, a curator encourages staff to try various ways of hanging and lighting a picture. Janitors polish the floors in the galleries with whirring machines. A staff meeting discusses looming budgetary restraints; there’s a £1 million gap to fill. No, they are not bickering: a sense of integrity pervades in the interests of finding ways to stay true to the raison d’être of the Gallery.

The visual and the performing arts are infused with each other to enhance the experience of viewing. In response to Titian’s work, a pas de deux, choreographed by Wayne McGregor  is performed, with music by William Byrd, in front of Diana and Actaeon; Jo Shapcott reads her poem Callisto’s Song; there’s a piano recital of a Beethoven sonata.

Visitors and staff are of all shapes and sizes, with broadly differing accents and ways of dress; no one exudes a blue stocking image. The cult of the ivory tower does not appear to play a role in the gallery’s endeavours, though one cannot help but sense that Nicholas Penny, the director at the time, would like to occupy a small room at the top, especially when he is talking about Poussin’s Triumph of Pan to supporters. Penny, a distinguished scholar and curator, appears apprehensive and wary of appeasing populist expectations. (But does one have to be simplistic in order to simplify? Surely not.)

In an interview with Thomas Marks, Editor of Apollo magazine, in December 2014, Penny said that:

People talk all the time about how it’s really important to get more young people in, which is perfectly good, but I really think it’s more important that people in my position should be thinking about what’s going to happen in 30 years’ time. If you do that, you’re keener to look after – and I don’t just mean protect, but actually research and think about – all the most unpopular art that happens to be in the National Gallery today.

For Penny this means respecting the less fashionable Old Masters as well as the great tourist attractions.

Wiseman does not and cannot show everything. But he is trustworthy. He reveals the essence of the breadth and depth of life inside the gallery.  We are not missing a shot. But, as Wiseman says in an interview with Rich Juzwiak, published on the Gawker weblog (11.08.2013):

It’s obviously impossible to be objective. It’s a non-argument because every aspect of making a movie represents a choice…But what I have to do in order to use a sequence is initially identify what’s going on among the participants in general, in the sequence. And then I have to be sure, once I have identified that, that the part that I use doesn’t distort my understanding of what’s going on. Because you can edit something, edit almost any sequence, and make a fool of somebody, for example. But when they make a fool of themselves, I don’t want to twist the sequence, or twist it in the way I edit it, to make fools of them. Ultimately I’ll make a fool of myself by doing that.

Wiseman’s masterpiece will not please everyone. A few people in the London cinema where I saw the film left before the end. Such is the risk that great art takes, as we see so clearly in the Wiseman’s film.

Frederick Wiseman was born in Boston, Massachusetts, in 1930. He studied for a BA at Williams College, in Williamstown, Massachusetts, Afterwards, he studied law at Yale University; he completed his LLB in 1954.  After serving in the US Army, Wiseman taught and practised law. In 1964, he produced The Cool World, a semi-documentary adapted from a novel by Warren Miller about life in the slums of Harlem. In 1967, Wiseman completed his first major film, Titicut Follies, a disturbing portrayal of the brutality of life inside a public hospital for the criminally insane. The film caused great controversy and was banned from general release for 24 years. Wiseman has also directed theatrical productions in both America and France, as well as many documentaries. He has won numerous awards for his achievements.

The image reveals visitors to the gallery being shown a painting by Rembrandt, Portrait of Frederick Rihel on Horseback, and the x-ray image of the painting.

The DVD of The National Gallery by Frederick Wiseman is currently available.

This article first appeared in Cassone: The International Magazine of Art and Art Books in the March 2015 issue.