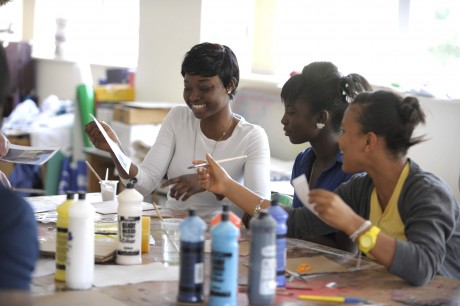 One day in 1986, when Abraham Daniel was nine, friends dared him to climb out onto scaffolding at school. He accepted the challenge – how ‘uncool’ he’d seem otherwise. But once on top of the world, Daniel panicked, slipped, fell three stories and splintered his spine. He lay in a coma for a month, and when he awoke he discovered that he was a paraplegic for life, or so the doctors believed. Fortunately, the diagnosis confounded itself a few years later, after Abraham had joined Harlem Hospital’s Horizon Art Studio.

When Abraham first arrived at the Studio, his muscles shook so badly that he could barely hold a brush. Eventually he learned to control his arms so that he could paint from his wheelchair. Then one day, artist Bill Richards who was at that time the Studio’s director, set the canvas higher than Abraham could conceivably reach. ‘I told him that if he wanted to finish the picture, he had to get up. He stood up, painted in the top and walked to the bathroom,’ Richards recalls.

The painting is known as Abraham’s Liberation. Abraham portrays himself as Superman extending an arm to protect his mother, who is dressed in yellow and is standing in front of a rainbow. Abraham is probably protecting his mother from his tragedy. The Harlem Hospital Center purchased the picture for its paediatrics wing.

Admittedly, in Abraham Daniel’s case, there was the possibility of ambulation, but physical and occupational therapy were not sufficient means of ‘enabling’ him to stand. Art pushed him to fresh heights. Daniel now walks without support.

Richards himself was a likely inspiration. His work features in the permanent collections of the Guggenheim, Brooklyn and Philadelphia museums. Before joining Harlem Horizon he had run art programmes in both a prison and a detention centre. To this day, perhaps as a legacy from Richards, the Studio provides an afternoon arts programme with watercolour, sketching and collage for in- and outpatients, aged between five years old and the early 20s.

What is particularly notable about the Studio is that it involves pupils who are not only injured but also from low-income homes in New York’s Harlem, where violence and criminality are features of everyday life. One hospital employee has remarked: ‘kids go from being damaged and heading in bad directions to openness and light’. Indeed, Abraham Daniel is now the Studio’s Assistant Director; another former student, Orville Anderson, is the Director.

Rather than being a barrier to creative expression, debilitation, Richards explains, could be a catalyst for enabling creative ‘breakthrough’. The shock of not being capable, at least temporarily, of leading a normal, healthy life can be transforming. Feeling trapped by the tragedy of their condition, people are more willing to take risks – ‘try anything’ – maybe something they never imagined, and refused to imagine, they could do, such as paint a picture. ‘Necessity is a powerful ally,’ says Richards, ‘since it assists in circumventing the usual process of learning how to paint; it takes you pretty much to direct expression.’ And once people are hooked, they continue their artistic journey.

Richards’ programme, in common with the others mentioned below, has never aimed at delivering art therapy – timed sessions of specific, schematic projects in a characteristically hospital-style setting. Richards’ artists determine the nature of their own brand of creativity; they’re in the driver’s seat. They learn about technique ‘on the job’. Unquestionably, hospitalization and hospice and home care are situations of dependency. But by virtue of the task in hand, artists have to act independently, make decisions, and self-motivate.

Moreover, because disablement restricts opportunities for socializing, many disabled people feel as if they’re living on the margins of society. Equally, poverty, lack of education and age (i.e. being much too young or too old) limit contact. Sufferers of dementia may feel and appear as if they are living in an impenetrable drained fish tank, the glass being as tough as steel; the body can stretch, but the brain cannot. Visual, arts-related activity often inspires them to ‘come alive’ – encouraging emotional responses, intellectual enquiry, memory recall and retention.

Another impressive lifeline, in Britain, is ‘Good Times: Art for Older People at the Dulwich Picture Gallery (DPG)’. The stalwart dedication of the founder, Gillian Wolfe, Director of Learning and Public Affairs, and that of her colleagues, verges on the zealous! As Wolfe says, they do what they do ‘for the love of it’. Gillian has been awarded both a CBE and an MBE for her services to arts education.

‘Good Times’ has been running for over five years. It provides friendship and stimulus to ‘older’ people who feel isolated because of age or disablement. Some suffer from dementia. The programme actively involves carers – family, community volunteers, nurses and staff members from the over 70 partnership agencies with which the Gallery works. Carers need care! They also feel isolated and depressed at times because of the burdensome responsibility and lonely circumstances of caring.

The programme offers art appreciation talks and workshops in glass painting, sketching, printmaking, felt, clay and collage, for example – at local libraries, parks, community centres, care homes, the Gallery, and local schools (to foster intergenerational understanding). There are tailor-made activities for elderly men who often feel more uncomfortable than women do about socialising.

Apart from ‘Good Times’, DPG offers other ‘art and well-being’ projects. The initiative ‘Prescription for Art’ encourages GPs to refer ‘depressed’ patients – to prescribe workshops rather than anti-depressants. Work with hospitals has included a project with the Intermediate Care Unit at Dulwich Hospital. Each participant painted images on a silk square. (Being a light material, silk can be imprinted easily with a large brush so good eye and hand coordination is not essential for users.) The squares were joined together by the workshop leader to create one large square for permanent display. There are projects with ‘vulnerable kids’ on public housing estates and young offenders serving custodial sentences, targeting those likely to experience minor mental health problems.

The gallery tries to engage people who might feel alienated by the artistic realm, perceiving it as an intellectual kingdom for the well-off elite. It offers free entrance passes to participants so that they can visit the Gallery in their own time.

Elsewhere in the UK and the US there are similar initiatives making the most of the visual arts to help improve the health of people of all ages. New York’s Museum of Modern Art, London’s National Portrait Gallery and Nottingham’s City Arts Charity are noteworthy references.

There is a well-established movement encouraging modes of interior design as a means of promoting healing and a sense of well-being. Private rooms, abundant light and noise reducing materials reputedly help decrease the number of patient (and staff) falls and infections, resulting in shorter hospital stays, fewer prescriptions for pain killers and lower discharge costs. Hospital Arts, a charity established by the Chelsea and Westminster Hospital, collects art for public and ward display in the Hospital, believing that patients, staff and visitors experience a sense of well-being by enjoying the work on the white washed walls. The displays do make you feel as if you are in a minimalist modern art gallery!

One exhibition, undoubtedly worth its weight on the wall, took place at the Wellcome Collection in London in 2009. It featured 158 watercolours by the performance artist Bobby Baker, illustrating her years of struggling with mental illness (‘borderline personality disorder’) while coping with work and family life. For Baker, the opus – a visual diary – was a means of survival, a self-administered remedy. Witty, insightful, poignant, brutal, candid, colourful, sad, the pictures make you laugh and cry at the same time. Baker brings the inside out and isn’t afraid to poke fun at the sometimes clinical insanity of the mental health industry.

It is unlikely that the search for innovative ways to cope with physical and mental debilitation can ever cease. There are now about seven million disabled people in the UK; most of us will be disabled to some extent before we die. About 25% of Britain’s present population will be affected by mental health problems at some point in their lives; the World Health Organisation estimates that by 2025 mental illness and heart disease will be the two most debilitating conditions worldwide.

The Oxford Institute for Ageing points out that more people in Britain are over 60 years old than under 18. People over 65 are estimated to spend an average of 80 per cent of their time at home. In 2010, nearly 300,000 older people did not speak to any friends or neighbours for a full month. Undoubtedly loneliness and inactivity lead to mental and physical decline regardless of age.

Regrettably, during recessionary times, funding for the arts, even when associated with health care, is a soft target for cuts. Fortunately, an increasing number of ‘scientific’ studies are proving how arts programmes in healthcare settings can strengthen and supplant the efficacy of conventional medical treatment. Nonetheless, prescriptions for art remain in short supply.

This article first appeared in Cassone: The International Online Magazine of Art and Arts Books in the July 2011 issue.