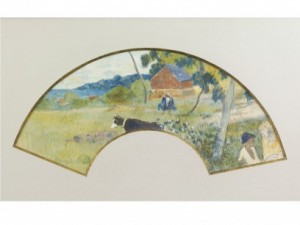 On the day that the London Marathon 2011 took place, I went to visit The Fan Museum in Greenwich, in the east of London. The route of the race passed near the Museum so I could share the sense of excitement that filled the air, and like many women – and men – I made a pleated fan out of the programme route to cool myself down. It was an unusually hot and sunny April Sunday.

The runners and spectators were definitely missing out on something very special. Set within a pretty row of Georgian buildings, this small and independent Museum comprises two adjoining houses dated 1721, meticulously restored and furnished to resemble an archetypal Georgian family home. There is a garden at the back with well-kept fertile beds, attractively laid paving, a pond and a fan-shaped parterre.

Most appealing of all are the fans, fan leaves and related fan artefacts that form part of the permanent collection belonging to the Museum’s founder, Director and Curator, Hélène Alexander. The descriptive panels are helpful and well written. Some include information about fan-making materials and construction. As well as the permanent exhibition, there is always a temporary, themed exhibition – ‘musical’, ‘theatrical’, ‘animal’, ‘American’, for example.

The Museum’s large windows are glazed with an ultra violet filter and the interior lighting is generous, so one can see the craftsmanship in minute detail without there being the risk that the sunlight will cause the works of art to fade. Many of the display cabinets are mirrored, allowing visitors to appreciate both sides of the fan.

The founder, Hélène Alexander, was born in Alexandria to a large family, many of whom were collectors. Her father, Victor Adda, was a notable collector of coins, a numismatist. He inspired his daughter’s interest in art history and love of beautiful objects. When Hélène was studying art history in the 1950s, she realised that fans were not only costume accessories but also works of art. She started to collect fans from junk shops and street markets. At that time one could find an eighteenth-century fan selling ‘for a song’.  Hélène took great pleasure researching the origin of her discoveries. Fortunately,she did not wish to keep her treasures just for her family and friends to admire; she resolved to find a permanent public space for their display – hence the establishment of the Museum in 1991.

In Britain – and in some other Western European cultures – the fan has been a commemorative souvenir, means of advertising, regarded as female coquettish frippery, and also as an essential accoutrement for the middle and upper echelons of society. Even when they lost their fashionable appeal, fans were still seen at royal occasions up until the mid 20th century. Today, fans are collectors’ items throughout the world, valued for their artistry and what they reveal about social and cultural history: the images tell stories. In the East, where they have never been merely a passing fashion, fans still play a ceremonial role and are symbolic of certain values. My husband and I were each given a folding paper fan by the family with whom my son recently stayed in Japan – as a symbol of friendship and good will.

Since the dawn of history the fan has played a symbolic and useful role. M.A. Flory, writing in 1895, in A Book About Fans, refers to Egyptian frescoes revealing Rameses the Great and his sons being fanned by a semicircular screen attached to a staff. The fan bearer is thought to have been of royal birth and inducted into service with great ceremony. Two fans of ostrich feathers were found in Tutankhamen’s tomb. Greek amphorae show women holding leaves arranged in a triangular form. Tombstones reveal Roman women holding fans. Flory notes the mention of fans as a means of cooling moist brows in Japanese and Chinese legends, and as ‘dignified’ by their use by deities in the Hindu heaven in Sanskrit poetry. A tool used for winnowing is referred to as a fan in the King James Bible in Matthew iii.12. It is believed that the early Christian church relied on the flabellum – a fan used in Christian ceremonies – to cool priests in the heat and to deter flies from the Eucharistic bread and wine.

Hélène Alexander suggests that illuminated manuscripts indicate that the fan was adopted in Europe during the 13th or 14th centuries as a charming fashion. It may have been brought from South America as part the Conquistadores’ bounty.

In some of her portraits Queen Elizabeth I carries a feather fan; indeed fans were regarded as acceptable gifts to royalty. By the late 16th century the bourgeoisie used fans, as well as royalty and the aristocracy; and folding fans appeared, perhaps encouraged by trade with China and Japan where, since the 12th century, the folding fan was already in use. Up until this time, fans had been fixed: bunched feathers or a rigid frame of straw, reed, vellum, bamboo or palm leaves attached to a handle.

One ‘new’ type that has been introduced is the pleated fan, a shaped leaf (or ‘mount’) placed over sticks. The outer sticks or guards are thicker, wider and usually more elaborately decorated. The sticks are held together at the base, by a rod or ‘pivot’, secured with a stop or ‘rivet’ enabling articulation.  The brisé fan, another sort, consists of sticks only, linked by a cord or ribbon. The third type is the cockade. This opens out into a complete circle and may be pleated or brisé. It is usually held with two handles.

Alas, it was the French fan that was usually regarded as ‘the’ fan to have, although many made elsewhere were just as fine.  Incidentally, America became one of France’s most important fan markets. At the end of the 17th century the Huguenots brought their skills to England and encouraged the establishment, in 1709, of the Worshipful Company of Fan Makers, which still exists today. Fans were also imported from the East.

Throughout their history, fans have been adorned with a rich variety of materials, images and shapes. They may have feathers, be black or brightly coloured, small or quite large, circular or shaped, or consist of a few single plumes set in a handle. Sticks may be made from wood, ivory, horn, tortoiseshell, mother of pearl or abalone, with plain, carved, piquéd or pierced surfaces; the guards could be studded with pearls, jewels, perhaps jade, and possibly silvered or gilded.  The leaves could be made from cured animal skins (‘parchment’), silk, fine gauze, cotton, linen, lace or paper.

Images may be simple adornments of flowers and birds, or mythological, Biblical, historical and every day life scenes, and include portraits and medallions. Landscaped gardens and pastoral scenes are popular. Some leaves reveal commemorative scenes, such as royal weddings and coronations. Poetry, maps and other aides-mémoires are also features. Leaves may be painted with watercolour, gouache or oil paints, or may be printed. The reverse is usually not the same as the front.

Although most great master painters did not pursue fan leaf painting, Degas, Gauguin and Toulouse-Lautrec did paint leaves for the sake of artistic experiment, perhaps as gifts. In the Museum there is a fan painted in gouache by Walter Sickert for one of his pupils. It shows Little Dot Hetherington on stage at the Old Bedford Theatre pointing to the spotlight while singing ‘The boy that I love is up in the gallery’.  In memory of her husband, Hélène Alexander was given a leaf painted by Paul Gauguin of a Landscape in the Martinique.

In the late 19th century the art of making and decorating fans became popular among genteel young ladies. Fan collections were being formed; antique collections were prized. But by the beginning of the First World War fans were no longer a part of every day living. They became increasingly the preserve of advertising – popular handouts from trades such as underwear, alcohol, hotels and restaurants.

Some people ask whether there is a language of the fan. Nancy Armstrong, author of Fans – A Collector’s Guide,  explains that it is an ‘art’ supposedly created by a Spaniard called Fenella. He published 50 directions for fan ‘conversation’ that were later translated into English by one of the most famous French fan-making firms, the House of Duvelleroy. But as fan authorities concur, the signs were forms of amusement.

So, for example, if I wish to say ‘Kiss me,’ to the man who has won my heart, I press the handle of the fan to my lips; and if I am in the midst of an illicit liaison and have cause to warn him that we are being watched, I twirl the fan in my left hand. The fan saves my breath for the kisses!

After I leave the Museum and wander through Greenwich Park, I wonder if, as part of a varied collection, any other fashion reveals as much about social and cultural history throughout the world as the fan? For the sake of the record and sentiment, I decide to keep my crumpled, pleated Marathon fan with my notes.

Brisé: a folding fan with sticks and guards only, held together by cord or ribbon.
Cockade: brisé or pleated fan, opening up to form a circle or semi circle.
Fontage:  a fan with guardsticks shorter than the leaf at its apex.
Gorge: the part above the pivot end and beneath the leaf.
Gouache:opaque watercolour paint thickened with gum, also called body colour.
Guards: the two outer sticks of the fan, usually wider, stouter and more highly decorated than the sticks in between.
Head:the base end of the fan.
Leaf or Mount: the part of the fan, single or double, placed onto and over the ribs.
Loop: a curved attachment to the head of the fan, held in place by the rivet, so that the fan can be suspended by a cord or ribbon.
Monture: the part of the fan comprising the sticks and guards – the ‘bare bones’.
Parchment: animal skin, such as that of calf, goat or sheep, prepared to provide a flat surface for writing or painting.
Piqué: decorative shapes made with dots of gold or silver set into the host material.
Pivot: a tiny rod inserted through the lower part of the sticks and guards around which the fan revolves. A stop at either end holds the fan in place.
Ribs: the upper part of the sticks supporting the leaf.
Rivet: the stop at either end of the pivot securing the sticks.
Skin: leaf made from unspecified animal source.
Sticks: the principle structure of the fan containing the articulation.
Vellum: prepared calfskin.

For more information about The Fan Museum regarding opening hours, facilities and workshops, please visit http://www.thefanmuseum.org.uk.

Photograph of a fan designed by Paul Gauguin, Landscape in Martinique, signed and dated Gauguin, 1887, courtesy of The Fan Museum.

This article first appeared in Cassone: The International Online Magazine of Art and Art Books in the July 2011 issue.