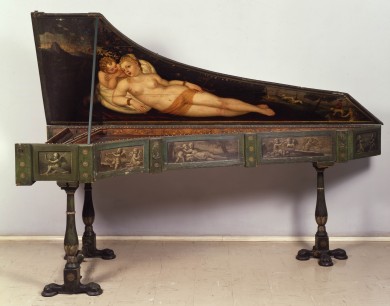 When I was growing up in New York I learned to play the piano on a baby grand Steinway. The piano stood in the drawing room of our apartment overlooking Central Park. It was indeed quite handsome. Its case was tawny coloured, with soft hints of grain. Walnut? The square legs were tapered, with castors at the end. The music desk, piano lyre (where the pedals are positioned) and lid were simple geometric shapes. On top we placed framed family pictures and a potted fig tree. When my parents had dinner parties they would remove these adornments, raise the lid and my mother or one of their guests would play and everyone would sing Broadway hits. George Gershwin’s ‘Summertime’ was a great favourite, but songs from Gypsy topped the list.

Furniture of sweet sounds, musical hearth and work of art, such was the piano. Years later, my sensitivity to the fact that keyboard instruments, particularly period ones, are works of art as well as musical joys, was stirred when, just married, we lived next to a couple who owned seven keyboard instruments; each one seemed the essence of the rooms in which they lived. Christopher Kite was Professor of Harpsichord and Fortepiano  at the Guildhall School of Music and Drama. Through the walls and over the garden fence, music floated through the air.

The Kites owned a very pretty reproduction harpsichord, cased in green painted wood; the soundboard was decorated in ‘Flemish style’ with flowers, birds, butterflies and fruit. It was a copy of one made in Antwerp in 1656. In time, I discovered accessible collections of period keyboard instruments. Learning about the construction, sound and decoration of the instruments revealed aspects of social, musical and art history.

The term ‘period instrument’ is sometimes confusing. Simon Williams, Director of the Royal College of Organists Academy and Director of Music at St George’s Hanover Square, home to the Handel Festival and where Handel used to worship, explains:

The term, in the context of Western music, describes any instrument, either an original or a copy, which is particular in its construction to an earlier period (and possibly place too, as construction and playing techniques varied across Europe) and is in some way different from its modern counterpart. Most commonly this applies to music of the Baroque [1600 to 1750, composers such as Pachelbel, Bach, Handel and Vivaldi] and Classical [1750 to 1830, e.g. Haydn, Mozart and Beethoven] periods.

The saxophone, and a steel-framed, rather than wood-framed, piano with felt-covered, rather than leather-covered, hammers, by Yamaha, for example, would not be period instruments. Typical of the latter are clavichords, virginals, spinets and harpsichords.

Since the late 19th century there has been increasing interest in fostering the reproduction of period keyboard instruments as well as other period instruments on which to play period music (see notes below regarding Arnold Dolmetsch). Earlier forms of the piano, notably the square piano and the fortepiano, were played with period music, and they can be perceived of as period instruments.

Nonetheless, despite the diligence of restorers and makers, a reproduction can never be an exact replica in sound and body. The walnut and rosewood we chop and season today will never match what was grown in the same woods in the past. Climatic changes will have affected the nature of the wood, for example. Older and antique wood used for instruments and furniture will have changed throughout time. It is unlikely that the decorative detail of past instruments will ever be so extravagant in a reproduction.

Peter Thornton, former Keeper of the Department of Furniture and Woodwork at the Victoria and Albert Museum (V&A), has explained,, in his book, Musical Instruments as Works of Art,  that until about 1600 the ability to read musical notation and understand how strings could produce music was the province of an educated elite. They displayed their own instruments with other treasured possessions; and these instruments were decorated often in a manner complementing the surrounding décor.

Eventually, as more people from across society learned to play keyboard instruments, and hence wanted one of their own the shape and materials used for manufacturing became standardized, and decorative detail was kept to a minimum to meet customer demand and relatively limited budgets. Concerts for the general public also encouraged calls for lessons and instruments. Active, widespread interest in music no doubt encouraged people to appreciate that period instruments could be publicly displayed for their decorative beauty. Indeed, as the V&A is a museum of decorative arts, many of the instruments in its collection were acquired especially for their decorative qualities.

Thornton suggested that students of antique furniture pay great attention to decorated period musical instruments as most are inscribed with both date and origin. ‘Such firmly documented specimens are hard to come by in related fields. Musical instruments can, for instance, throw light on the provenance of jewel caskets and small boxes decorated in a manner similar to that of various 16th-century spinets and harpsichords.’

More harpsichords have tended to survive than clavichords, spinets and virginals, as the former are larger and more robust.  The latter are usually smaller and flimsier, perhaps because they were mostly for domestic use, for learning and practising rather than performance.

Italian period keyboard instruments were among the most elaborate. They may feature gilded and painted scrollwork, arabesque decoration over gold ground, stringing with lozenges. On one spinet we find strap work cartouches of ivory on panels of ebony, set with nearly 2000 semi-precious stones such as garnets, turquoises and lapis-lazuli. The V&A has a virginal with a lid faced with coloured glass ornaments. Keyboards may be surrounded by delicate carving, characteristically Renaissance, and there may be recessed arcading or layered cut-out key fronts. The roses of many Italian instruments were decorated with Gothic tracery, with two or three diminishing tiers penetrating downwards, like upside down-wedding cakes! (Roses are circular ornamental designs, often the maker’s trademark, set within a hole in the soundboard.)

The typical Flemish 17th century manner of decorating keyboard instruments entailed marbled panelling on the outside with printed papers for interior ornament. Strips of embossed gilt paper could be used to trim the keyboard surround. ‘Dolphin’ paper round the keyboard was a characteristic feature of instruments made by the well-known Ruckers workshops in Antwerp. Paintings of naturalistic flowers on the soundboard were also a Flemish characteristic, as our friends’ copy exemplifies. The French, by contrast, favoured japanned chinoiserie decoration.

Painted scenes could be found covering the whole of the inside lid of many Continental instruments dating from the end of the 17th-century until the late 18th century.  Mythological, biblical, pastoral and sporting themes were popular. It would be rare to find painting by artists of renown on the lids of keyboard instruments but there are tributes, albeit questionable, to Tintoretto and Rubens.

In comparison with European keyboard instruments, English ones were quite plain, relying, as Thornton notes, on exotic woods, simple lines and a ‘pleasing choice of veneers, cross banded borders and showy brass hinges and hooks for their aesthetic appeal. Only on the nameboard would here normally be ornamented, painted or executed in marquetry’. Painted soundboards are commonly found on Continental instruments while painted English soundboards are a rarity. Was this decorative reserve due to an innate British Puritan streak?

The English tended to use oak for cases, veneered with walnut, mahogany or burr elm; panelling, stringing and cross banding were popular features. French and Flemish cases were frequently made from poplar. Cases made from cypress were often associated with Italian instruments. Some descriptions of instruments note that they have been altered and rebuilt to accommodate changing musical traditions. This process is referred to as ravalement.

Hatchlands Park in Surrey is well worth visiting in order to see the Cobbe Collection of 42 period instruments. They’re displayed in beautifully furnished, once lived-in, rooms of the kind in which the instruments might very well have been played. The instruments are maintained in playing condition and used regularly for concerts in the Music Room. Fifteen of the instruments were once owned and played by famous composers such as Mozart and Chopin. At Fenton House, a charming 17th century merchant’s house, in Hampstead, one can view the Benton Fletcher Collection of 19 instruments. Visit the collection at the Royal College of Music in South Kensington and you’ll find the friendly curator on hand to answer questions.

Thankfully the joy of playing and performing period music is no longer an elitist province. People the world over appreciate the preservation, collection and reproduction of period instruments, and such enrichment enhances our knowledge of musical and art history.

How awakening the soft sweet sounds of instrumental beauty.  Let the music play, and ‘entertain you’ as Gypsy Rose Lee would sing.

The clavichord, spinet and virginal are more appropriate for domestic use and modest instrumental performances. They’re smaller than the harpsichord and piano, can be moved easily, and are softer and more delicate in tone. The clavichord is usually rectangular. Its strings, lying parallel to the keyboard, are struck by tangents, which are metal blades mounted and standing upright on the backs of the keys. They remain in contact with the keys while sounding, enabling a versatile tone.  The virginal aka ‘virginals’ is also usually rectangular with strings running parallel to the keyboard. The strings are plucked, as with the spinet and the harpsichord. The most likely explanation for the name is that ‘young ladies’ usually played it, as Samuel Johnson says. The spinet is laterally tapered, or polygonal. It is sometimes perceived as a smaller harpsichord and also as a precursor to the harpsichord. Shaped like the spinet, the harpsichord is the largest and grandest of traditional period keyboard instruments; its strings are also plucked, but set at right angles to the keyboard. Some harpsichords have two manuals , which are rows of keys.

Arnold Dolmetsch (1858–1940) was a leading figure in the 20th century revival of early music. He learned how to make instruments in his family’s business and later studied music. Inspired by museum collections of keyboard instruments, he began making clavichords and harpsichords, and established workshops in Haslemere, Surrey, for manufacturing and repairing period instruments. Sadly they closed in 2010.

The arts and crafts movement is identified with Dolmetsch. William Morris encouraged Dolmetsch to make his first harpsichord. It is said that Dolmetsch visited Morris in 1896 as he lay dying in Kelmscott House, and played for him on a 16th-century virginal. The following year Dolmetsch made a clavichord for the daughter of Edward Burne-Jones, which the artist decorated. Indeed, Burne-Jones designed several pianos with the simple angular shapes of 18th-century harpsichords, eschewing the large dimensions of contemporary instruments.

These addresses may prove useful for more information. http://www.cobbecollection.co.uk (at Hatchlands Park, Surrey), http://www.rcm.ac.uk/life/facilitiesresources/museum/ and http://www.nationaltrust.org.uk/fenton-house-and-garden.

The photograph is of a harpsichord, Trasunto, Venice, 1531, ©Royal College of Music.

This article first appeared in Cassone: The International Online Magazine of Art and Art Books in the December 2011 issue.