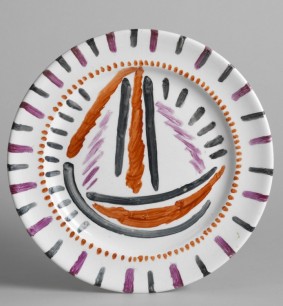 Maybe you love where you live because your home has this wonderful, inexplicable spirit of place – you’d never live anywhere else – even though the wiring and plumbing are temperamental and damp creeps up the walls. This is probably something like what the writer Virginia Woolf  (1882–1941) felt while living at Monk’s House, Rodmell, near Lewes, Sussex.

When she saw the sign in an auctioneer’s office in Lewes for ‘an old fashioned house standing in three quarters of an acre of land to be sold with possessions,’ and the next day she bicycled over to see it, she was smitten. The quiet, secluded setting in the village, the stunning views of the Downs, the wayward fertile garden and the thought of a monastic (admittedly dubious) connection were strong temptations. Indeed, the artist Eric Ravilious (1903–42) has evoked beautifully all that lay before her in his watercolours and woodcuts of the Downs and Sussex rural life.

In her diary Virginia recalled: ‘the infinity of fruit bearing trees, the plums crowded so as to weigh the tip of the branch down…There were well kept rows of peas, artichokes, potatoes; raspberry bushes had pale little pyramids of fruit; and I could fancy a very pleasant walk in the orchard under the apple trees…’ The tranquil air and weatherboard, brick and flint house would help choke the flow of her bouts of mental illness, soothe her soul with contentment.

Virginia wasn’t blind to the disadvantages of the cottage: ‘these rooms are small…The kitchen is distinctly bad. There’s an oil stove, & no grate. Nor is there hot water, nor a bath, & and as for the E.C. [earth closet] I was never shown it…’

With a high bid of £700, the Woolfs bought the house and moved in on September 1, 1919. For over 20 years they came to Monk’s House for weekends, and sometimes for much longer periods.

First they renovated the kitchen, adding a solid fuel oven. Six years later they added a bathroom and two lavatories, with the proceeds of Mrs Dalloway and The Common Reader, just after which, their close friend Vita Sackville-West recalls, they used to ‘run upstairs every now and then and then pull the plug just for the sheer fun of it, and come down and say, “It worked very well that time – did you hear?” ’

They also knocked down the wall between the dining room and the drawing room to create one large sitting and dining room, allowing five windows to enjoy, as Virginia described, the ‘flowers and leaves nodding in all round us’. A two-storey extension provided Virginia with a small upstairs sitting room above her ground floor bedroom. An attic was later converted into a library for Leonard. Eventually, electricity, a refrigerator, electric fires in all the bedrooms and a telephone arrived.  On the site of an earlier studio in the garden, a new wooden studio was built.  This was Virginia’s lodge, where she wrote during the summer.

At the auction the Woolfs bought various pieces of furniture, pots and pans, cutlery, gardening tools and three naive portraits of the Glazebrooks, a family of millers who had lived at Monk’s house in the 19th century. When they holidayed in France, Virginia also bought painted earthenware and the odd bit of furniture for the House. She painted the walls herself in shades of blue, yellow, pomegranate and green.  As Virginia’s sister, the artist Vanessa Bell, her family and partner, the artist Duncan Grant, were living nearby at a farmhouse in Charleston, Virginia also commissioned Vanessa and Duncan to design furnishings for the house. Their creations were very much in the style of the Omega Workshops, an interior design company that was established and run by Vanessa’s friend, the ‘Bloomsbury’ art critic and painter Roger Fry, from 1913 to 1919, when Omega closed. (See notes below.) Bell and Grant also gave the Woolfs many of their paintings, which included portraits, still lifes, landscapes and a notable painting by Vanessa of Newhaven Harbour, to enjoy at Monk’s House.

The Woolfs gloried in reclaiming the garden. Leonard planted exotic flower species – perhaps they reminded him of his times as a civil servant in Ceylon – and ran three heated greenhouses. There were two fishponds, which still remain but without the fish!  Much of the garden statuary came from a grocer’s shop in Crawley. In 1928, they purchased an adjoining field to secure their unspoiled views of the South Downs.

The Woolfs would work in the mornings. Leonard, a writer, journalist and political activist, was probably more preoccupied than Virginia with the business of the Hogarth Press, which he and Virginia had established in 1917. Virginia usually wrote while sitting in a low armchair with a plywood board across her knees and an inkstand glued to it. Later she would type up the morning’s work, revising as she went along. After lunch they would work, read – Virginia would smoke – garden and take long walks. They were avid bowls players.  Sometimes Virginia would bake bread, bottle fruit or embroider. In the evenings they listened to the gramophone.

Although they treasured their shared solitude, sometimes the Woolfs had guests to stay. Nigel Nicholson, E.M. Forster, Elizabeth Bowen, the poet John Lehman and Vivien and T.S. Eliot visited, among many others such as family and visitors to Charleston.

Monk’s House was indeed creative inspiration for Virginia. There she wrote Mrs Dalloway, To The Lighthouse, Orlando, A Room of One’s Own, The Waves and Between the Acts, while also writing essays, reviews and short stories.

But despite the comfort of Sussex life the threat of war eventually loomed. It wasn’t outlandish to fear that the south coast of England would be invaded. Virginia attended fire drills and first aid lectures. Gas masks were issued. The Woolfs were aware that their names could be on the Gestapo’s arrest list (and, indeed, were) as they were well-known intellectuals and Leonard was by background Jewish. But they would rather die by their own hands; Leonard kept gas in the garage so they could asphyxiate themselves and Virginia’s brother Adrian, an army doctor, issued them with a prescription for morphia.

‘We live without a future,’ Virginia wrote in her diary at the time, and despair invaded her sanity, swallowing it up like quicksand. She felt as if she were going mad again and despite Leonard’s assured help and the love they shared – ‘I don’t think two people could have been happier than we have been’ – before lunch on Friday the 28 March 1941, Virginia donned her fur coat, walked down to the River Ouse and put a large stone in her pocket. She let the current pull her under.

Leonard buried Virginia’s ashes in the garden at Monk’s House, under the elm trees the Woolfs called ‘Leonard’ and ‘Virginia’. Throughout the rest of his life he continued to garden, travel and write, and work with the Labour Party and the Hogarth Press (now a subsidiary of Chatto & Windus).  He found personal fulfilment with the artist Trekkie Parsons. He was also very involved in the community of Rodmell with the Parish Council, the cricket club and the horticultural society. Eventually Monk’s House passed to the University of Sussex; it is now under the auspices of the National Trust.

Today, the fairy tale, higgledy-piggledy atmosphere of Monk’s house still enthuses, and we walk in the enchanting garden and view the downstairs, the artwork and Omega style furnishings which the Woolfs enjoyed. Especially notable in the sitting room are the large table topped with tiles painted by Duncan Grant depicting ‘Venus at her toilet’ by a riverbank, with another semi-clad goddess and set within a ‘tile framed’ surrounding, and a canvas-work fire screen, designed by Grant and ‘worked’ by his mother, with an image of a white vase, books and a stringed instrument resting on a table by a window revealing a gentle seaside view.

In Virginia’s bedroom there are tiles painted by Vanessa for the fireplace, depicting a lighthouse and yacht perhaps inspired by Woolf’s novel To the Lighthouse. In the dining room, really more of a recess, hangs a large, very pretty mirror with a canvas-work frame of flowers, designed by Grant. Throughout the downstairs there are Omega-style ceramics, and lovely paintings by Vanessa and Duncan. In the lodge there is a permanent exhibition of photographs of social occasions with friends – mostly members, like the Woolfs, of the ‘Bloomsbury Group’ (see notes below) – and happy times at Monk’s House.

A short distance away you’ll find Charleston House, where on guided tours you can see more decorative art in the style of the Omega Workshops and paintings by Pissarro, Renoir, Sickert and Toulouse-Lautrec.  Nearby is Berwick Church where there are wonderful murals of religious themes, set within the context of wartime Sussex, painted by Grant, Bell and her son Quentin.

Uncannily, we stumbled upon Monk’s House when we were looking for a sumptuous stately home. We took one wrong turn and then another and spotted the sign. Something so captivating about the setting made us park and put the map away. We, too, shared the Woolf’s joy in the surroundings, their home, and the spirit of place they fortified. Why we felt what we felt, I don’t know; that’s just way it was.

Roger Fry’s Omega Workshops tried to create aesthetic relationships between walls, architectural features, furniture, fittings, ceramics, screens and fabrics – schemes for small domestic settings – in both muted and bold colours. The artists were inspired by Italian frescoes and mosaics and the modernist work of the Post-Impressionists and Cubists. The Greek letter Omega Ω identified the designs.

Omega artists shied away from the ornate and detailed, in favour of curvilinear and geometric abstract forms, simplified images of people, animals, flora and fauna, land-, sea- and sky-scapes. There are expressive touches of musicality, whimsy and playfulness infusing their work. Vanessa Bell, Duncan Grant, and the Vorticists Gaudier-Brzeska and Wyndham Lewis were well-known contributors.
Although the work of the Workshops is not widely appreciated as iconic or associated with a particular artistic movement, it is commendable, memorable and collected for its aesthetic value. Arguably, the Omega style has had at least an indirect influence upon contemporary craft and interior design.

The ‘Bloomsbury Group’ were talented and influential early to mid 20th-century writers, such as the Woolfs and Lytton Strachey, and artists, notably Duncan Grant, Vanessa Bell and Roger Fry. The economist Maynard Keynes was also associated with the group. Although members did not always share the same opinions or life circumstances, they all felt a deep sense of camaraderie on account of their opposition to the strands of Puritanism endemic within British culture.

For information about opening hours, please refer to http://www.nationaltrust.org.uk/monks-house.

This article first appeared in Cassone: The International Online Magazine of Art and Art Books in the December 2011 issue.