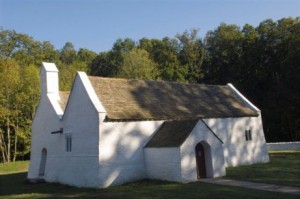 On Sunday mornings, when my husband Stephen was still in his pram,  his father used to take him to visit St Fagans open-air Natural History Museum, just outside Cardiff, a mile or so from Llandaff where the family lived.  While the two of them explored the grounds, visiting the ‘resurrected’ historic buildings, Stephen’s mother prepared the Sunday lunch. When Stephen was a little older his father Alex would stay at home and cook the lunch, while his mother, Margaret, took Stephen to Llandaff Cathedral. Soon after the family settled in London, the sites became but misty memories of contentment for my husband – sites we’d visit together one day, he promised.

On the afternoon of last New Year’s Eve, we made such a visit,  laughing, in the rain and gnawing chill, about the fact that such division and details of labour between a man and his wife would never have occurred among the people who once lived and worked in and around the buildings displayed. This is quite an unusual open-air museum – one of a kind  – with its broad range of buildings on view (over 40), most originating elsewhere in Wales and re-erected on site, some fitted and furnished in keeping with their purpose and the users’ social and cultural backgrounds.

In many cases the landscape surrounding the buildings also reflects the culture and social status of the former occupants as well as local geography. For example, historically appropriate crops may be grown and the produce shown in the buildings. In the open there are traditional breeds of Welsh livestock, such as Welsh Black cattle and Hill Radnor sheep. There’s no artificial lighting in the buildings where historically there wouldn’t have been electricity.

We stroll along pathways lined with drystone walls, stopping to explore homes, farm and industrial buildings, such as woollen and gorse (horse feed) mills, places of worship, workshops where artisans demonstrate their skills, some choice examples of vernacular architecture (see Background info box). St Fagans is devoid of the tinsel of tourism – litter, souvenir stalls, garish signs and snack bars. We feel as if we’re venturing back in time to a village or small town, as, like St Fagans, such areas evolve in an architectural context. We experience living history, how environment influenced human life, and behold the future, too, as there is even a learning centre, formally known as the House of the Future, exemplifying an eco-friendly family home reflecting a low-carbon lifestyle.

Thatched-roofed Kennixton Farmhouse, first erected in 1610, is a typical south west Wales farmhouse, especially interesting for the red (from oxblood originally) lime wash on its exterior walls, believed to ward off evil spirits. The ground level floors are made from a mixture of clay, seashells and crushed stone, much more sophisticated than the once commonly found floors of hard and uneven beaten soil. In the garden is a bee shelter where twisted-straw hives (‘skeps’) would have been kept, their open ends placed downwards.

Llainfadyn Cottage was originally built in 1762, in Rhostryfan, Gwynedd, north-west Wales, for a quarryman’s family. It has foundations of enormous mountain boulders, walls made from smaller mountain stones and a slate roof, bedded on hay or straw mixed with mud, atop oak beams. Downstairs the cottage is divided in half by furniture, a common means of partition. There’s a half loft – cockloft or croglofft – reached by ladder, which Peate, the Museum’s founder, suggested evolved by placing planks across the tops of two ‘box’ or ‘wainscot’ beds – beds with wooden ‘ceilings’, heads and ends.

The circular dry stone pigsty of about 1800, from Pontypridd, South Wales, is typical of the area. The roof is corbelled: each circle of stonework is gradually reduced, forming a dome. The top opening is covered with an upright stone finial or flat stone. Brushes were made from pigs’ bristles, leather from their skin and black pudding from the blood. The dovecote reminds us how valued pigeons were for their meat, eggs and droppings (as fertilizer).

At the slate roofed and limestone walled smithy, originally built in Llawr-y-glyn, Powys, mid Wales, in the late 18th century, the resident blacksmith makes decorative forge work for sale using traditional equipment. Beyond, there’s a roofed stone kiln, dating from 1800, originating in Ewenni Bridgend, South Wales, a village known for its potteries since the Middle Ages. A ridge of boulder clay lies north of the village, and there’s local coal for firing the kilns. Wares, such as milk pans, churns and bowls, chamber pots, money boxes and wassailing bowls were made for the locality. The St Fagans Pottery Company produces handmade pottery on site.

We walk in and out of a terrace of six houses for ironworkers employed in a mine in Merthyr, once a major iron-manufacturing town in South Wales. The houses are displayed with their contents (including cooking utensils, ranges, mementoes) and gardens to illustrate different historic periods: 1805, 1855, 1895, 1925, 1955, and 1985. In the garden of the 1955 house is an Anderson Air Raid Shelter, a small corrugated iron structure erected, as many others were throughout South Wales, during the Second World War, for fear of aerial bombing.

Another unusual display is the furnished Type B2 Aluminium Prefabricated (‘prefab’) Bungalow – ‘tin palace’ – built near Cardiff in 1948. Prefabs were meant to be short-term measures, temporary two-bedroomed housing for people whose homes had been bombed during the Second World War; yet thousands of the 153,000 built in Britain were still in use 50 years later. The bungalows were produced in factories that were once aircraft factories during the War. 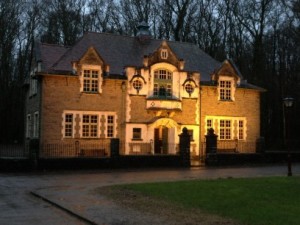 Particularly striking is the handsome stone and brick Workmen’s Institute, built in 1916, for the ‘model’ village of Oakdale, commissioned by the coal-mining owners for the workmen and their families. Such institutes, common in industrialized areas in south and north-east Wales at the end of the 19th and early 20th century, were cultural, social and educational centres, enabling the working classes to ‘better’ themselves. This building included a library, reading and committee rooms, offices, concert hall and cinema hall. Maybe Alex’s parents were visitors? The Institute was only 14 miles from their house in Newport.

Another splendour, beautiful for its simplicity, is St Teilo’s church, originally sited in Llandeilo Tal-y-Bont, near Swansea, South Wales. The slate-roofed and stone-walled church, with a white limewash exterior, was built during the 12th century and has been altered and extended significantly since. St Teilo’s has been re-erected and refurbished as it might have appeared in 1530. During excavation, a series of wall paintings dating from this period were discovered. Replicating the paintings and the period architectural details presents the church in ‘pre-Reformation splendour’ – something rarely seen since Henry VIII’s reign.  We see features associated with a late mediaeval Catholic church such as a rood screen (a hand carved reproduction) and loft between the nave and chancel. The church is home to a recreated mediaeval-style organ. 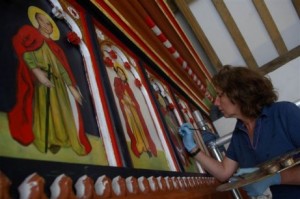 Indeed, several layers of paintings were discovered and the oldest were preserved, owing to their rarity. Unfortunately, the top layers had to be destroyed in order to do so, but each layer was recorded and photographed. The original artists are unknown. The restored paintings are striking for their vibrant colours and Spartan simplicity with clear, uncomplicated images, drawn with smooth lines and few shadows, some framed with angled lines enclosing Tudor roses and scrolls, such as Christ in Majesty (possibly linking the King’s right to rule to God).

For the sake of comfort and preservation a controllable underfloor heating system was installed – a wise initiative. Heating and dryness cause timbers to dry out, shrink and crack and lime plastered walls to loosen. Too much moisture and frosty air causes condensation and mould.

Privately organized services are held regularly at the Church. When St Teilo’s was finished, the Archbishop of Canterbury, Dr Rowan Williams, gave the opening address.

For further enjoyment at St Fagans, there’s a visitors’ centre at the entrance, housing exhibits about contemporary life in Wales and folk life in the past, including costume displays. I can see why in October 2011 Which? magazine voted St Fagans the UK’s Favourite Tourist Attraction (over 600,000 people visit annually).

What we view was created very much by the people and for the people – sources of humble pride, not necessarily fashionable, grand or prestigious. We’re enchanted by what many might see as unremarkable but which is in fact a most pleasurable introduction to Welsh folk-life heritage. We appreciate the aesthetic value of amateur artistry, the enlightening craftwork, travelling far away from displays of gold, silver and marble or the chic milieu of conceptual art to reach a well of soulful and artistic refreshment.

Iorwerth C. Peate (1901–82), a poet and scholar, was the inspiration for St Fagans and its first curator.  He was interested in the sociological perspective of Welsh vernacular architecture, how the buildings and Welsh ways of life relate to  each other. He realized that the buildings would eventually disappear – fall into disrepair, be ‘improved’ beyond recognition or replaced, unless they were preserved and conserved. Inspired by the open air museums of Scandinavia, such as Skansen, he was determined to establish one in Wales. With charitable, public and local government support, together with the Earl of Plymouth’s donation of his late 16th-century manor house (also open to the public) and part of the site, St Fagans opened in 1948.

‘Vernacular’ architecture, e.g. cottages and farm buildings, minor industrial buildings such as corn and woollen mills, and places of worship. The buildings are constructed using local resources and materials reflecting personal and communal needs and cultural, social, economic and geographic circumstances. Form reflects function; there may be simple adornment but beauty is not a prime specification. Over time many such buildings have been altered and extended as social and economic circumstances changed. Original vernacular architecture is becoming increasingly rare.

Welsh vernacular buildings often have slate roofs and vertical rather than hipped ends, or are thatched. Walls may be stone or timber framed and infilled with wattle and daub (interwoven twigs and branches plastered with mud and possibly dung) and quite often white or simply lime washed. Building materials such as clay tiles, pantiles, brick and flint are not characteristic.

For information about opening hours at St. Fagan’s, please refer to http://www.museumwales.ac.uk/stfagans/

Photographs of St. Teilo’s Church, the Workmen’s Institute and the conservator painting the rood screen at the Church, courtesy of St. Fagan’s Natural History Museum.

This article first appeared in Cassone: The International Online Magazine of Art and Art Books in the February 2012 issue.