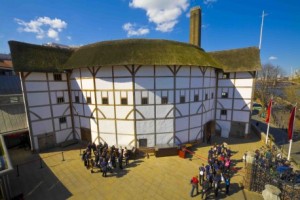 Recently, I enjoyed a tour and a backstage visit at the Globe theatre with a new friend, Shakespearian actor Colin Hurley, whom I met through my son, Tom. Colin had starred in Tom’s award-winning film, Black Pond (2011). At the Globe, Colin has played a wide range of roles, including Antonio in Twelfth Night and Lucio in Measure for Measure. Colin regularly leads Globe educational workshops.

As Colin reminded me, it was the American director and actor Sam Wanamaker (1919–93) who led the 20-year campaign to reincarnate the Globe as a centre for the celebration and study of Shakespeare’s work. Sam hoped its reconstruction, based on scholarly deduction as there are no definitive resources, would reflect as much as possible the original Globe, built in 1599. This building burned down in 1613 when its thatched roof was set ablaze by a cannon fired during a performance of Henry VIII. Fortunately all the audience members – some three thousand people – escaped.

Today’s Globe is constructed, for the most part, using traditional building materials and techniques. For example, to build the brick foundation wall, bricks slimmer than modern day ones, measured in accordance with what existed in Elizabethan times, were specially made. The yard is covered with the mix of ash, clinker, sand and hazelnut shells, similar to the ground cover archaeologists found on the sites of the Rose and Globe playhouses. The limewashed plaster covering the laths is the historic Elizabethan mixture of sand, slaked lime and animal hair.

For the sake of health and safety and building regulation codes, a fireproof sheet is sealed between the coats of plaster. The water reed thatch is treated with a fire retardant chemical. Whereas there were possibly two narrow entrances, there are now four, for a maximum audience of 1500.

We enter a timber-framed, 20-sided polygonal edifice with three tiers of galleries surrounding an open yard. Projecting into the yard is a raised and canopied stage. Two frontward pillars help to support the canopy and a boarded and gabled ‘box’  above, now used for storage, but where in days past lived the cannon!

The back wall has three openings with panelled doors. Part of a scene may be played just behind the central opening – the area behind this ‘mini stage setting’ is known as the ‘tiring’ or ‘attiring’ area, where,  then and now, the actors prepare. Pillars either side of the openings support a balcony for musicians and actors – Juliet, for example, in the balcony scene – and where in the past the great and grand may have sat, unless they were seated in the third tier.

In those days one came to listen: the poetry of the words and the images they evoke, were valued relatively more than what the eyes could see. How much more relaxing, it was considered, to be far from the vulgar and unwashed plebeians, sitting in the lower tiers or standing in the yard, heckling and chomping apples and nuts in between slurps of ale. No wonder it was more expensive to sit high above. These days commentary is relatively more restrained. Now as then, there are no elaborate sets. Scenes are ‘set’ with props, dramatic references, costumes (characters wearing nightdresses, for example) and imagination.

In Elizabethan times plays were performed in the afternoons only; our Globe stages productions twice a day, May through October. ‘Faint lighting above the stage and in the galleries, ensures we play in a shared light,’ Colin explains. As Shakespeare wished, plays continue in spite of the mood of the elements.

While the exterior is unassuming, the interior is sumptuous. The canopy represents the Heavens; below lurks Hell, out of which devils and ghosts emerge through a trap door. The stage and nearby areas are painted as they could have looked in Shakespeare’s day, with the sun, moon and stars, signs of the zodiac, planetary deities, the bare-breasted muses of Tragedy and Comedy, and painterly illusions of stone, marble and semi-precious minerals.

Although we find many examples of theatres with such ‘apron’ stages throughout the world, they are less likely to encourage the intimacy that Shakespeare’s Globe evokes between the actors and the audience. Neither could ‘traditional’ theatres with a stage isolated on three sides from the audience and framed with a proscenium arch evoke such a sense intimacy.

‘The architecture teaches a lot. There’s a fluidity of location, a fluidity between public and private,’ Colin Hurley enthuses. ‘The actors and the audience share the space. They are much more mobile than they would be in a traditional theatre. Lots of scenes are more public and populated than they may first look on the page. We act within a circle. There’s more laughter, even in the tragedies. The Globe’s a place to share a story, rather than deliver one.’

When Colin takes me on the stage, in front of the tourists and schoolchildren, I feel physically exposed, a little self-conscious. The ‘wings’ can’t hide me. I can’t play the ostrich, except when I’m backstage with Colin in the ‘tiring area’ – which is so much more comfortable than its historic predecessor: warm, with drinks (non-alcoholic!) on offer and deep raised sofas enabling actors wearing Elizabethan dress to sit without worrying about the difficulty of raising their stiff and voluminous skirts.

Colin explains: ‘there’s no fixed policy about costume at the Globe. There are modern productions, and “original practices” – for these types of production, often actors wear the costumes during rehearsals. Getting used to wearing clothes that are so different – not easy to put on and take off, with so many fiddly bits – helps us feel comfortable in our skins on such an ‘exposed’ stage.  The clothes need breaking in, like shoes used to when I was a kid’.

In Elizabethan times, it wasn’t acceptable for women to act on stage, so boys or very young men played the women’s parts. Boys’ voices broke later than they do now.  If the Globe is being true to form, young men play the women’s roles.

‘Some male actors try to raise the pitch a little; and the men need the time to learn how to move in the incredibly restricting corsets – one can’t bend at the waist so naturally,’ Colin says. ‘It’s a strange experience. You take shallower breaths when you’re wearing a corset.’

Costumes for the traditional Shakespearean productions are hand-made using materials, trimmings, styles and techniques resembling, in as much as possible and practical, those prevailing in Elizabethan times. Organic dyes are used, for example, to recreate the colours of the materials. Benedict’s Beatrice would never have had the luxury of Velcro or zips.  Fourteen hundred pearls were individually sewn onto Elizabeth’s I costume, the various layers of which were pinned together. It took 90 minutes to dress Jane Lapotaire when she played the Queen in 1997.

Globe actors for the most part wore the dress of their own time. It might have been difficult and too costly to make period costumes for all the plays, given the expense and rapid turnover of the repertoire.  Julius Caesar might have worn a toga and his own breeches and shoes. But this wouldn’t necessarily preclude the sumptuous, for it was customary when distinguished gentlemen or knights died for their fine clothes to be given to their servants, but as it wasn’t ‘proper’ for them to wear such clothes they sold them to actors for a small sum. Also, companies commissioned people to make the more fabulous and expensive clothing that might not otherwise have been available.

Being ‘proper’ refers to the sumptuary laws for dress, which first appeared in 1574. These distinguished the appearance of different classes by determining which fabrics, colours, and clothing styles each social class should wear. The rigid distinctions helped to maintain the social structure and to limit clothing expenditure.

Actors in performance were exempt from these rules. Hence, what an actor wore on stage was an immediate means of identifying his character’s social and professional status. It was as if the colours, fabrics, adornments and shapes of the attire could speak.

Just before I went on a tour, I attended a clothing workshop. The leader asked me if I’d be the dressing-up model, Mopsa, a foolish shepherdess in love with a clown, in The Winter’s Tale. But there wasn’t enough time before the tour; and I wouldn’t have been able to take notes if I’d been securing stockings!

Alas, such a chance may never arise again in a theatre like the Globe, where unusually the plays and the audience enfold all manner of humanity, and space and decor prompt energizing dialogue between actors and spectators. Such fuel, I fear, could never be found elsewhere.

Sam Wanamaker’s love of Shakespeare began when he appeared in a plywood-and-paper replica of the Globe at the Chicago World Fair in 1934. After studying drama, working in repertory, and serving in the Second World War, Wanamaker became a leading director and actor. He created the Festival Repertory Theatre in New York in 1950.
Wanamaker feared blacklisting by the House Un-American Activities Committee for his left-wing views. He went to Britain and worked with with Laurence Olivier and Michael Redgrave among others,  and directed several highly acclaimed operas. After resuming his career in America he kept a strong foothold in the UK. He was happy to direct both Verdi and an episode of Hawaii Five-O. When establishing the Globe, he attracted such supporters as Dustin Hoffman and Michael Caine. Southwark local council wanted social housing on the site rather than what they saw as a bastion of elitism, but Wanamaker convinced officials that the project would regenerate a depressed area. The Globe opened in 1997.

During Elizabethan times, both sexes wore a linen shirt or smock, possibly embroidered, and fastened with cord ties at the neck and cuffs, and woollen or silk stockings. Men also wore breeches and a doublet, a fitted, possibly sleeved garment, with or without a collar or short skirt. Over this went a jacket, coat, cloak or sleeveless jerkin. Men usually wore a gown; longer gowns being for the learned professions, such as doctors. Women’s outer clothes combined a petticoat, possibly broadened with a hoop (a farthingale) and a kirtle (skirt), with or without an attached bodice. A whalebone-stiffened bodice (corset), reaching up to the breasts was ideal for strengthening the back. Over all went a full-length gown, perhaps with a train. Low-crowned bonnets were popular.

This article first appeared in Cassone: The International magazine of Art and Art Books in the February 2012 issue.