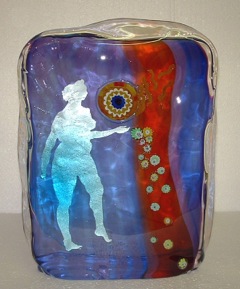 His beard, moustache and shoulder-length hair are streaked with grey and white; bushy eyebrows overshadow probing dark pupils; the crumpled jacket is loose, robe-like. Tolkien’s wizard Gandalf comes to mind when I meet Stuart Evans, the partner with the law firm, Simmons & Simmons, who since the early 1990s has spearheaded the development of the company’s contemporary art collection.  I’m on a private tour of the collection at the firm’s London offices – minimalist décor reigns.

Indeed, there must be a touch of magic about Evans as he has a history of buying the work of emerging artists who eventually become sought after. He could be an icon in the corporate art-collecting world. For not only is he a renowned corporate art collector but also, since 2006, together with his son, John, he’s been building his own collection of contemporary art (Lodeveans) which focuses on the work and promotion of Latin American artists. The work is available for loan and for sale in a north London gallery. Moreover, Evans brings wisdom and a passion to the endeavour. There’s no air of self-aggrandisement about him: ‘I buy what I believe in, not what fills the space; you have to follow your gut’. Would any other ‘heads’ of corporate art collections fit a similar description?

The tour mainly follows the art displayed in the meeting rooms, which lead off from a reception area where we first encounter Ian Monroe’s vast mixed media on paper, 210 x 360 cm, Untitled – which depicts speakers in all sorts of shapes and sizes.  Painted on another wall, with acrylics and varnish, is Paul Morrison’s huge, 1500 cm wide, Apogee (tree and leaf shapes, essentially).

Meeting rooms each feature at least one or two artworks. We see work by Tracey Emin and Rachel Whiteread among the images. I’m drawn to Neil Gall’s junk model painting, Cast, and two colour photographs, both entitled Stranger by Shizuka Yokomizo. Evans explains that Yokomizo has sent her subjects an anonymous letter proposing they stand in the front window of their home with the lights turned on. She specifies a date and time, at which point Yokomizo will arrive outside, set up her tripod and camera, expose her film, and then leave. If the possible subjects choose not to participate, Yokomizo asks them to signal this by drawing their curtains. The time selected is during the night, so subjects discern the photographer only as a shadowy figure.

Towards the end of the tour, we descend to the lower ground floor to the staff dining room to see Hirst’s Pharmaceutical Wall Painting (a ‘spot’ work), which came with installation instructions, tools and 150 tins of enamel paint. Next door we view an exhibition called House Rules, which addresses social exclusion among the economically and socially disadvantaged. Although the firm sees the exhibition as a way of ‘reaching out to the community’, how many of the ‘victims’ will view the work? Still, the display of disturbing images in an elitist milieu deserves praise, if only because it forces spectators to think about social justice and the misfortune that lies below the culture of privilege. Richard Billingham’s photograph of a man, sprawled on the floor of a broken, faeces-streaked lavatory in an ugly cubicle isn’t pretty.

Although the exhibition could be deemed unusual in the realm of corporate art, such art collecting in general is not a new phenomena. Shirley Reiff Howarth, the editor of the International Directory of Corporate Art Collections, notes that art has featured in the workplace for centuries. Bankers, such the Bardi and Medici families, who collected art for their palatial homes, were in fact collecting art for their business premises as they ‘worked from home’. The earliest bona fide bank collection is that of the Montei dei Paschi in Siena, initiated in the late 15th century, and still in existence. ‘Buying’ art was a means of decoration, artistic patronage, and a symbol of prestige and refined taste. Patronage of church art was perceived as a promising way to ensure salvation for the patrons, especially bankers, who were acutely aware that their dealings in the world of money lending were regarded with suspicion by the church; bankers inhabited the frowned-upon milieu of usury.

In the 19th and 20th centuries, featuring ‘art in the boardroom’ – portraits of founders and senior figures, oil paintings and watercolours depicting hunting scenes, seascapes and landscapes – was a sign of the revered qualities of solidity and establishment. There were a few firms that did initiate more diverse collections, such as The Seaman’s Bank for Savings. In the 1830s it began its nautically themed assembly, which is now housed in the South Street Seaport Museum in New York.

What is ‘new’ about corporate art in the late 20th and early 21st centuries is that its collection and display is systematic, a clearly delineated part of an increasing number of companies’ business strategy; that the business of corporate art now offers a range of employment opportunities; that it is also an educational subject (Sotheby’s Institute of Art offers an MA in Art Business, for example); and, finally, rather than assembling art that reflects robust and impressive ancestral roots, the contemporary is chosen deliberately to signify creativity  and innovation. ‘Hirst on the wall? You’ve definitely got the competitive edge.’

For insight into the field of corporate art collecting:  the mechanics, management, motives, and associated activities, it is worth reading the recently published book Corporate Art Collections – A Handbook to Corporate Buying by Charlotte Appleyard and James Salzman. Although the authors claim this is geared towards those intending to work in, or are already involved in, the corporate art business, because the book is so articulate and well organised, and features plenty of fascinating and well-explored corporate examples, it would also appeal to anyone interested in art display and collection in a non-museum context. (The corporate collections discussed are selected for their ‘quality’; and the number of artworks in the collections ranges from 400 to 30,000.) There are chapters exploring the ‘art’ of taxes, disposals, dispersals, what to consider when initiating a collection, and interviews with consultants and artists.

The corporations studied are divided into four groups, each supposedly reflecting the primary ethos of why they collect, though the divisions seem somewhat arbitrary. ‘Emblematic’ collections say something about the company’s business. The intention for Cazenove & Co is  ‘to remove any notion of the company being an old fashioned London City firm’. ‘Environmental enrichment’ is another theme.

The main aim of Deutsche Bank is to create a more stimulating working environment and encourage staff, customers and visitors to be more involved with the arts. (Simmons & Simmons are also grouped here.) ‘Patronage’ is another overriding principle.

The large Mexican firm Jumex, a fruit juice producer, hopes its collection will promote the ‘development of Mexican society in the fields of art, culture academics and education’. It funds and runs educational art oriented programmes. For the ‘all rounders’, the collection is ‘fundamental to the corporate culture, the well-being of the employees, and ultimately the success of the firm’. One example is Louis Vuitton, which has commissioned artists such as Takashi Murakami and the late Solomon ‘Sol’ LeWitt to create designs that the company has incorporated in its products.

What is characteristic of all the collections is that profitable investment is not a primary or secondary motive, while social and cultural investment and exercising social responsibility are major considerations.  Image enhancing and product differentiation are part of the drive, but never the sole impetus.

Most of the firms discussed have been involved in commissioning work, an endeavour requiring sensitivity and tact on the part of both the artists and the corporations in order to ensure a successful outcome. Many artists welcome the commissions to enhance their profile and income but fear that their creativity could be compromised by the assignment.

The artist Charlotte Hodes who, among other corporate commissions, created the ‘Oscar’ trophy that was awarded in 2007 by Arts & Business to partnerships between arts and business organisations, offers a balanced perspective.

‘That the artist can “free float” in a studio is a myth,’ says Charlotte. ‘One harnesses all the talent, ability, resources and time that there is working within a framework. An artist always has to negotiate a way forward in spite of these constraints. Parameters always exist. Yes, with a commission, constraints are imposed from the outside, but in some contexts they can be enthusing and expand horizons. It can be a relief, after finishing a commission, to return to the intimacy of the studio, with no external intervention in the creative process.’

Hodes emphasises the advantage of corporations working with an ‘agent’ when determining the nature of commissions. The consultant can be a positive mediating force, relatively more sympathetic to the creative needs of the artists.

Some mutter scornfully that corporate art collecting is purely posturing. But if the supposed posturing takes the guise of a civilising, beneficent step, at a time when funding for the arts is increasingly limited, is the contempt wholly justified?

Here is an insightful quote, expressed in 1966, from David Rockefeller who initiated the art collection of the Chase Manhattan bank:

The arts are a vital part of the human experience, and surely our success as a civilised society will be judged largely by the creative activities of citizens in art, architecture, music and literature. Improving the condition of the performing and visual arts in this country calls, in my judgement, for a massive cooperation effort in which businesses must assume a much larger role than they have in the past.’

The image above features hand-cut silver leaf and murine in glass, the trophy for Arts and Business Awards, 2007, made at Berengo Studio, Murano, Venice, by Charlotte Hodes. Courtesy of the artist.

This article first appeared in Cassone: The International Online Magazine for Art and Art Books in the February 2013 issue.