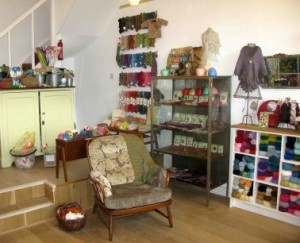 Grayson Perry’s Walthamstow Tapestry illuminates, with a despairing aura, the vast extent to which branding and consumerism are ingrained in our lives; how, starting from when we are very young, they weave their way into our minds, influencing what we eat, wear, drive, read, how we furnish our homes and where we holiday and work. In the tapestry, brand names are interwoven within scenes of people tending to everyday mundane tasks. There are also quasi-religious depictions. For example, we apparently see the three wise men (one carrying a baby) delivering ‘labelled’ gifts to a devilish creature; and we see an exquisitely groomed, head-scarfed woman cradling a Chanel-like bag in her arms.

The tapestry is on loan to the recently reopened and refurbished William Morris Gallery in Walthamstow (where Perry has a studio). It is a most appropriate choice.  Perry echoes Morris, as Morris was also concerned with the social and emotional ramifications of the ‘things’ in our lives. Morris perceived the industrialisation of production as devaluing the importance of the handmade and the homemade, stifling creativity, individuality and cohesive community endeavour. He lamented the demeaning soullessness of laborious factory jobs, imposed for the sake of productivity and consumer nourishment.

Fortunately, brand names are becoming less influential than they once were, albeit slowly. People from all walks of life, whether they have huge or tiny budgets, are veering away from mass-produced goods.

This struck me recently when we moved house from one part of London to another, from an area known for its proliferation of the seriously rich, some for whom a Porsche is but one of a fleet of vehicles, to an area with prosperous professionals, academics, and people working in the media and visual and literary arts, where a Porsche might be regarded with disdain. Alas, shortly after the move, I broke my right, writing, arm, in the gym.

Yet the fall from fitness grace was an incentive to explore, as I could no longer easily absorb myself in sorting out our several thousand books or in writing; and I felt a little lonesome. I took long walks: ‘good for the blood and healing process’, so the medical experts said.  During my sojourns, I discovered several shops within the vicinity devoted to craftwork, offering related tools, books, patterns, materials and workshops, and sometimes the goods themselves. I also came upon enterprises featuring goods for wholesale and retail that the owners designed and manufactured themselves.

Pursuing craft-oriented hobbies is not necessarily an inexpensive endeavour. Tools and materials for the homemade and handmade can be costly. Individually designed goods are not always for the budget conscious. Increasingly, they are appealing to those who might have once bought Prada but now embrace the distinctively ‘best of Britannia’ and steer away from the globalised, iconic luxury brands.

A recent article in the Guardian revealed that although there are now fewer High Street shoppers, some independent retailers are prospering as they’re trying to create ‘experiences different to the ones consumers can get online or in shopping malls’. This may account for the increase in the number of shops offering make-it-yourself purchases. ‘Fabric shops are up 44% and home baking outlets by 50%, while the number of art and craft shops jumped 29%.’

Moreover, a recent report commissioned by the Crafts Council about the size, value and characteristics of the contemporary craft market in England in 2010 found that there have been ‘significant shifts in consumer demand, towards value centred products, services and experiences which meet emotional – as well as functional – needs. As markets evolve in response to recession and a changing economy, there is a need to understand how these values – and their associated behaviours – may shift and settle into new patterns of consumption relevant to contemporary craft’.

The same report notes that people appreciate ‘increasingly niche, personalised identities: craft is seen as being more personal than design, art and luxury goods’. The findings suggest that, ‘for some people…craft is seen as a desirable embodiment of ethical values’, while ironically, disengaging with traditional luxury goods is also seen by some as a new way to signal connoisseurship. (Maybe luxury goods do not confer, categorically, the status that they did, say, five years ago?) The report also acknowledges the growing popularity of craft activities at festivals and workshops, and of make-your-own kits.

Venturing into the shop called Ray Stitch one discovers a feast of sewing. Tools, accessories, books, materials and specialist kits are beautifully arrayed. Workshops for dressmaking, blackwork (see notes below), patchwork, quilt-making and machine embroidery cater for both the skilled and novices. The owner, Rachel Hart, was inspired to open the business because she lamented ‘the demise of the High Street haberdashery shop’; her modern version offers some organic or environmentally sustainable products and includes a café. On warmer days people sit in the back garden, sewing and drinking cappuccino.

‘Hand-made, home-grown and self-sufficient are not values held only by the “woolly types”,’ Rachel reflects.’Craft is cool now, but more importantly, the busier you are and the more stressful your job, the more you crave a gentle practical pursuit.’ She notes the ‘ high proportion of lawyers who come to our workshops’. Indeed, Rachel has been surprised by ‘the number of men who come in…’ They might be ‘making a quilt, sewing on buttons, making clothes for their kids, for themselves, for their girlfriends. I’m very pleased to see that a shop selling fabric is not off-putting to men’.

A few minutes’ walk away from Ray Stitch one finds the knitting world of Loop, a business established seven years ago by Susan Cropper. She thought it would be a ‘warm, little shop where people would come by once in a while’. But shortly afterwards there was a demand for classes and Susan’s online business boomed. Workshop hosts include Julie Arkell and Juju Vail. In 2010 Loop expanded enormously by moving to four-floor premises in a charming cobbled, pedestrianised lane nearby.

‘We have people who really love the crafts and that comes through,’ says Susan. ‘We have a real mix visiting our classes.’ When I sat in on the Thursday evening knitting group, for people who wish to knit ‘en famille’, I met, among others, a woman who is a valuer at Christie’s, another who worked as a PA at JP Morgan, an American chemistry PhD student at UCLA, and a management consultant. The women certainly didn’t exude a ‘brown rice mentality’, to borrow Susan’s words.

‘No longer,’ Susan tells me, is knitting seen ‘as a domestic craft that belonged to women as a necessity. It has been embraced as a way to be creative, have the joy of the homemade both while making things and living with them. This is a far cry from the Primark throwaway culture’. 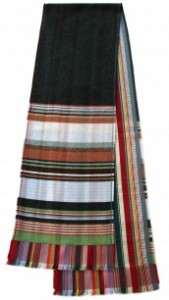 Wallace Sewell is a woven textile enterprise in my new area. For their scarves (selling for £60 to £145 each), shawls, throws, and cushions, they incorporate silk, linen, lambswool, cashmere and crepe to create colourful, bold geometric, strikingly unusual shapes, some patterned. Their creations sell at Tate Modern, the British Museum and Barney’s in New York, among other well-known art establishments and shops. Wallace Sewell has also created moquette fabrics for the seating on London’s overground and underground transport. The studio manager tells me that that ‘we are continually meeting new customers that are fascinated by the fact that we both design and manufacture here in England and we feel that the importance of this is becoming much more acknowledged’.

Equally remarkable is the business of Lie Down I Think I Love You, which designs and manufactures handbags (selling for £300 to £400 each), scarves and shoes, using soft leather and vintage fabrics. They’re proud of their self-proclaimed eccentric designs, which have nostalgic, romantic and retro themes. Co-founder and creative director Emily Trotter finds that ‘we do have a particular customer who likes to seek us out, keeps the label a secret in the fear that she will look like everyone else’.  Trotter notes the changing image of making it yourself: ‘to say you knitted your baby’s cardigan is a badge of honour. The magazines are full of pictures of models knitting backstage. Craft clubs and evenings are popping up everywhere’.

The craft market for makers, sellers and buyers enables people to shape their own material world rather than be moulded by the seemingly insensitive, impersonal corporate world of consumerism. What Susan Loop says about knitting could be reflected in some of the reasons why we have embraced the homemade and hand made: ‘life can be quite scary…these days with random acts of violence, global warming, the economy…something like knitting is a way of slowing down and feeling comfort.’

Are you tempted to try knitting a pullover for your partner?

Blackwork is a form of embroidery using black thread to create intricate, often geometric patterns; hence it may be stitched on an even-weave fabric.  Historically, it was used to adorn linen or cotton caps, collars, cuffs, shirts, chemises and smocks, depicting floral motifs in a repeat design. It has been known at least since the 16th century.  Many sources credit Catharine of Aragon for introducing blackwork to England when she came to England in 1501; then it was referred to as Spanish work. In some instances, both sides of the embroidery are meant to be seen, so it is worked in a double running – ‘Holbein’ – stitch such that the front and back are identical. Differing densities of thread and metallic and coloured threads may be used to create tonal shading.

Moquette is derived from the French word for carpet.  It refers to a plush woven pile with cut or uncut threads, often described as ‘velvety’. The fabric may be made with both natural and synthetic fibres. It is considered extremely hard wearing and well suited for carpets and upholstery in public places. It is ideal for seating in public transport.  One of the only remaining firms producing moquette is Holdsworth in Huddersfield. The company weaves the fabric for Wallace Sewell’s designs for London transport.

This article first appeared in Cassone: The International Online Magazine of Art and Art Books in the February 2013 issue.