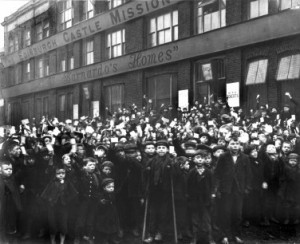 Have you ever dared to doubt the authenticity of a documentary photograph depicting a devastating scene? Wondering if the images of skeletal men and women standing on frozen ground in concentration camps, or a ragged child with a bandaged stump for a leg holding her mother’s hand have been staged is almost as heartless as the actions of the perpetrators of the horrors we see. But there are times when brutal images, while true to an unjust reality, have been contrived, for the sake of fundraising, publicity or propaganda, in the name of a good cause.

Faking photographs – such was the ‘crime’ committed by Dr Tom Barnardo (1845–1905), the man who established care homes, vocational centres, and schools for destitute Victorian children and teenagers. Barnardo was quite comfortable manipulating reality to save the children.

In fact, rather than continue to rely on freelancers, Barnardo eventually opened his own photographic studio in 1874, complete with photographer and assistant, in one of his homes in London’s Stepney Causeway. The studio snapped ‘before’ and ‘after’ photographs of the children he saved to spruce up annual reports, pamphlets and articles. With lantern in hand, Barnardo would ‘catch’ his children at night, finding them as they slept on roofs and doorsteps. He’d take them ‘home’, feed, clothe and put them to bed.

The following day, upon their formal admission, Barnardo would dress the children up – or ‘down’ – as they’d first been found.  The ‘before’ photographs captured the essence of their life before Bernardo – one of maltreatment and malnourishment. And when their health visibly improved the lost souls were photographed again, proving the wondrous transformations Barnardo enabled.  Barnardo sold the images in packs of 20 for five shillings, or singly for sixpence each. As well as raising money from each sale, the photographs carried fundraising copy on their reverse; purchasers were buying his advertisements from him.

Winston Fletcher, in Keeping the Vision Alive, considers Barnardo a ‘pioneer in the use of photography for fundraising purposes’, but his methods ‘landed him a pickle’. In 1877, the Charity Organisation Society publicly rebuked Barnardo for his deceptions, determining that although the images were based on real life, ‘this use of artistic fiction to represent facts is, in our opinion, not only morally wrong as thus employed, but might in the absence of a very strict control, grow into a system of deception to the cause on behalf of which it is practised’. Thereafter Barnardo photographed the children merely for the sake of keeping a record of their lives.  The ‘mug shots’ gave the children a visual link and identity with the past, and helped the children’s families trace them in later years.

You can sense the magnetic power of the images when you visit the Ragged School Museum in Copperfield Road, Tower Hamlets, a borough in the East End of London. The Museum was once one of the few free schools in Victorian times for children from the poorest families in the area, indeed in London. The ‘ragged’ schools catered for children literally in rags, those considered unsuitable pupils by charity and denominational schools on account of their crude manners, filthy state, want of stockings and shoes – the so called ‘undeserving poor’ who belonged in the workhouse.

The Copperfield Road school was started by Dr Barnardo in 1877 in what were once two canal warehouses.  Supposedly, the road was named after Charles Dickens’ autobiographical David Copperfield. Originally, the warehouses had three bays each with double doors on the upper two floors through which goods were hoisted by a ‘wall crane’. Barnardo replaced the doors with windows but retained the wall cranes.  Each floor above ground was transformed into a classroom with a fireplace; the lower ground floors were turned into covered playgrounds. The walls were painted with primrose yellow and chocolate brown. A small pediment was added to the front parapet to give the school a touch of grandeur, a sense of importance.

In the beginning the average daily attendance was 106 boys, 100 girls and 70 infants. There were four teachers and six monitors. There was a Sunday School with 33 volunteer teachers, attended by 1,500 children. Boys and girls were taught separately. Within 20 years, the 1896 Annual Report noted 1,075 day school children and 2,460 Sunday School children in attendance. At  Copperfield Road, unlike many other ‘ragged’ schools, children who were too cold or hungry to learn were also given breakfast and dinner in the winter. Some were given boots and ‘old garments’ to replace the rags. ‘We find, in many cases,’ wrote Dr Barnardo, ‘that food is more essential to the boys and girls than education’.

In 1895, overcrowding forced Dr Barnardo to lease an adjacent warehouse from a lime juice merchant. But eventually school government authorities came to regard the accommodation as appallingly below standard, especially the ceiling heights; in 1908, the day schools were closed, although evening classes and Sunday School continued to be held at Copperfield Road until 1916.

From 1916 until 1984, the buildings were used consecutively by clothing manufacturers, rag merchants (they sold rags to paper mills and textile firms in the north of England), furniture makers, linen dealers, and for government surplus. They would have been demolished to enable an extension to Mile End Park, but a case was made for retaining two of them as a museum about the East End and Dr Barnardo’s philanthropic work. Charitable donations enabled their sensitive conversion for public use. The Museum opened in 1990. Its three patrons are fashion designer Bruce Oldfield (a former Dr Barnardo’s ‘old boy’ who has dressed Princess Diana and Catherine Zeta-Jones amongst others), historian Asa Briggs and Dame Gillian Wagner.

The historical artefacts, pictures and explanatory panels displayed in the galleries are extremely evocative as a whole because of the severe, impoverished reality they portray.  Although there’s a startling lack of the aesthetic references and pretensions that we take for granted, the simplicity of the concrete, and the expressive faces of the people we encounter in the images stir our senses.

We sit in an authentic Victorian classroom, complete with wooden floors and school desks, with dip pens, ink bottles and wells, and a slate blackboard, where last year some 16,000 children from 300 schools (out of over 23,000 visitors in all) experienced a school lesson as it would have been given over 100 years ago (actors dressed in Victorian costume play the roles of the teachers). The classroom is a popular location for film and television shoots. There’s also a reconstructed Victorian East End kitchen that allows for hands-on inspection. Children are ‘taught’ to wash clothes in a tin bath and iron with flat irons.

The East End is where ships berthed, bringing goods from all over the world. It is also where waves of mostly poor immigrants first disembarked – a sizzling pot of people of all nations, creeds and religions, trades and industries. During Victorian times, wretched poverty was rampant, characterised by tumbledown tenements, low-ceilinged hovels, inadequate sanitation, and criminality including widespread prostitution. The poor found intermittent work as dockers and hawkers, some selling manure for dressing leather, for example. Such might be the occupations of the parents of Dr Barnardo’s children.

Generally the term ‘the East End’ refers to the areas within the boundaries of the London Borough of Tower Hamlets, but originally Tower Hamlets covered a larger area.  ‘Tower Hamlets’ refers to the small settlements east of the Tower of London whose men defended the Tower. The Tower has been a fortress, palace, prison, arsenal, menagerie and a Royal Mint. The areas of Whitechapel and Spitalfields are well known for the textile industries that burgeoned within them when the silk weaving French Huguenots arrived in the 17th century, and the Eastern European tailors arrived in the 19th centuries. William Booth, the evangelical Christian who founded the Salvation Army, was active in the area. Bethnal Green is well known for the underground station disaster (173 people fleeing a possible bomb attack were suffocated or crushed) during the Second World War, and the popular working-class sport of boxing.  Sylvia Pankhurst, the suffragette who fought to give women the vote, lived for a while in the area of Bow. The Thames River Police, the world’s first police force, was established in 1798 in the area of Wapping.

The East End of today is undergoing radical change. Financial companies are migrating to the region; trendy markets and shops – featuring organic food products, innovative craftwork and clothing – galleries, chic cafes and restaurants are mushrooming. Gentrification flourishes.  Were he alive today, Barnardo would be intrigued, though he’d still encounter extreme poverty, high unemployment, inadequate housing and infrastructure, child abuse and neglect. What’s different between now and then is that we officially recognise and attempt to remedy the plight of the unfortunate; and we use art not only as a means of publicity but as a life-changing tool of enrichment. Young people are learning to take the pictures.

For information about opening hours of the museum and educational activities, please refer to www.raggedschoolmusseum.org.uk.

This article first appeared in Cassone: The International Online Magazine of Art and Art Books in the April 2013 issue.