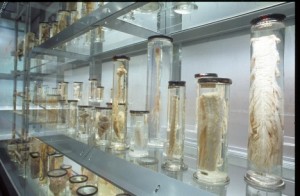 The Hunterian Museum at the Royal College of Surgeons is a fascinating tribute to the complementary relationship between the arts and sciences. Visiting is both a visual and learning experience; and the raison d’etre of the subject matter, the development of surgery and its effect on our health, concerns us all.

Popular culture and higher education reinforce the view that the arts and sciences exist on opposite sides of a vast divide. School-age children are presumed to have predilections for either arts or sciences. But there is scant evidence of this spurious dichotomy if we look back in history. Until relatively recently, scholastic education and life-long learning involved both the arts and sciences. Concentration didn’t entail exclusion – the arts and sciences were integrated, complimentary, harmonious rather than discordant.

Michelangelo’s depiction of God Creating Adam, on the ceiling of the Sistine Chapel, has been interpreted as an anatomical illustration (based on Michelangelo’s own recently discovered anatomical drawings) of the human brain in cross section. Anatomical drawings, such as those by Vesalius, may have influenced the way Renaissance painters portrayed their subjects. Goethe was an accomplished novelist, dramatist, poet, philosopher, scientist and natural scientist. In the 19th century, educated people attended lectures and read about scientific as well as artistic subjects.

The division between art and science probably began in the early 20th century when one began to need an overwhelming knowledge of facts and theories in order to specialise.  Would there be time to grasp other fields of enquiry? Nonetheless, such a divide is unrealistic.

Art can be used conceptually to highlight the perils of disease and communicate scientific concepts. The exhibition Medicine Now (in 2013) at the Wellcome Collection considers medical topics through the eyes of artists, scientists and patients. John Isaacs’ multimedia sculpture, I cannot help the way I feel, of a body engulfed by bulbous blobs of flesh, reveals how incapacitating obesity can be and conveys how sufferers feel.

African-American woman astronaut, Mae Jamison, a doctor and chemical engineer as well as a professional dancer and choreographer, champions the link between the arts and sciences. After serving in the Peace Corps as a Medical Officer, Jamison joined NASA’s space programme.‘Science provides an understanding of a universal experience. Arts provide a universal understanding of a personal experience,’ believes Jamison.

In London’s Hunterian  Museum, we view a collection of human and animal anatomical specimens amassed during the 18th century by the surgeon and anatomist John Hunter (1728–93). Hunter learned his craft while working as a surgical apprentice and a military surgeon. He served as a Surgeon Extraordinary to King George III.  In the Crystal Gallery – eight, floor to ceiling cases – there are over 3000 ‘preparations’ including the human and animal remains of healthy and pathological anatomical structures and those affected by injury and surgical repair. Others reveal animal regeneration and transplantation, such as a specimen of a healthy human tooth grafted into the comb of a cockerel’s head.  Hunter’s animal specimens were obtained from casualties at the Royal Menagerie, the menagerie at his country house (which included leopards and bulls) and friends’ discoveries, such as those given by the naturalist Joseph Banks. (Banks accompanied Captain Cook on his first voyage.) Hunter used the preparations as teaching tools, and encouraged his students to undertake systematic dissections.

Bodies for dissection were hard to come by before the middle of the 18th century. This situation eased somewhat as a result of the Murder Act of 1752 which allowed bodies of convicted criminals to be used for dissection, and the fact that in the interest of furthering advances in medical science, the authorities were increasingly willing to overlook the none too proper ‘donations’ of grave diggers and body snatchers. The Anatomy Act of 1832 allowed the use of unclaimed bodies, paupers from the workhouses, for example, for dissection. Hunter also obtained bodies from St George’s Hospital where he’d been elected as a surgeon. Wealthy private patients sometimes consented to having their cadavers used for dissection.

Once extracted, Hunter’s specimens were stored in the glass jars, preserved in alcohol or oil of turpentine. The tops were sealed with pig’s bladder, tin and lead and painted over with pitch. Hunter also made specimens by varnishing dried out soft tissue and bones. The delicate and intricate formations of the small, jam jar sized specimens, with their ivory and soft pastel coloured exteriors, are aesthetically pleasing to many. Indeed, we learn that anatomical models in ivory and other materials have not always been just for medical study. In the 16th and 17th centuries they were treasured as beautiful objects ‘with moral purposes as memento mori to remind the wealthy of the inevitability of death’. Hans Sloane, who helped to found the British Museum, included over 700 anatomical preparations in his collection of antiquities, coins and natural history objects.

Hunter and his wife, Anne, an accomplished poet  (the composer Joseph Haydn set some of her poems to music) were very interested in art. Through Anne the couple befriended many writers, such as James Boswell, and artists of the time. Joshua Reynolds, a family friend, painted Hunter’s portrait in 1786. In this vein, it’s not surprising that there’s a gallery in the Museum devoted to paintings and drawings associated with surgical subjects, proving how the arts can familiarise the public with medical subjects.

A picture by an unknown artist shows an unusual medical condition known as piebaldism, a genetic condition causing a lack of pigmentation in some parts of the skin and hair suffered by the subject, Mary Sabina. An oil painting by Barbara Hepworth, Concourse, 1948, reveals a surgical team at work. Rounded body shapes, gentle tones of blue and yellow, enhanced with slim streaks of light, create feelings of calm and congenial cooperation, ‘concentration and rhythm’ according to Hepworth. The work embodies the idea of social cohesion, underpinned in the social reforms of the post war era, such as the establishment of the National Health Service. As a result of Hepworth’s friendship with the surgeon Norman Capener, developed while he was treating her daughter, Sarah, for osteomyelitis, she was invited to observe operations.

Within an exhibit devoted to the development of plastic surgery, we find copies of Henry Tonks’ pastel portraits of a soldier before and after his severely injured mouth had been reconstructed by the plastic surgeon Harold Gillies. Tonks was both a qualified surgeon and an accomplished artist who became Professor of Fine Art at the Slade School of Fine Art. Tonks collaborated with Gillies to produce detailed drawings of sequences of operations: incisions, implants and grafts. Tonks, like some surgeons before him, was a fine draughtsman.

It’s encouraging to discover that both the Central Saint Martin’s College of Art and Design and the Cardiff School of Art and Design are offering postgraduate programmes combining art and science. Hunter would never have sanctioned the divide.

The Hunterian traces the cutting edge of history: how surgery has developed from being a craft to a clinical science, beginning in the days when barbers were distinguished from surgeons only in that surgeons –‘leeches’ – were permitted to carry out blood letting (by applying leeches, a heated cup over scarified tissue, or cutting open a vein). A recent book about its history published by the Royal College  of Surgeons in England tells of the political manoeuvring involved in its establishment in 1800 and its vital role in the provision and examination of medical education and resources for medical research. Scientific discoveries enabled huge advances in heath care and recovery. The discovery and use of anaesthetics allowed more time for open and as well as minimally invasive surgery, the development of antiseptic techniques, including sterilisation  helped to reduce the number of deaths caused by infections, and a greater understanding of haemostasis (how to stop bleeding) helped to curtail the incidence of death from haemorrhaging.

Fiction involves surgery too. Pat Barker’s, Life Class (2007), is a compelling, fictionalised account of Henry Tonks and the students with whom he worked at the Slade School of Fine Art, before and during the First World War. The young artists (two are possibly based on Paul Nash and Dora Carrington) respond to the war in quite contrasting and not necessarily altruistic ways. Toby’s Room, which follows (2012), also includes a fictionalised Henry Tonks and life at the Slade during the period of the First World War.

For information about opening hours of the museum, please visit
www.hunterianmuseum.org.

Photograph of the contents of the Crystal Gallery at the museum courtesy of the Hunterian Collection, the Royal College of Surgeons.

This article first appeared in Cassone: The International Online Arts Magazine of Art and Art Books in the April 2013 issue.