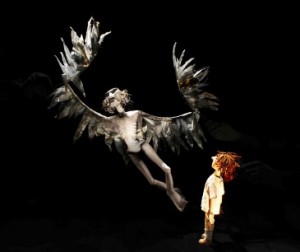 At the most unusual church service I’ve ever attended we thanked the Lord ‘for the beauty of the arts, for drama, dance and music, for the skill of the puppeteer…’ The service took place at St Paul’s church in London’s Covent Garden, known as ‘the actors’ church’ because of its established association with the local theatre community. A brass band followed by puppeteers holding their puppets joined the altar procession. The Rector, Simon Grigg (a former actor and theatre director), invited the puppeteers with puppets sitting in the pews to come to the altar for a blessing. The service marked the occasion of the Mayre Fare, an annual feast of Punch and Judy puppet shows and food and craft stalls held outside in the church gardens.

The spiritual blessing is well deserved, for puppetry embraces so much of artistic creation  – painting and sculpture; craftwork, including carpentry, sewing and embroidery; the performing arts, with dance, drama, choreography, music; and the literary arts, both poetry and prose.

Moreover, puppetry is an inspiring means of communication, especially visually.  Indeed, the distinguishing factor between a puppet and a doll or statue is that the puppet is created so that it can be manipulated to form part of a narrative, relate to a world outside its own individual sphere, whereas dolls and statues are not characteristically and necessarily meant to communicate.

Unfortunately, puppetry is not always as appreciated, especially in the West, as it should be, perhaps because many puppet productions here are created for children’s entertainment. Hence, adults do not always take puppetry seriously as a sophisticated art form, a pleasure for a lifetime. 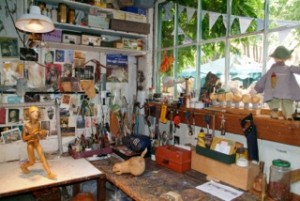 My reflections came to life when my son, Tom, and I recently visited the Little Angel Theatre, one of the most notable and well-established theatres in Britain devoted to the art of puppetry. The occasion reminded us of one of Tom’s childhood parties where a mesmerizing professional puppeteer staged a Punch and Judy Show in the drawing room. And equally, if not more, enthralling was what we saw at the Angel: We’re Going on a Bear Hunt, a production based on a children’s story written by Michael Rosen and illustrated by Helen Oxenbury, which was adapted by the theatre’s previous artistic director, Peter Glanville. Unusually the puppeteers were also very much part of the production, acting, singing and playing musical instruments: the guitar, ukulele, flute and trombone. (Traditionally, the puppeteers are hidden from the audience.)

In the play, three puppeteers, visible although dressed in navy so that they blended in with the dark background, manipulated the puppets, one moving the legs, one manipulating the head and an arm, while another controlled the other arm. The latter two puppeteers may use rods for control.  This style of presentation is similar to that of the Vietnamese and Japanese puppetry genre known as Bunraku.  After the play, we went on a tour backstage and in the workshops, where a woodcarving course for making puppets was being held.

The Little Angel Theatre is also a major centre for professional puppetry development, featuring courses in construction, performance and stage lighting, for instance. It collaborates with the Central School of Speech and Drama, which offers a first degree in puppet making and performance. Its FIRSTS festival supports emerging companies. The theatre also encourages amateur puppeteers, of all ages, with courses and workshops.

Adult audiences are drawn to SUSPENSE, a biennial puppetry festival, sponsored by the theatre, held in 11 venues across the UK.  Puppeteers from all over the world participate.  The festival has included an Iranian adaptation of Lorca’s The House of Bernarda Alba, where the faces of the puppeteers were covered with white muslin embroidered with black crosses and coloured stitches suggestive of scars; and the heads were shrouded with white-rimmed black material reminiscent of wimples. In another production a life-sized puppet of a dying woman captured the vulnerability of people cared for by strangers during the last days of their lives.

The Little Angel has a romantic beginning. When she was a little girl growing up in Pretoria, South Africa, co-Founder Lyndie Wright recalls seeing a performance by a touring puppet company. The company’s return years later afforded Lyndie the opportunity to join the group as a general dogsbody and then to fall in love with John Wright, the company’s director, a much older man. When Lyndie moved to London to study art, John followed.

In 1961, together John and Lyndie established a puppet theatre in a run-down temperance hall in Islington where trees flourished in the main space; there was no roof. The Wrights lived in the tiny adjacent cottage. Their two children helped to run the business. Joe, their son, went on to study art and drama and later became a film director; his first feature film was Pride and Prejudice (2005). As Sarah didn’t wish to take over the Little Angel, Lyndie donated it to a charitable trust. Both women are still closely involved in the Theatre; it was Lyndie who helped design and make the puppets for Bear Hunt.

The Little Angel Theatre uses every type of puppet; productions and their presentations are inspired by stories from an eclectic range of cultural traditions, stemming from possibly 4000 to 5000 years ago when Middle Eastern civilizations were creating figures with moveable heads, legs and tails. Blumenthal reveals that the earliest record of a performing puppet dates from about 2000 BC and originates from the Nile Basin. She speculates that sub- Saharan Africa may have inherited puppetry traditions from Ancient Egypt. Ancient texts refer to puppets performing for entertainment a well as for ceremonies in Hellenic times.

Puppetry, especially shadow puppetry, has been extremely popular among both adults and children in South and East Asian countries for centuries. Northern Vietnam is acclaimed for its traditional water puppetry, whereby lightweight wooden puppets, painted with waterproof pigments, perform in waist-high pools or lakes. Puppeteers, hidden by a bamboo screen, control the puppets with a large rod held under water. The puppets ‘walk’ on water.  There’s evidence of puppetry in Central America dating back to the first century AD and that Native Americans used ceremonial puppets in the 16th century.

In Europe puppets performed morality plays and enacted biblical stories for entertainment and education, especially during the Middle Ages. The Commedia dell’arte, originating in Italy, gave birth to the tradition of Punch and Judy puppet shows, which became popular throughout Europe from the 16th century onwards. Puppetry in Eastern Europe can be traced back to the early Middle Ages. Haydn, Mozart and Bach composed operas with marionettes for court circles.

In America, in the 20th century, the use of puppetry in television, notably Jim Hensen’s Muppets, helped to spread the popularity of puppetry. One of the most well-known puppet theatres, the Bread and Puppet, established by Peter Schumann, is in Glover, Vermont, where there’s also a museum of puppetry. The appeal of puppetry in the West has also been strengthened by the musical production War Horse, with its breathing, galloping, life-size horses, made with steel, leather and aircraft cables, and by the British futuristic children’s television series, Thunderbirds, with its marionettes.

Especially since the 20th century, visual artists have demonstrated an affinity with puppetry, as it allows for individualistic control and creation. Paul Klee designed a hand-puppet theatre for his son. Alexander Calder built a miniature circus with characters such as clowns, weight lifters and tightrope walkers made with wire, wood, cork and metal and gave solo performances with his creation. Picasso and Matisse created puppets for Diaghilev’s Ballets Russes. The Bauhaus workshops also experimented with puppetry. The sculptor and painter William Simmonds, prominent in the Arts and Crafts movement, staged puppet shows in London with his carved wooden marionettes. His wife played the music on virginals.

Throughout history puppets have been used in challenging political contexts, articulating what human beings fear expressing because they might be ostracized, or imprisoned. Can you put a glove-like piece of fabric behind bars? And, uncannily, operators are not always blamed for a puppet’s outspokenness.   Punch has been portrayed as an English soldier hanging Hitler, for example. During the 1980s and 1990s, the television show, Spitting Image, featured puppet caricatures of politicians such as Margaret Thatcher and members of her cabinet, opposition party members and international politicians such as Ronald Reagan. Russians talked about potatoes; and I dare not say any more!  For a Central American tour, The Bread and Puppet Theatre created an enormous figure of Archbishop Oscar Romero of El Salvador, who championed the poor despite threats from right wing death squads. During one of The Little Angel’s SUSPENSE festivals, a symposium explored the relationship between puppetry and politics.

‘With puppetry,’ as puppeteer Lowri James says, ‘ships can sink on stage, birds can fly through the theatre, a man can fall 40 floors from a tall building, anything is possible.’ Such magic is puppetry.

Marionettes are controlled from above with rods, wire or strings, attached to the head, a limb or two, or possibly every limb, requiring more than one operator. The materials used in the making must be neither too light, or else the puppeteer may not feel the movement, nor too heavy for the puppeteer’s arms to control gracefully. Wood and paper maché are commonly used. The strings may be gathered on a wooden ‘crutch’ or control, held in one hand by the manipulator who plucks at whatever strings are required with his other hand. Glove or hand puppets enable puppets to be moved from below with the hands and fingers. The legs, if any, dangle and swing. Rod puppets, held from below, usually do not bend. The rods may run through the puppet’s body and be attached to one or more limbs. Shadow puppetry involves a strong light and a translucent screen. Spectators see the puppets’ shadows passing across the screen. The performance area is shrouded in darkness. But, in reality, as puppeteer Lowri James explains, ‘anything can be a puppet: a shoe, a piece of paper, anything that’s animated and given life’.

This article first appeared in Cassone: The International Online Magazine of Art and Art Books in the September 2013 issue.