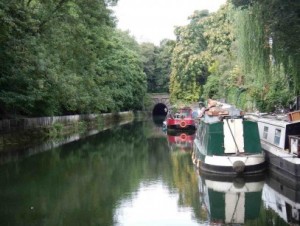 The gently meandering canal, a man-made waterway, is assuredly level; personified, it would be described as placid, even-keeled. Its still waters never threaten; no hurricanes or brutal waves charge its depths. Shipwrecks, pirates, burning battle decks – they are the province of rivers, seas and oceans. The boats weaving through the canal’s course, since its creation, are patient; speed is anathema.

Yet if the canals could tell stories, they would reveal much about the social and cultural heritage of the countries through which they run. We’d learn about civil engineering; think of the bridges and locks the canals necessitated. We’d consider geography by the way the canals have been negotiated to flow through the land, and vernacular architecture – the factories, warehouses, pubs and two-up, two-down lock-keepers’ cottages that grew up near the waterways. The dawning of industrialisation, canal boat construction and the very distinctive canal folk art are other aspects the stories would feature. And canals have always been and always will be very much part of the aesthetics of the landscape, as Constable appreciated in The Lock and Turner portrayed in Chichester Canal.

As I now live very close to London’s Regent’s Canal and walk along it frequently, I was interested to learn more about the contribution canals have made and still make to our lives. I visited the London Canal Museum, appropriately located near the Regent’s Canal. The building was built about 1800 as an ice warehouse for Carlo Gatti, an ice importer, restaurateur and ice cream maker. Ice was transported to this site by boat along the canal. (There are exhibits about the ice trade.)

The Museum explores the history of Britain’s and specifically London’s canals through subject-based exhibits, and archive film footage. We experience how cramped the living conditions of the canal boat were – the freight carried took pride of place – by walking around the partly constructed cabin of the Coronis. The boats – called narrow boats – would be just over two metres or seven feet wide and at most 21 metres or 70 feet long, to ensure that they could pass through the locks, tunnels and aqueducts. The cabins were about three metres or ten feet long, and roughly just over one and half metres or five feet high. The lavatory was a bucket; the beds (also providing seating) were fixed along the sides; lockers lived under the bed. A cupboard door served as a folding table.  The boats were initially pulled by a horse, led by a crew member, and later powered by diesel or steam.

We see inside a Toll Office. In order to journey through the waterways, boats were obliged to pay tolls, which were levied according to the weight and type of cargo carried. Cargo-handling tools, how locks work and the role of horses in canal transport are the subjects of other displays.  I was privileged to see a temporary exhibition of black and white photographs of the folk who lived and worked on the Oxford and Coventry canals during the 1940s and 50s, taken by Robert Longden (1879–1957), a Coventry factory worker. The poignant, intimate images revealed the harsh reality of the people’s lives. A well-stocked bookshop and friendly volunteer staff help the canal enthusiast learn more.

The origin of canals is slightly obscure, suggests George Westall in his book Inland Cruising, but it’s widely considered that the ancient Egyptians, Greeks and Romans constructed watercourses as channels for irrigation and navigation. ‘Later, China, India, and, in course of time the countries of Europe constructed and utilised canals for purposes of both irrigation and navigation.’ In Britain the Romans built the Fossdyke from Lincoln to the River Trent. The Exeter Canal was a noteworthy early waterway finished in 1566.

One factor encouraging the great age of canal building was that packhorse passage was inefficient, strenuous and dangerous – think of the highwaymen lurking behind the hedgerows. In winter the highways were ‘mere quagmires’ and in summer soil and dust prevailed in great quantities. Heavy traction was laborious. The prospect of a less costly and more efficient transport scheme would have had great appeal. The packhorse could carry only perhaps a few hundred pounds, a draught horse could haul a wagon filled with three tons, while a canal boat could transport 25 to 30 tons of freight pulled by the power of one horse.

The Bridgewater Canal, which opened in 1761, was the catalyst for canal building mania. Credit for the initiative goes to Francis Egerton, the third Duke of Bridgewater who was inspired by the Canal du Midi in France. He wanted to find a way to facilitate the passage of the coal from his collieries at Worsley to Manchester. His success halved the price of coal in Manchester.

The engineering of the canal was the result of collaboration between the Duke’s agent, John Gilbert, and a millwright, James Brindley. It was Brindley’s ideas that prevailed in the early years of canals, enabling the development of a chain of such waterways forming a network of communication throughout Britain. Main ‘lines’ linked the four largest rivers, the Thames, Mersey, Severn and Trent, with warehouses, wharves and basins being built alongside the waterways. The Trent and Mersey Canal was strongly and openly encouraged by pottery owner, Josiah Wedgwood, who was looking for an inexpensive, efficient, smooth and safe means of distributing his ceramics. His goods were sometimes cracked or broken when they were transported by road. 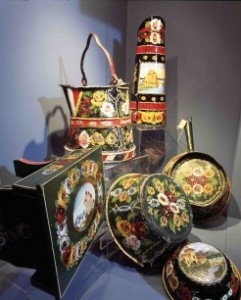 The Museum exhibits to which I am most drawn are those about canal folk art, commonly referred to as ‘Roses and Castles’, which dates from the mid 19th century. At that time the great days of the canal boat transport industry started to decline and boatmen began to live afloat with their families. This was more economic than working the canals on their own and maintaining a land-based family and home.  Returns and wages were starting to fall. The family could work as the crew.

It is likely that traditional canal boat art was inspired by the decorative ware of the Midlands and possibly by Japanning, which was also an established Midlands industry. There is some speculation that it was inspired by the brightly decorated gypsy caravans, but this is unlikely given that there is no evidence linking the lives and blood of the boat people and gypsies.

Phil Speight, a notable boat painter and canal folk-art teacher and lecturer, considers the craft ‘very much a male province’. In the context of the times in which the art took hold, the bold colours, geometric patterns and lozenge shapes, and simple landscape, riverscape, pastoral, floral and architectural images were by no means delicate or subtle, and often without a sense of perspective. The women embroidered, crocheted and sewed; the men painted. While this blatantly stereotyped image may seem insensitive and even offensive to us it could very well have been a reality for the boat people.

Above all, the art work was, as Tony Lewery, another respected canal folk art authority comments, ‘a proclamation of self-esteem, and mark of membership of an exclusive trade elite…This art satisfied a cultural need for several generations of the boat population who, because of their insularity and illiteracy [poverty and their relatively itinerant life meant they did not go to school], remained largely unaffected by academic fine art teaching or the vagaries of fashionable taste’.

The various structural components of the boat, for example the cabin sides and roof, would be painted in vibrant, contrasting colours such as red, yellow, blue. The visual effect might be quite dazzling. Individual designs would embellish the ‘blocks’ of painted areas, on the boat’s exterior and cabin interior. One might see patterns of diamonds, hearts or clubs from playing cards or pictures of the playing cards themselves (spades were considered a bad omen); flowers such as roses and daisies; castles, manor houses and thatched cottages with clear blue skies above and rolling hills in the distance; and animals grazing.  The idealised images would never disturb.

Though the ways of life of the boat people have joined the annals of history, fortunately the brightly painted canal boats are not yet quaint relics of the past.  These homes are being restored and their crafts revived by skilled enthusiasts. Travelling along the canals is for the most part a leisurely pursuit, though some owners have established cafes and businesses selling local produce, such as cheese and ice cream. Ramblers such as myself amble along the towpaths, pick blackberries, and contemplate the aesthetics of the waterway. Ribbons of gold.

The principle of canal design is aptly expressed by author George Westall in Inland Cruising on the Rivers and Canals of England and Wales (1908), who likens it to the ‘passages of a large house with a giant stairway giving access to the topmost story, the risers representing locks and the treads elongated ponds… with reservoirs above the roof and on the landings from which water gravitates to the lower levels’.

A lock is a section of the canal or ‘chamber’, closed off with gates; boats in transit are raised or lowered by raising or lowering the water within that section. The lock enables the water level on one side to ‘match’ the water level on the other, so that vessels can flow smoothly across land that is not level. A boat going upstream first enters the lock, then the lower gates are closed. The lock fills with water from upstream until the water level matches that in the higher part of the canal. The upper gates are opened and the boat leaves the lock.
The first waterways were characterised by having ‘flash’ – single gate – locks whereby boats were carried downstream on a rush of water, and directed upstream by floating on the torrent released by opening the gate. The subsequent invention of the double-gated vertical lifting lock was considered less hazardous. Today, the double-gated lock widely used all over the world is the mitre; its invention is attributed to Leonardo Da Vinci. The two leaf gates, each more than half as wide as the chamber, swing on vertical hinges. When open they are flush with the lock’s walls. When closed they meet in a ‘V’ position pointing upstream such that the higher water level presses against them ensuring a water tight seal. Valves or pumps allow water to be drained into or out of the chamber.
Photograph of Regent’s Canal by Stephen Kingsley. Photograph of traditional canalware made by barge dwellers, courtesy of the London Canal Museum.
This article fist appeared in Cassone: The International Online Magazine of Art and Art Books in the October 2013 issue.