Recently, I saw a play about Elizabeth Siddal (1829–62), a poet. artist and the Pre-Raphaelite artists’ model. The art critic John Ruskin compared her work to that of her contemporaries J.M.W. Turner and G. F. Watts. But despite opportunities to study and exhibit, Siddal remained in the shadow of such men. Ill health and a disheartening relationship with Dante Gabriel Rossetti overwhelmed her. She lacked the benefit of a supportive, prosperous, cultured family or the camaraderie of established female artists. Siddal’s father sold knives and forks. For a while she earned her living working in a milliner’s shop.

Aspects of Siddal’s story reflect those of many female artists of the quite recent and not-so-recent past. Admittedly, though, from the Renaissance onwards it did become possible for some women to identify themselves as artists. Nonetheless, this was an extremely hard triumph to achieve.

Economic, political and legal inequality between the sexes, sustained by prevailing cultural norms, served to thwart Renaissance women from pursuing artistic careers; there were few stars. Other reasons for their obscurity are lack of documentation and evidence; for example, despite documented references to a woman’s oeuvre, it may be that little, if any, of her work can be found.  Another factor is incorrect attribution to a male artist, be he a relative or mentor, in order to retain the value of the work or hide the fact that the ‘Master’ commissioned did not create the work himself. For instance, some of the paintings attributed to the Venetian painter Tintoretto could have been painted by Marietta Robusti (1552/60–90), his daughter. She trained with her father and was a highly esteemed portrait painter. Until quite late in the 20th century the tendency to preserve the status quo within art history education curricula has also discouraged reclaiming women artists from Renaissance history.

Furthermore, female Renaissance artists were automatically disadvantaged as there were no overt opportunities for them to study the nude. Representations of the human form, clothed and unclothed, were central to Renaissance art. Some women attempted to overcome this barrier by ‘copying’ while others concentrated on producing miniatures, portraits and self-portraits.

Nonetheless, there were women during the Renaissance who shared the artistic realm with men, usually because they were encouraged, mostly for economic reasons, to develop their skills by a male relative or family friend who was also an artist. In their cloistered milieu nuns might be encouraged to nurture their talent. But, always, as a ‘proviso’, the ‘chosen’ had to be seen as virtuous as well as personable, reasonably educated, possibly musically gifted, and of good pedigree. While the women artists inhabited the domestic, courtly or religious domain, men marketed their work in the public sphere. Overt aggression would get a woman nowhere.

An account of Siddal’s Renaissance predecessors, mostly Italian, would include the nun Caterina de’ Vigri (1413–63), the daughter of a Ferrarese gentleman.  She might have remained behind the veil were it not for her sainthood. The grave and paintings of this patron saint of painters became objects of pilgrimages. Germaine Greer in her book, The Obstacle Race – The Fortunes of Women Painters and their Works, notes that according to Caterina de’ Vigri’s biographer, Sister Illuminata Bembo, ‘she loved to paint the Divine Word as a babe in swaddling bands, and for many monasteries in Ferrara and for books she painted him thus in miniature’. Still, identifying her work is difficult. Vigri, says art historian Whitney Chadwick, in Women, Art and Society, is a prime example ‘of learning and culture by women in convents’. Another noteworthy nun is the Florentine Dominican Sister Plautilla Nelli (1523–87), the daughter of the painter Lucca Nelli. Although Giorgio Vasari, an artist also known as the first art historian, reported that Nelli made many paintings for both religious establishments and the homes of Florentine gentlemen, few of her paintings and drawings survive.

Properzia de’ Rossi (c1490?–1530) is a rare Renaissance phenomenon. She succeeded in winning a commission to provide sculptures for the façade of the Basilica of San Petronio in Bologna, having carried out work for another city church. Initially she was a pupil of the respected engraver Marcantonio Raimondi. Vasari notes that the citizens and artists of Bologna rejoiced in her talent. Rossi was also hailed for her extraordinary carvings on very small surfaces, including peach and plum stones. Vasari considered them ‘singular and marvellous to behold’.

Irene di Spilimbergo (1540–59) was born into a noble Venetian family. Her fellow Venetian artist Titian apparently was so captivated by her beauty and talent that he painted her portrait and took her on as his student. Diana Scultori (c.1547–1612) was trained to engrave by her father, Giovanni Battista Mantuano. Her engraving was ‘a thing to marvel at’, believed Vasari. Barbara Longhi (1552–1638) was the daughter of the Mannerist painter Luca Longhi of Ravenna, to whom some of her work is still questionably attributed. At an early age she produced small works of religious themes – the Virgin Mary, saints and scenes of the Holy Family – for use during the private prayer of local patrons. These were painted with ‘with considerable good grace and style,’ commented Vasari. Later she painted larger works. Her work features in national and international museums.

Milanese-born Fede Galizia (c.1574–c.1630) was praised for her achievements as a copyist, draughtswoman and portraitist. Her father, Nunzio, was an esteemed illuminator.  She was revered for her atmospheric and productive output of still lifes, and regarded as an important figure in the development of still-life painting in Italy.

Levina Teerlinc (1510/20–76) and Caterina van Hemessen (1528– c.87) are the most noted Northern European Renaissance female painters. Bruges-born Teerlinc was the eldest of five daughters of the miniaturist and book illuminator Simon Benninck. Initially she assisted him with illuminations. Few works are assuredly identified as hers although there must be a body of work produced by her as she was so well known as a miniaturist in the 16th century. Indeed, she served as a court painter for King Henry VIII, King Edward VI, Queen Mary I and Queen Elizabeth I, and was paid more for her miniatures than Hans Holbein was paid for his court paintings. Her ‘real successor’, assesses Elsa Honig Fine in Women and Art – A History of Women Painters and Sculptors fro the Renaissance to the 20th Century, was the now rather more famous Nicholas Hilliard. Caterina was the daughter of the Antwerp Mannerist Jan van Hemessen. Fine comments on her ‘skill in capturing the quality of her sitters’ personalities’. She also produced religious paintings. Caterina married ‘a gentleman of breeding’, an organist at Antwerp Cathedral. The couple lived in Spain for a period while Caterina served as court painter to Queen Mary of Hungary after the latter had abdicated her regency of the Netherlands. 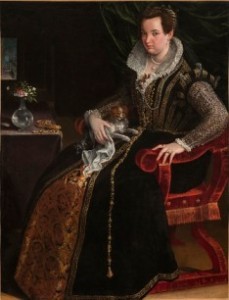 The two most prominent stars of the Renaissance are Sofonisba Anguissola (1532–1625) and Lavinia Fontana. One might consider them ‘greats’. Anguissola was born into a noble Cremonese family and was the eldest of six sisters and one brother, all of whom were painters. (Sofonisba’s sister, Lucia, also achieved fame for her paintings. There are pictures by her hand, wrote Vasari, ‘that are no less beautiful and precious than those of her sister’.) Although Amilcare, their father, was not an artist, he encouraged his daughters’ artistic potential. Their first drawing master was Bernardino Campi, a Mannerist painter, and later Bernardino Gatti, a follower of Correggio.

Sofonisba was regarded as a child prodigy. One of her most widely reproduced drawings Boy Pinched by a Crayfish may have been the inspiration for Caravaggio’s Boy Bitten by a Lizard. Vasari commended her ‘rare and beautiful paintings’. Her portraits have a sense of warmth and unpretentiousness, rather than appearing as majestic and imposing; and her self-portraits are spirited and candid. For several years Anguissola was court painter to Philip II of Spain.  Elsa Honig Fine considers her the ‘first woman artist to achieve international renown, and the first for whom a large body of work is still extant’.

Lavinia Fontana (1552–1614) was the daughter of the Bolognese painter, Prospero Fontana. Her early self-portraits and small panels for private devotional pieces reveal the naturalism of Raphael and the elegance of Correggio. She depicted costume and jewellery with painstaking detail. While famed for her portraits, Lavinia was also revered for her religious and historical paintings including large altarpieces, some of which incorporate domestic motifs, such as in the Birth of the Virgin.

Her marriage to Gian Paolo Zappi in 1577 was contracted on the basis that the couple remain as part of her father’s household, so that Lavinia’s artistic career could continue. Her husband assisted her by painting backgrounds and draperies and by caring for their family. In 1603, she moved to Rome with her immediate family in accordance with the wishes of Pope Clement VIII. Fontana’s work was in great demand. Her fees were as high as those commanded by Van Dyke. She was elected to the Accademia di San Luca in Rome (San Luca – Saint Luke – being a patron saint of painters).

There were more women artists working during the Renaissance than space allows me to discuss – but probably not many more. Will researchers reclaim them? Unfortunately, the walls of museums still cry out for equality of representation or simply representation. Why, in January 2014, should Tracey Emin feel compelled to say in an interview, ‘Louise Bourgeois has the highest female sales price at auction but it’s so far below her male counterparts, it’s unbelievable. Were she a man it would be ten times more’.

See also the Artistic Miscellany feature about The National Museum for Women in the Arts (NMWA).

This article first appeared in Cassone: The International Magazine for Art and Art Books in the February 2014 issue. The Editor was very grateful to NMWA and the National Gallery, London, for their help securing images for the feature, two of which are featured above with the article.