…fashion is an art form – you might call it decorative or applied art as opposed to fine art, but what’s the distinction? … the same amount of artistic expression goes into clothes, a piece of pottery or a painting. I’ve founded a museum on the basis that I think it’s an artistic form that should be remembered…I don’t think the fact that [fashion or pottery] were designed to be practical distinguishes them from fine art. You could say a painting is designed to go on the wall, but if it were made as a fresco, where it was part of the wall, would you say it was not art because it was practical? 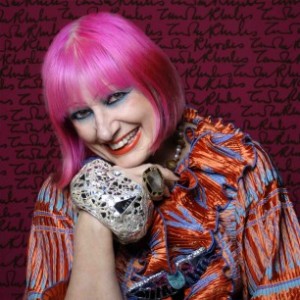 Think of the barriers that the fashion and textile designer Zandra Rhodes encountered when she was trying to establish the Fashion and Textile Museum (FTM) in London. Fashion is a profitable growth industry in the UK, a prestigious export. Public money should be forthcoming. But it wasn’t.

Rhodes began her crusade in 1995. When she was turned down for National Lottery and Arts Council funding, she determined to self-finance the birth of the museum. Her partner, Salah Hassanein, contributed and she sold her house in Notting Hill, London.‘Textile designers in Britain are the Cinderellas of the fashion industry,’ Rhodes told me.

Artist Andrew Logan (whose bust of Zandra is in the National Portrait Gallery) and his partner Michael Davis told Rhodes about a disused distribution centre near their home in Bermondsey, south London. Could it be the foundation for the museum?

Rhodes seized the chance to convert the drab, grey building into what she hoped would be a landmark.  After seeing a house designed by the Mexican architect Ricardo Legorreta (1931–2011) in Los Angeles, she commissioned him to design the conversion. Legoretta’s creation is a striking cubic structure with hot pink and ochre stuccoed exterior walls, plain glass, black-rimmed windows, and spacious, well-lit, galleried exhibition space. It’s the stuff of science fiction in comparison with the weathered, dark grey brick Georgian architecture of Bermondsey.

Local architect Alan Camp executed the final design, incorporating residential accommodation: eight flats to sell and one for Rhodes to live in. This was a challenging, complicated endeavour, Camp reveals. Rhodes lived in the building’s old garage for several years during the renovation,  ‘camping out’. Fortunately the local council planners ‘loved the scheme; they were very supportive’, Camp says. Princess Michael of Kent opened the museum officially in May 2003.

Unfortunately, the museum continued to face financial difficulties; mounting exhibitions is an expensive struggle. Nearby Newham College became its saviour when it bought the freehold. Zandra Rhodes retains a long lease for her flat and studio.

Outreach programmes, a vital component of Rhodes’ dream for the museum, continue to thrive. One of Rhodes’ life-long missions is to increase understanding and appreciation – ‘I use every opportunity I have’ – throughout the world about textiles and fashion and the social and economic value of collaboration between fine art, craft and applied design. Tours, courses, workshops, films and talks, aimed at a wide public, are part of the life of the Fashion and Textile Museum. It will soon become a hub for workshops, surgeries, networking events and mentoring for small and medium-sized (SME) fashion enterprises.

Rhodes’ own work is characterised by the interweaving of fine art with applied design. Indeed, she doesn’t see a conceptual and practical barrier between these fields. As a gifted draughtsman, she translates her drawings into unusually colourful, lyrical, sometimes whimsical, textiles. She brings flat surfaces to life. Neither her sense of inventiveness nor her entrepreneurial initiative ever appear to wane.

Rhodes learned about fabric design at the Medway College of Art in Kent. She’d considered becoming an illustrator, as she loved to draw. She has always sketched snapshots of the world around her; it is these images that have often become the motifs for many of her designs.

Nonetheless, Rhodes opted for textile design rather than illustration, partly because of her reverence for the work of one of her tutors, the textile designer Barbara Brown. Brown later became ‘the golden girl of Heal’s fabric designers’. She took her students to printing and dye companies in Manchester and drilled into them the importance of drawing – ‘drawing is where everything creative comes from’, Brown believed.

Rhodes won a scholarship to study at the Royal College of Art, where she was encouraged to design for paper and print, specifically screen-printing. When she left the RCA in 1964, she and her then boyfriend, Alex Macintyre, a skilled screen printer, set up their own printing studio in West London.

Rhodes became part of the early ‘Swinging Sixties’ youth culture– together with David Hockney, Peter Blake and Patrick Caulfield,   among other artists. Many of the emerging artists inspired and were inspired by a new social and aesthetic order. Fashion textiles revealed Rhodes’ signature. At the time, commercial art was being translated into fine art – Pop art.  Everyday culture became museum exhibits.

Rhodes believed her designs – her art – could and should become part of the fashion and domestic interiors of everyone, not just a select few. The present exhibition at the museum, Artist Textiles, Picasso to Warhol (until 17 May 2014) reflects her perspective.  It displays fabrics and clothes with pictorial designs created by established ‘fine art’ artists during the mid 20th century. Highlights include work by Georges Braque, Alexander Calder, Marc Chagall  Salvador Dali, Barbara Hepworth,   Henri Matisse,  Joan Miro, Henry Moore, Pablo Picasso, Ben Nicholson and Andy Warhol. Exhibits exemplify major 20th-century European and American art movements, as many of the artists whose work is displayed were iconic figures within these trends. These artists regarded textile design as a means of artistic expression.

After the Second World War, the textile industry was a vital component of economic recovery in Britain. Innovative designs for textile manufacturers could increase export sales. The ‘government-sponsored’ Centre for Colour, Design and Style Textile promoted British textiles throughout the 1940s, with exhibitions aimed mainly at the American market.

Manufacturers encouraged and commissioned designs from established artists. The painter Patrick Heron designed for Cresta Silks, his father’s company. Graham Sutherland designed for Horrockses Fashions. On view is a dress printed with one of his designs; it featured in Tatler and The Queen. Horrockses’ dresses were affordable by all and very popular; Princess Margaret and Dame Margot Fonteyn wore them. Henry Moore designed linen wall hangings for Ascher Ltd.

Owning modern art was a social asset. But if you couldn’t own it, maybe you could ‘wear’ it or decorate your sofa with metres of modernity? Number, Please, a silk scarf has a design by Salvador Dali for Wesley Simpson, c.1947, adapted from Destino, a Dali animation for Disney.

In the 1950s, New York-based Fuller Fabrics collaborated with Picasso, Chagall and Joan Miro to produce low-priced ‘fashion yardage’ for the masses.  Miro’s Farmer’s Dinner is especially winsome. Artists represented by Associated American Artists designed fabrics and wallpapers for the textile manufacturers Lowenstein and Sons and Riverdale Fabrics. The book accompanying the exhibition notes that for Irish painter Louis Le Brocquy, helping to found the Kilkenny Design Workshops in the 1960s was an opportunity to integrate art and design as the Bauhaus designers had done.

The exhibition explores how in the 1960s textiles were imprinted with Pop art images.  Advertisements for Christian Dior beauty products inspired Rhodes to create Lipstick, a screen-printed silk crepe, in 1968. It was one of the most popular prints Rhodes sold at her Fulham Road Clothes Shop.

By the 1970s, commercial ventures between established artists and textile manufacturers had ebbed in Britain, America and Europe. They are now unusual: fine art and design exist in separate fields of thought and practice.

The fact that many contemporary artists sacrifice aesthetics for the sake of bold conceptual approaches, for which beauty is not a priority, may be one reason why this is so. Fashion and furnishing are meant to please the eyes. Admittedly, these reflections will court controversy. But before you comment, visit the Fashion and Textile Museum.

For information about the museum’s opening hours, events, programmes and facilities, visit http://www.ftmlondon.org

This article first appeared in Cassone: The International Online Magazine of Art and Art Books in the April 2014  issue.