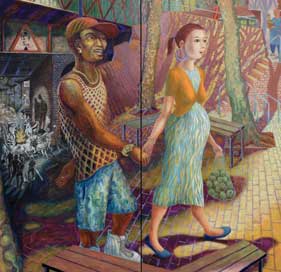 In 2000, the most popular exhibition in Britain, and the fourth most popular in the world, was Seeing Salvation,  a collection of 79 images, created over two millennia, revealing how Western European artists have tried to visualise Christ.  About 360,000 people attended the  ten-week exhibition, which was at the National Gallery in London.

Depicting Christ is an extraordinarily challenging endeavour; in the beginning there was only the word. There are no descriptions in the Gospels of what Christ looked like.  Moreover, early Christians were apprehensive about attempting to portray Jesus. The Second Commandment forbids the making and worshipping of idolatrous images (figurative art was associated with pagan idol worship). Eventually, as non-Jewish converts became relatively more relaxed about the idea of Christian imagery,  symbols (for example, the anchor, inspiring hope, the fish, ichthus in Greek – an acrostic (in Greek) for ‘Jesus Christ, Son of God, Saviour’ – and recalling the power of Baptismal water to bestow forgiveness), word signs, and iconic images were created. The first of these date from around 200 AD, and are displayed in catacombs outside the city walls of Rome. In medieval Europe, mysteriously, Christ’s appearance – that of a long haired, bearded man – came to be likened to that which miraculously appeared on ’St Veronica’s handkerchief’, after Christ supposedly used it to wipe his anguished face while bearing the Cross to Calvary. As a gesture of kindness, St Veronica had offered the material to Christ. The image on the so-called Turin Shroud was also an influence, (See notes below.)

Helpfully, the exhibition images were arranged thematically: ‘Sign and Symbol’, ‘The Dual Nature’, ‘The True Likeness’, and so on – enabling viewers to contrast the various modes of expression and to understand their theological and historical significance. The displays elucidated the influence of Christianity and Christian imagery on Western art. Many historic works of art, both by Old Masters and unknown artists, especially those created up until the Renaissance, were a response to religious themes, and either displayed in places of worship or intended to be devotional in a private context.

One newspaper report noted that ‘Seeing Salvation’ was regarded as ‘box office poison’; it might offend people of other faiths or no faith. Two charities sponsored the exhibition, as the Gallery apparently couldn’t find a commercial sponsor. Admission was free at a time when museums still charged for admission – would people pay to see pictures of Christ?  Regardless, the BBC presented a television series about the exhibition.

But perhaps the feared poison had some of the qualities of an elixir.  People, including columnists, critics and curators, were astounded by the fact that ‘Seeing Salvation’ was so popular in our supposedly secular age. (Sixty thousand copies of the catalogue were sold.) Is the world so shy of Christianity?

Moreover, given worldwide publicity, the increase in tourism from non- Western nations, and a concomitant interest in Western cultural heritage, are numbers that surprising? Even if one does not subscribe to the message, one can uphold the beauty and humanistic relevance of Christian iconography, appreciate its informative value and transcending power. You can understand how Rembrandt and Graham Sutherland speak to us about love, compassion, suffering, and redemption.

The Gallery received about 300 letters of appreciation. In an article in The Pastoral Review, the curator, Gabriele Finalde, reveals that  ‘there was a hushed and reverential atmosphere in the exhibition rooms… Some visitors also decided to pray in the exhibition…On one occasion I noted that an Anglican bishop… was approached by a visitor who asked for a blessing, They retreated into a darkened corner of Room 5′.

The exhibition confirmed that Christian imagery is not necessarily alienating, even though one may not believe in the subject. It is relevant to the here and now, whether we’re looking at it in a museum or in one of the churches and cathedrals visited by so many people (in Britain, about 32 million people annually).

Ironically, though, there was long period after the Reformation when art became relatively more secularised, not necessarily for lack of belief but because many Protestants associated art with sinful pleasure, papal indulgence and the patronage of the unduly wealthy. Since the mid twentieth century, however, contemporary art in churches and cathedrals has slowly become a feature on the cultural landscape. Cathedrals and churches are adopting arts policies, enabling artists’ residencies and appointing staff with responsibilities for developing an arts programme.

The movement was first championed by George Bell (1883–1958), a former Bishop of Chichester, and thereafter by Walter Hussey (1909–85), a former Dean of Chichester. Both men encouraged a modern and generous attitude to the arts. They believed firmly that modern art and unfamiliar forms could enhance tradition by making us perceive its contemporary relevance.

This development, however, raises questions about the nature of the commissions and displays. Should the work merely enhance the physicality of the context? Should it at least inspire a sense of the numinous? Should it reflect universally appreciated Christian values, be assuredly prescriptive, or purposely challenge perceptions of Christianity – encourage conversation? Should contemporary art in a cathedral have a different catchment ‘area’ than that for a church? Should the artist be a believer, ‘famous’, worthy of a Tate exhibition?

To prove the importance of the art commissions to the way we live now, measured responses are vital. Otherwise the artwork could be seen as vacuous ecclesiastical indulgences.

For a thoughtful and informed response, I met with artist Mark Cazalet. Mark chaired the working group for the Church of England’s recently published guidelines for parishes and artists involved in commissioning art for places of worship  Over the past 20 years Mark has undertaken many ecclesiastical projects (including ones for Chelmsford, Manchester and Worcester Cathedrals) of varying scale in different media. He teaches at West Dean College and the Prince’s Drawing School..

‘The nature of the art commissioned could, but doesn’t have to, reflect the role of the religious institution,’ considers Mark. ‘For example, cathedrals are embassies of the Church, national voices, speaking with a relatively more established and authoritative status. They’re seen as standard bearers. They might very well go for big names with big money, or feel they ought to, especially if benefactors are big names themselves and appreciate this strategy. Cathedrals might feel their physicality and notoriety should match the scale of commission, opt for what’s provocative rather than prescriptive because they have visitors from all faiths who don’t share a symbolic visual language.’

But Cazalet is uneasy – he questions whether, as cultural pilgrims, cathedrals ought to walk the ‘big name’ path? Is this really the right spirit? ‘Do we really want a watered down version of the polemic? Christ engaged people, why shouldn’t we do so with art.’ We agree that parish churches may feel more confident being prescriptive; the congregation shares the images.

Mark is not apologetic about embracing Christian art that is imbued with missionary zeal and that reinterprets the Bible in a contemporary context, addressing today’s social issues: child abuse, AIDS, gay priesthood, slavery, womanhood, equality of choice. Artists have to want to face the big questions concerning sex, death, birth, war, though they don’t have to be believers.

I look at Mark’s ecclesiastical work, which nearly always features people  – the shapes of the figures remind me of Stanley Spencer’s – in contemporary dress and settings, performing everyday activities. His colours are gentle, toned with shafts of light.  The prodigal son has a square angry jaw; he wears earphones and a baseball cap. The Holy Family shares a pizza. A young man and woman – possibly teenagers – are touching each other gently.

Mark’s is the only Christmas card we’ve kept this year. It pictures his Women of the Bible Triptych, commissioned for a girls’ school in Romford. The women, of all ages and shapes, dressed casually in contemporary dress, are featured in everyday locations in Romford – the market, the park, on a running track near a cemetery. In the middle stands a pensive Deborah behind the issuing desk in a library, in front of a little boy. She has brown shoulder-length hair, wears glasses and a wooden cross around her neck. The dominant shape is the Trinity triangular. Deborah (Judges 4) is considered one of the greatest women in the Bible – a prophetess and judge, sensitive to sexism, and great battle leader of the Israelites. With Mark I listen through my eyes. Amen.

At least three cloths are associated with the Crucifixion of Christ: the Sudarium (sweat cloth) of Oviedo (Spain), thought to have been wrapped around Christ’s head; the Turin Shroud, in  which it is claimed that Christ’s body was wrapped, which bears the image of a man’s face and body; and Veronica’s veil (or handkerchief, ‘the Veronica’). When Christ was on his way to Calvary (the story goes) he wiped his face on St Veronica’s veil (or kerchief) leaving an imprint of his features on it.  This story is not in the Gospels and appears to be a medieval invention (the name Veronica means ‘true icon’). None of these cloths was venerated until the middle ages. A cloth purported to be Veronica’s veil was publicly shown in Rome in 1207 and many copies were made. Either the ‘original’ or one of the copies is in St Peter’s Basilica. The image-bearing Veronica is also referred to as a sudarium, so there may have been some conflation of stories with those of the Oviedo Sudarium and the Turin Shroud. There is evidence linking the Shroud and the Sudarium to first century Palestine, but the Veronica has not been scientifically examined.

For more information, refer to previous articles in ‘Artistic Miscellany:  ‘Art in Chichester – the sacred and the secular’ and ‘Sacred art at St. Paul’s Cathedral’.

This article first appeared in Cassone: The International Online Magazine of Art and Art Books in the April 2012 issue.