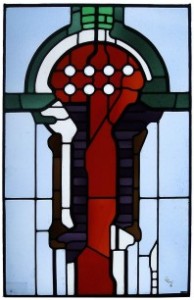 For eight years my husband and I attended the annual Carol Service at Eton College Chapel while our sons were pupils at the school.  During these evenings we marvelled at the mostly Gothic architecture and elaborate furnishings of the church, the rich heritage of Henry VII’s chapel. But I’m ashamed to admit that we merely glanced at the modern, highly acclaimed stained glass windows by Evie Hone and John Piper. (A Second World War bomb dropped in 1940 shattered all the Chapel glass except that in the window above the organ.) Other parents have admitted much the same. For the windows appear dark and gloomy. Outside, there’s no incandescence attracting us to look at them. Night is no lover of stained glass.

Traditionally, stained glass is conceived as ‘…pieces of coloured glasses put together with strips of lead into the form of windows; not a picture painted on glass with coloured paints’, as Christopher Whall, a distinguished stained glass artist, has noted. Usually painted details, such as those on the faces, robes, drapery, landscape, are included. Firing attaches the paint to the glass.

When working with stained glass, many factors are considered; every factor interacts with another. In the realms of conservation, restoration and re-creation it is necessary to take account of the advancement, or lack of, technical innovation and artistic influences corresponding to the period of production. For instance, the conservator would not use enamels to restore details on stained glass windows dating from the 13th century because enamels did not exist before the 16th century.

Should the glass be fused or layered to build up colour and tone? How should the colours be distributed? Should white glass be placed in between certain colours to lighten their effect? Do we use old (rescued fragments) or new, hand blown or manufactured glass? Which textures might enhance? Sandblasted? Will we acid-etch, and engrave? How thick should the lead lines be?  What will be the effect of the supporting bars?

‘Stained glass is the only decorative art form that responds to transmitted light…’ notes Caroline Benyon, the chairman of the British Society of Master Glass Painters. ‘We paint with light and then we modulate it…once it’s all in place, we can’t go back and change it!’ Benyon learned the craft by ‘osmosis’ as her father, Carl Edwards, was also an eminent stained glass artist.

A new commission, whether for a faith-based, civic, commercial or domestic setting, should complement the architecture. ‘A window, unlike an easel picture, is not a space into which one pours one’s liquid soul,’ commented C. Rupert Moore, who was associated with the renowned British glass company Whitefriars (now no longer operative). The artist may strive to complement themes explored in the other windows. Would a fresh interpretation be well received? Should the creation avoid being too prescriptive or figurative in order to capture the senses of a multitude of different faith-oriented viewers? Would a geometric background suit a rectangular or square-shaped window? Which colours would complement the colour of the masonry? If the other stained glass windows in place are light and delicate, should we strike a balance?

We consider the light of the land around. Is there a brick wall, a skyscraper or an unobstructed landscape behind the window? The position of the window and the size of the building affect the proportions of the design. ‘In the great windows of the nave of Notre Dame in Paris, it has been necessary to increase the size of the head of the saint in proportion to the rest of the body, so that from the nave the proportions appear correct,’ once observed French stained-glass artist Max Ingrand.

Should a stained glass designer be capable of executing her creation? Benyon feels that ‘only a stained glass designer who has a comprehensive understanding of the inherent properties of glazing materials and glass paint and the way they react to transmitted light can produce well designed glazing. A knowledge of architecture and an understanding of scale are also essential…we’ve been presented with designs that would have either looked terrible when completed or were impossible to make because of the shapes’.

Admittedly, stained glass artists and craftsmen (such as glaziers and metal fabricators) do usually work in collaboration; they also work closely with the architect. Keith Barley of Barley Studio elaborates one example:

In 1996 we worked with stained glass artist Patrick Reyntiens and architect Martin Stancliffe, creating stained glass for the west window of Southwell Minster. The architect wanted stained glass that delivered the same silver and yellow glow as that created by the collection of 15th-century glass fragments that fill the west window of Winchester Cathedral. We advised on the execution of the design in terms of glass and pigment choice, and assisted in its creation – cutting the glass in preparation for the artist to paint – the leading and installation.

Such collaboration later inspired the Studio to employ award-winning stained glass artist Helen Whittaker to develop new ideas for commissions. These have since included stained glass for Ely Cathedral, Beverly Minster and the RAF Club in London.  ‘In my work,’ explains Whittaker, ‘I’m involved in the entire process, from design conception to installation.  I enjoy the interplay between art and craft.’

At present, Barley Studio is working with Royal Academician Hughie O’Donoghue to produce two stained glass windows for the apse of the Henry VII Chapel in Westminster Abbey. O’Donoghue, an abstract figurative painter, has limited experience of working with architectural glass. In this case Whittaker is interpreting O’Donoghue’s painting into glass, forming a similar partnership to that of painter John Piper (1903–92) and Patrick Reyntiens, who was entrusted with interpreting the former’s designs. Piper and Reyntiens worked together on Coventry Cathedral when it was being rebuilt after the Second World War.

To find out more about stained glass it’s well worth visiting the Stained Glass Museum at Ely Cathedral.  Dating from the 13th century to the present, almost all the exhibits have originated in Britain and Europe. They are appropriately lit and presented chronologically with clearly written explanatory panels.

Unfortunately many specimens were destroyed in the 16th and 17th centuries during the religious upheavals experienced throughout Europe. Henry VIII’s break with Rome led to the destruction of many churches and their contents. Iconoclasm also entailed the destruction of ecclesiastical stained glass windows during the English Civil War.

When few could read and write, stained glass windows in church instructed the congregation in the Christian faith, illustrating Biblical stories and aspects of the lives of the saints. Wealthy donors, hoping to be remembered in the prayers of the faithful, paid for windows that included their portraits as well as saintly images. Clear glass provided less expensive windows for poorer churches. During the 13th and 14th centuries figures were often positioned under decorative canopy-like shapes.

By the end of the medieval period wealthier people sometimes glazed their houses with stained glass quarries and roundels. Sets of subjects – the Four Seasons and Signs of the Zodiac, for example – were popular. During the 16th century new materials became available, such as an increasing range of enamel colours that could be painted and fired onto clear glass. It was no longer necessary to cut coloured glass into shapes to create a design or rely on yellow stained glass for highlighting hair, haloes or crowns.

Enamels enabled much more colourful and pictorial detail. Stained glass began to resemble oil painting; more realistic painting styles were adopted. Indeed, one of the exhibits, on loan from Windsor Castle, features George III in stained glass. It is attributed to the glass painter James Pearson and based on a portrait painted by Joshua Reynolds. This genre continued well into the 1800s. Restoring these windows involves fine draughtsmanship skills.

In the 19th century a revival of the Gothic style, for social, political and aesthetic reasons, coincided with the building of many new churches to cater for the inhabitants of the expanding of towns and cities. Augustus Pugin, acclaimed for his interior design of the Palace of Westminster, played a pioneering role in the Gothic Revival. As a result of the technical experiments of Charles Winston, the properties of mediaeval glass could be recreated as what became known as antique glass. Works drawing on the two-dimensional art of the Middle Ages, and with relatively more original themes – pageantry and the romantic – began to appear. William Morris and his circle were notable contributors.

The Museum also features the stained glass work of artists, such as Mary Lowndes, Evie Hone, Harry Clarke and Carl Edwards, associated with the Arts and Crafts movement pioneered by Christopher Whall. Modern and contemporary work includes that of John Piper, Ervin Bossanyi, Patrick Reyntiens, Mark Angus and Brian Clarke. Contemporary work is characterized by the use of a wide variety of techniques and materials. Abstract and geometric designs are prevalent.

We can hope that stained glass will one day be the subject of crowd-pulling major exhibitions, as it is very much a part of our cultural heritage and the contemporary art milieu. Unfortunately, vocational and educational opportunities are too few. There is scope for innovation and enterprise. More light on stained glass, please.

Photograph of The Cross by Mark Angus, 1978, courtesy of The Stained Glass Museum.

This article first appeared in Cassone: The International Online Magazine for Art and Art Books in the April 2013 issue.