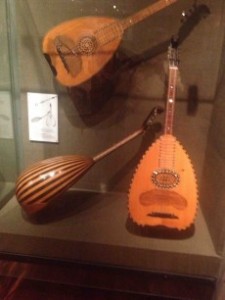 Most tourists visiting Greece explore the nation’s archaeological ruins and bask in the sun on a sandy shore.  They return home just vaguely aware of the country’s enriching folk heritage. Perhaps they listened to bouzouki music while they dined on roast lamb with garlic, oregano and lemon after exploring the Acropolis. They never realized that while en route to the Parthenon they had passed by an enchanting museum of Greek folk instruments housed in a primrose yellow, stuccoed, neo-classical mansion. When we were searching for this little-known museum, the only person we could find who could direct us was a man who owned a musical instrument shop.

Together with the Centre for Ethnomusicology, the museum was established in 1991 to display the collection of over 1000 Greek instruments donated by the esteemed musicologist Phoebus Anoyanakis. The exhibits reveal the development of both Greek island and mainland music. Instruments are displayed, with clearly written informative panels, in well-lit cases on three spacious floors. We learn while not feeling overwhelmed with complicated detail.  Visitors can listen to musical recordings with headphones. 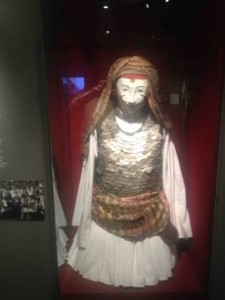 In the lower ground floor, church and livestock bells and cymbals; colourful, clay, small jug-shaped water whistles; wooden clappers, conchs, and flutes are exhibited. We see coin jewellery, which is worn on traditional Greek costumes and helps to enliven rhythmic dance movement.  Drums, tambourines and wind instruments are displayed on the ground floor, including tsampouna, which are double-chantered (two-piped) bagpipes, made from goatskin; the body is a large, white shapeless sack.  We learn that the zournas is an oboe-type instrument with a double reed. The word zournas comes from Turkish. The zournas may be made from olive, beech, cherry, walnut or maple wood in various sizes ranging from 22 – 60 cm in length.  It is usually played outdoors because of its penetrating sound, and is accompanied by the daouli (drum). The daoli is a double-sided instrument, of variable diameter, hung from the musician’s shoulder, and played with sticks. Goat or donkey skins cover the ends.

On the first floor there are the string instruments, including the santouri (a trapezoid-shaped stringed instrument sounded by striking the keys with baton-shaped sticks), the bouzouki (pear shaped with a long neck, the six paired strings are plucked with a plectrum) and the Cretan lyra (a bowed, three-stringed, also pear-shaped instrument). Guitars and mandolins (with four pairs of strings, which are plucked or strummed) also feature. The instruments are so pleasing to look at because of their polished wood bodies and simple decoration. One wishes to touch and stroke as well as play them.

There is also discussion of rebetika, ‘Greek blues’, the music of the ‘underworld’ – such as that of the people who smoke hashish, are imprisoned, and suffering from poverty – the lost and wandering living on the margins of society. It is they who brought this version of ‘blues’ with them when they were seeking refuge from the Turks in 1922. The music has a sad and haunting aura. The chief instruments are the bouzouki and its more high-pitched version, thebaglamas, whose smaller size makes it easier to hide and transport. If you have ever watched the film Zorba the Greek, you will have heard a modern version of rebetika playing.

Historic engravings, coloured and black and white, of musicians and folk dancers help to set the instruments in a social context.  I particularly warmed to the poignant films and photographs, in both colour and black and white, of musicians playing, some dressed in traditional costumes. The exuberant facial expressions of the players make one yearn to clap and dance to the music of the time. These films enhance  the experience  of the archaeological sites already visited.

The Museum organizes lectures and seminars and educational programmes for students of all ages. Concerts are held in its tranquil garden. The shop sells instruments, CDs, souvenirs and a scholarly choice of books about Greek folk instruments, as well as musical scores.  There is a reference library for research. The staff are very enthusiastic.

One leaves the museum wishing there were Greeks and Romans transported from the past who could guide us through the ruins of the agoras, punctuate them with life – scents, sounds and conversation. This museum brings Greek culture to life.

Visit www.instruments-museum.gr to find out about opening hours and educational programmes, lectures and concerts at The Museum of Greek Folk Musical Instruments and  http://www.youtube.com/watch?v=wJDJloPBN08 to hear rebetika music.

Photographs of lutes/ouds (outi in Greek) and the celebration costume covered in coins by Stehen Kingsley and courtesy of the Museum of Greek Folk Musical Instruments.

This article first appeared in Cassone: The International Online Magazine of Art and Art Books in the November 2013 issue