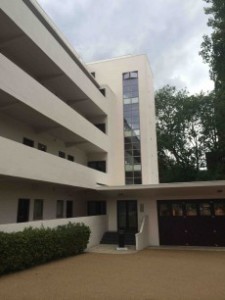 The Isokon Gallery is housed in the former garage of an apartment block that looks somewhat like a giant ocean liner missing its funnels, as Agatha Christie, a former tenant, once described the building. The gallery explores how the building, known as the Isokon or Lawn Road Flats, came to be. The building was established as a manifesto in concrete, for social and artistic experiment. Sensitive restoration, Grade I listing by English Heritage, and the gallery ensure its enduring legacy.

The developer of the Isokon was Jack Pritchard (1899–1992), who was born in Hampstead, not far from the site of his creation. After serving in the navy, Jack studied engineering and economics at Cambridge, where he met his future wife, Molly. The couple had enlightened views about living in the modern age.

Cambridge, wrote Pritchard, brought ‘colour and shape to so much of my life.’ There he was inspired by Philip Sargant Florence’s lectures about industrial psychology. Florence taught that ‘machines should be designed to fit the man, not vice versa’.

Through Florence, Pritchard befriended Henry Morris, secretary to the Cambridgeshire County Education Committee, another great influence upon his life. He was intrigued with Morris’ idea of ‘The Village College’, a centre for life-long learning, which would offer academic and vocational courses, leisure and sports activities. Its construction should exemplify ‘creative architecture’ – a means and reflection of socially progressive change, as Jack later determined the Isokon should be.

After working with the Michelin tyre company as a graduate trainee, Pritchard joined Venesta as a marketing manager, which also proved a fruitful experience. The firm was the sister company of Luterma, an Estonian furniture and plywood company. It produced utilitarian furniture for offices and domestic use: ‘Furniture for Everyone’ based on modern designs using standardized forms and interchangeable modular units, affordable and relatively easy to manufacture and install – the type of fittings later featured in the Isokon flats. This furniture, compact, practical and free from frivolous and intrusive adornment, suited the lifestyle of busy urban men and women of the 20th century, the ‘machine age’. Several modernist architects whom Prichard met while travelling in Europe for business also appreciated, and designed, such utilitarian furniture. Unsurprisingly, he commissioned the modernist architect Le Corbusier to design the Venesta stand at the Building Trades Exhibition in 1930.

Pritchard hoped that the British would eventually appreciate plywood for its intrinsic suitability for innovative and functional designs, such as flush doors, an initiative he pioneered after visiting the Bauhaus in Germany. When would plywood no longer be stigmatized as ‘cheap’? It was malleable and less inclined to warp or shrink than traditional woods.

When architect Wells Wintemute Coates (1895–1958) called at the Venesta London office, Pritchard’s hopes were raised. Coates was using plywood for the interiors of the Cresta textile factory in Welwyn Garden City and Cresta dress shops. Wells Coates and Pritchard were of ‘like minds’. Shortly thereafter, the Pritchards commissioned Wells Coates to design their family house, which was to be built on a site they had purchased in Lawn Road.

Wells Coates was brought up in Japan, where his parents were Canadian Methodist missionaries. He studied engineering in British Columbia, and thereafter in London where he obtained his PhD. (Coates was a self-taught architect.) In addition to his most well-known achievement, the Isokon, Coates is noted for his studio designs for the BBC, apartment blocks for Embassy Court in Brighton and 10 Palace Gate in Kensington and designs for electrical products and yachts. In 1933, Coates was one of the founders of the Modern Architectural Research Group (MARS), the British wing of the Congrès International d’Architecture Moderne (CIAM). Coates believed that buildings should be ‘machines for living’ and that furniture should be a complementary part of the architecture. Coates wrote that:

as architects of the ultimate human and material scenes of the new order, we are not so much concerned with the formal problems of ‘style’ as with an architectural solution of the social and economic problems of today. And the most fundamental change in our technique is the replacement of natural materials by scientific ones, and more particularly the development of steel and steel concrete construction.

Eventually the Pritchards abandoned the idea of a family house in favour of constructing ‘unit dwellings’ – Isotypes – to be produced by Isokon, a firm established by Pritchard in 1931. Finally, they determined that Isokon should develop a site-specific block of flats – the Isokon or Lawn Road Flats – embodying modernist architectural features and the associated socially progressive values shared by Wells Coates and the Pritchards.

The ‘minimal’ flats would be for professional men and women with few possessions on modest incomes. Domestic services, such as bed making, cleaning, shoe cleaning and laundry would be offered. Simple meals could be prepared upon request and delivered via a dumbwaiter. A full-scale model of an Isokon Minimum Flat was displayed at the Exhibition of British Industrial Art in Relation to the Home, Dorland Hall, Regent Street, in 1933.

The L-shaped Isokon was the one of the first modern apartment buildings to be built in Britain with reinforced concrete. The concrete was four inches thick and insulated internally with an inch of compressed cork slabs. A waterproof and tinted (pinkish) cement wash was applied externally to the concrete face. The roof was flat; the windows were encased in metal.  As the main line railway tunnels from St Pancras ran under Lawn Road, a cantilever was constructed over the tunnels at either end.

Within four storeys, there were 32 flats, including studios, single ‘minimum’  flats and double flats, and housekeepers’ flats. The Pritchards occupied a large penthouse apartment with a self-contained annexe for their sons, Jonathan and Jeremy.  Exterior walkways linked the flats, together with diagonal external stairs and an internal stairway.

Each ‘minimum’ flat had a small kitchen with a cooker, refrigerator and storage space, a dressing room with fitted cupboards, a basin and a concealed lavatory, and a sitting room with a sliding table, bedstead and mattress. The double flats had a larger bed and round table. Each flat had a telephone to the ground floor kitchen. The studio flats did not have kitchens, though they were supplied with a fridge, hot plate and sink. The Isokon company, no longer contemplating producing housing units – Isotypes – ventured on to produce plywood furniture. The Isokon became home to writers, artists, intellectuals, civil servants and other professional people (including spies): a cosmopolitan milieu.

Maintaining the services and structure of the building was a costly and ceaseless burden. During the war many tenants left London; some lost their jobs.  After the war, many of the émigrés who had settled in the Isokon went abroad. Insisting on three-year leases made it difficult for the Pritchards to attract residents.

In 1969, the Pritchards sold the Isokon to the New Statesman. They had wrongly assumed that the publishers of a socially progressive publication would be concerned to preserve the building’s architectural integrity. But alas a few years later the magazine sold the Isokon, in a poor state of repair, to Camden Council for a sizeable profit. The Council did not have sufficient resources to renovate the building. In 2001 the Notting Hill Housing Group/Avanti Architects team won a competition to restore the Isokon, which involved replacing the asphalt membranes, upgrading the insulation, renewing the floor and wall finishes and refurbishing or replacing the metal work and joinery. 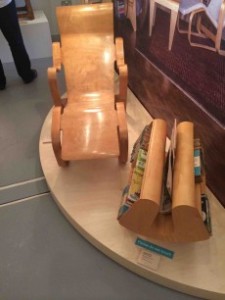 The bright, airy Isokon Gallery is partitioned into sections. Each area explores different aspects of the Isokon’s development and social history.  Information boards featuring architectural diagrams, lucid explanatory text and photographic images focus on such topics as the Bauhaus, the residents (including the numerous supposed spies), Isokon, Wells Coates, the Pritchards and the refurbishment programme. Exhibits include furniture manufactured by Isokon, original or reproduced, such as the Isokon Long Chair, the Penguin Donkey (a book and magazine case), the Bottleship (for glasses and bottles), dining tables and chairs, an almost original kitchen and a dressing room, and the Pritchard’s copper-faced plywood front door, which looks like the door to an ocean liner cabin.

If Coates and Pritchard were alive today, what would they envisage for an environmentally healthy future?

For further information about the Isokon Gallery, please visit http://isokongallery.co.uk/.

This article first appeared in Cassone: The International Online Magazine of Art and Art Books in the January 2015 issue.